Iranian forces on Friday seized the British-flagged oil tanker Stena Impero in the Strait of Hormuz, a geopolitically vital sea route connecting the Persian Gulf and Gulf of Oman. The move has escalated tensions even further amid already strained relations between Tehran and Western powers, which took a nosedive after the U.S. withdrew from the Iran nuclear deal last year.

Iranian authorities claimed the Stena Impero was “violating international maritime rules.” But the country’s leaders have also suggested the seizure was retaliation for Britain’s role in detaining an Iranian tanker earlier in July.

Outgoing British Prime Minister Theresa May on Monday called the Stena Impero incident “unacceptable and highly escalatory.” But the U.K. hasn’t yet revealed how it will respond to the tanker’s seizure.

Here’s what to know about the Stena Impero and its connection to rising tensions between Iran and Western powers.

What is the Stena Impero and who was on board?

The Stena Impero, a U.K.-registered oil tanker, was traveling to a port in Saudi Arabia on Friday when Iran’s Revolutionary Guard stopped it in the Strait of Hormuz and took it to the nearby Iranian port of Bandar Abbas.

The vessel’s crew of 23, including Indian, Latvian, Filipino and Russian nationals, are believed to be in “good health,” according to a statement from Stena Bulk, the company that owns the Stena Impero. The company said it has made an official request to visit its crew members, but Iran has not yet formally responded.

Audio of the incident shared Sunday by a risk consultancy group features what is allegedly an English-speaking member of the Revolutionary Guard telling the Stena Impero crew to alter their course. “If you obey, you will be safe,” they said.

Why is the Strait of Hormuz important?

The Strait of Hormuz, off Iran’s southern coast, is a crucial waterway for international oil flows, with 17.4 million barrels passing through each day. That’s around a third of all oil transported by sea, and a fifth of the world’s total oil supply.

Members of the international oil alliance OPEC, including Saudi Arabia, rely heavily on the Strait of Hormuz, which is only 21 miles wide at its narrowest point, to export their oil to the rest of the world.

The seizure of the Stena Impero has highlighted how international tensions have left vessels passing through the chokepoint increasingly vulnerable. Crude oil prices spiked by more than 2% Friday after the ship was seized.

Why did Iran stop the Stena Impero?

Iran’s relations with the U.S. and other Western countries have been steadily worsening since May 2018, when the Trump Administration unilaterally pulled the U.S. out of the 2015 deal it struck with Iran — along with the U.K., France, Germany, Russia and China — in order to curb Tehran’s nuclear program. The U.S. reimposed sanctions on Iran, aimed at crippling its economy. Though European powers have not abandoned the deal or imposed sanctions on Iran, the country’s oil exports have now fallen to their lowest levels since the 1980s.

The fallout from the U.S. withdrawal, as well as instability from the war in nearby Yemen, has led to a series of incidents in the Gulf Region since May. The U.S. has blamed Iran for several attacks on oil tankers, and both countries claim to have shot down each other’s drones. Iran also said Monday it arrested 17 of its citizens accused of being spies for the American CIA and had already sentenced some of them to death.

Iran’s ruling Guardian Council has implied that taking the Stena Impero was an act of retaliation for the seizure of an Iranian vessel off the Spanish territory of Gibraltar earlier in July. British marines helped to detain the vessel, which the U.K. said was illegally transporting oil to Syria. “[The] rule of reciprocal action is well-known in international law,” a Guardian Council spokesman was quoted as saying by Iran’s semi-official Fars news agency.

How will the U.K. respond to the Stena Impero seizure?

The U.K. — which is awaiting the results of Tuesday’s Conservative Party leadership race to determine its next prime minister — faces a complicated calculation in responding to the seizure of the British-flagged vessel.

British Foreign Secretary Jeremy Hunt — one of the two men in the running to be the next prime minister, alongside favorite Boris Johnson — has warned of “serious consequences” if Iran doesn’t release the Stena Impero.

But Hunt also stressed a desire to “deescalate” the situation. The U.K., which remains committed to salvaging the Iran nuclear deal, will likely hesitate to reimpose sanctions against Iran lifted as part of the agreement.

The country has also not yet confirmed if it will join the “multinational maritime effort,” dubbed Operation Sentinel, being planned by U.S. Central Command “to increase surveillance of and security in key waterways in the Middle East to ensure freedom of navigation in light of recent events in the Arabian Gulf region.”

Hunt is due to speak to lawmakers about the U.K. response on Monday afternoon local time. 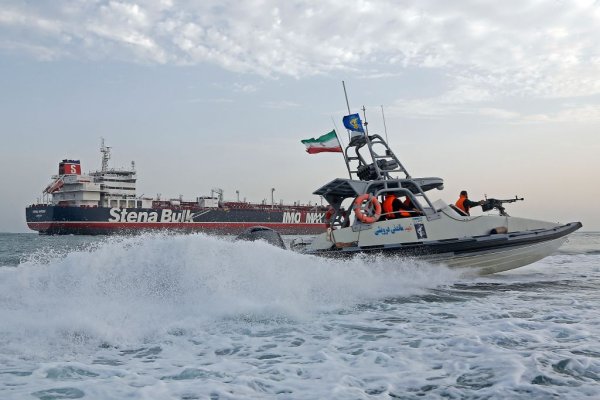 Iran Plans to Execute Some Accused CIA-Trained Spies
Next Up: Editor's Pick