Iran, locked in a worsening political standoff with Western powers, has handed down death sentences to several nationals accused of being part of a CIA-trained spy network uncovered earlier this year, an official said on Monday.

Seventeen people were arrested in all, a senior intelligence official told foreign media in Tehran. None of the suspects are dual nationals, according to the official, who declined to be identified and didn’t say how many were sentenced to death.

The announcement marks a show of force by Iran at a time of turbulent ties with the U.S. after the Trump administration withdrew from an 2015 nuclear accord with the Islamic Republic and reimposed crippling sanctions on its economy.

The friction was made worse by a diplomatic crisis between Iran and the U.K., which seized an Iranian oil tanker in Gibraltar earlier this month, saying it carried oil bound for Syria in violation of United Nations sanctions. Iran responded by holding a British tanker on Friday near the Strait of Hormuz, a shipping chokepoint through which about 40% of the world’s seaborne oil travels.

The Iranian Intelligence Ministry has detected an uptick in U.S. efforts to recruit spies in Iran since the election of President Donald Trump in 2016 and the appointment of Gina Haspel as director of the CIA last year, the official said.

Iranian officials have identified the CIA agents who had recruited the suspects as diplomats based in Turkey, Zimbabwe and Finland.

A program aired by state television on Monday showed clips of Trump and National Security Adviser John Bolton with Hormuz as the backdrop. The show identified the alleged members of the cell and contained what the network said were confessions by the accused, whose faces were blurred and voices distorted.

The alleged spies were trained by the CIA to gather classified information from sensitive locations in Iran including military bases, nuclear facilities and economic centers, the official said. The American spy agency lured recruits by promising residency and jobs in the U.S. and safe passage out of Iran, setting up shell companies as a cover to approach and hire Iranians, he added.

(Updates with the state-television program in seventh, eighth paragraphs.)

–With assistance from Ladane Nasseri and Arsalan Shahla. 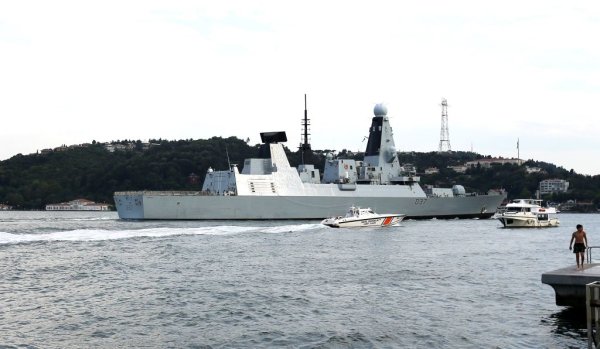 U.K. Seeks to Ease Tensions in Persian Gulf With Iran
Next Up: Editor's Pick