Neil Armstrong and Buzz Aldrin Were Supposed to Nap After Landing on the Moon, But They Couldn't Wait to Walk

Five decades ago, as astronauts traveled to the moon for the first time, TIME watched closely, along with the rest of the world. The magazine documented not only the moon landing but also the hopes and fears in the lead-up to the journey. This week, TIME looks back to that era and ahead to the new space race. To mark the anniversary, we’re also looking back to the original issues that ran shortly before and after Apollo 11.

The July 18, 1969, issue of TIME, with its special supplement on the moon, provides a detailed account of the original plans for the journey. The July 25, 1969, issue (for which the editors delayed the magazine’s usual print time in order to get the Sunday event into its pages) reports what actually happened — and how reality deviated from the plans, even if in small ways.

Or really small ways — as in, milliseconds.

All eyes were on the astronauts as they prepared to take flight. “Lift-off was nearly perfect,” the magazine reported. “Rising Phoenix-like above its own exhaust flames, a scant 724 milliseconds behind schedule, the giant rocket shook loose some 1,300 lbs. of ice that had frozen on its white sides. Although it was the heaviest space vehicle ever fired aloft — 6,484,289 lbs. at ignition — it cleared the launch tower in twelve seconds.”

Lift-off was not the only thing that didn’t exactly go according to plan, though. After landing on the moon, Armstrong and Aldrin planned to check for any damage suffered in the landing. If there were any serious issues, like leaking fuel or falling pressure in their cabin, they would have to abort the mission. Even if everything appeared to be in order, they were supposed to “have a brief snack, sleep for four hours and eat a leisurely dinner” before donning “their bulky space suits, visored helmets, boots and gloves” to step outside.

But that’s not what happened, as TIME reported in the aftermath:

Some things did go according to plan, though. (And Armstrong and Aldrin, who took a few hours to get ready to walk and spent nearly 22 hours on the moon, did rest later.) The astronauts had several key tasks, including collecting and examining the lunar soil and rocks and setting up a camera for the world to watch. They got to work, quickly:

Their camera captured the attention of the entire world from the moment the astronauts took off:

Audiences also tuned in for some light-hearted content, even after the astronauts had planted an American flag on the surface of the moon and proceeded to make their way back home. Astronaut Michael Collins played with the television camera the team had been given, joking to audiences, “O.K., world. Hang onto your hat. I’m going to turn you upside down,” before rotating the camera.

Thomas Paine, NASA Administrator at the time, was so optimistic about the future of progress in space flight that he predicted vacations on the moon — for as little as $5,000 for a round trip — within two decades of the moon landing. “A visitor to a domed lunar resort will be able to don a pair of wings and flap off like Icarus into the artificial atmosphere, using only muscle power to fly,” TIME explained. More than 50 years later, no tourists have made it to the moon yet. But rival billionaires and powerful companies are now pushing the economic, technological and geopolitical boundaries even further in a new race to the moon. 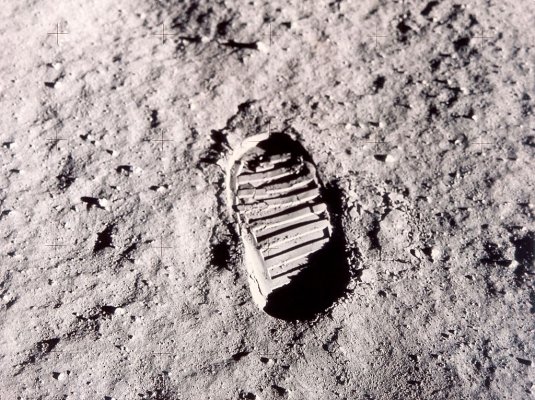 'We Need That Boot Print.' Inside the Fight to Save the Moon's Historic Sites Before It's Too Late
Next Up: Editor's Pick