Taking over with the Area 51 raid apparently isn’t enough to sate the Internet’s hunger for collective force. Following the rabid success of the “Storm Area 51” Facebook event-turned-potential-meme of the year, there’s been an apparent uptick in “storming” events all around the world.

While the original “Storm Area 51, They Can’t Stop All of Us” Facebook event has garnered 1.5 million potential attendees to date, it’s been clear that the event was a moment of collective jest for the Internet, who quickly created out-of-this-world memes and jokes about it. That humor was somewhat lost on the Air Force, who went so far as to make a statement that “any attempt to illegally access military installations or military training areas is dangerous.”

The playful spirit of “Storm Area 51,” however, is now being reincarnated in new events around the globe. From Australia to New York City, it’s clear that this meme and movement has arrived. Read on for a guide to the other places that the Internet wants to storm.

Following in the creators of “Storm Area 51″‘s search for alleged sightings of life unknown, fans of the Loch Ness monster have upped the ante by creating a Facebook event of their own, appropriately titled, “Storm Loch Ness, Nessie Can’t Hide From Us All.” The search for the beloved creature who “lives” in the Loch Ness has garnered 21k people who have committed to the event, with 43k who have expressed interest in it. The volunteer Royal National Lifeboat Institution, who patrol the Loch Ness, has cautioned against people storming the loch, especially since their unit has less resources than the US military at Area 51.

“With no US Army involved, Loch Ness looks a little less hazardous than storming Area 51, but here we have our own set of problems,” she said in a statement to the BBC, while noting that the waters of the Loch Ness could be extremely dangerous. “Our Atlantic 85 lifeboat has an impressive survivor-carrying capacity, but even that will be stretched by the ‘attendees’ of this event.”

In a now-deleted Facebook event, users were invited to “storm the woodchip pile,” which is exactly what it sounds like: a gigantic pile of woodchips in the Port of Burnie, Tasmania. Australia’s The Advocate reports that the event, which had over 550 interested people, was created by Hellyer College student Alex Harman.

“There’s not many places in Australia where there’s just a really big pile of woodchips where if you try to gain access to it you get a $5,000 fine or three years incarceration,” Harman told The Advocate.

A spokesperson for TasPorts confirmed that attempting to storm the woodchips would result in a maximum penalty of $5,000 under Commonwealth law.

A clever jokester by the name of “They Can’t Stop Us All. Or Can They?” has a cheeky Facebook event planned for the same day as “Storm Area 51.” They are inviting their followers to storm the Federal Reserve Bank of New York, with the reasoning that the government will be at Area 51 that day. A pragmatic idea, but as of now, there’s only interest from 38 people.

A Facebook group has also emerged on Facebook that urges its followers to “Storm the Bermuda Triangle, It Can’t Swallow All Of Us.” As of Wednesday, the group has over 8,000 members and lists that its purpose is to “come up with a strategy to clap sea monster cheeks and find lost pilots and the hidden islands in the mysterious triangle,” while noting wryly that members should “please post freely and remember this is ‘serious’.” 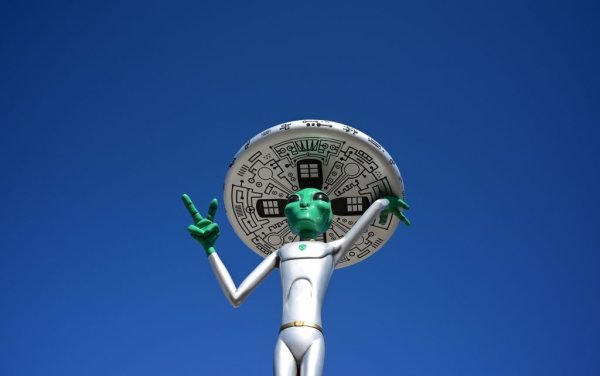 How the Area 51 Raid Meme Became the Galaxy's Biggest Joke
Next Up: Editor's Pick