FaceApp Is Getting People to Age Overnight. Here's What You Should Know About Its Security Concerns

By Ashley Hoffman and Josiah Bates

Time may come for us all, but it came a lot more quickly over the last few days if our feeds are any indication.

In the spirit of the FaceApp Challenge, people are sharing photos of themselves looking much older than they are, and it’s the handiwork of a phone app that can present an image of what you might look like 20 or more years older. (The developer behind the app is based in St. Petersburg.)

This particular app is nothing new, it’s just newly popular and rising to the top of the mind now––thanks to a few shiny updates since it made headlines in 2017. As for the FaceApp cost, it’s free.

Not only will it morph your face in a photo to look older, you’ll have a menu of options to adjust your mouth to a smile among other things that “add magic to your selfie.” Or, you can look younger if you like, or you can just look at an old picture.

You can find the FaceApp on Google Play and the Apple App store.

The CEO Yaroslav Goncharov explained how the app was built in an interview with TechCrunch.

“They are relatively low level/general use libraries that can be used to build almost anything,” he says, adding: “It took us eight months to release the first version of FaceApp, thanks to our prior background in deep learning and computer vision.”

It’s not without its fair share of controversy, and has even raised concern about privacy given the photo access involved. For context, other photo apps in this vein, like Ever, have been used to train the company’s facial recognition technology in the past.

While the privacy issues surrounding FaceApp have been prevalent, experts say this app isn’t that different than other apps that take data from users.

Craig Shue, an associate professor of computer science at Worcester Polytechnic Institute tells TIME the terms of service for this app appear to be pretty consistent with similar apps that use the cloud and that people have to decide how much of their data they’re willing to share.

“Its all about your tolerance for risk,” Shue says. “There is a trade-off here where people might be using the app because it’s entertaining. That comes with the cost that you’re giving your data to some other company to what they want with it. In this case the user is giving this third party company a very high quality image of themselves that they can then do what they want with.”

Shue acknowledges that because a Russian company created the app, their privacy laws are different than the laws in the U.S. But, Shue says, the app doesn’t appear to operate suspiciously.

“People here generally don’t keep up with the laws in Russia, so they may think that they have more assurances about how their data is being maintained than what they actually do because its’ hosted in a foreign country,” Shue says.

Lorrie Cranor, the director of CyLab, Carnegie Mellon University’s security and privacy institute, says people who have concerns about FaceApp should also have them with other apps that take users’ data.

“You’re giving a blank check to the company. A lot of people think that a privacy policy gives them protection but it usually doesn’t,” Cranor tells TIME. “Anytime you provide your image you never know what is going to happen with it.

That hasn’t stopped celebrities like Drake, the Jonas Brothers and Tim Tebow from getting in on the Face App challenge.

The kids on the internet may be growing up. See below for some of the most popular contributions online to the trend.

And non-celebrities are in on the face app challenge too. 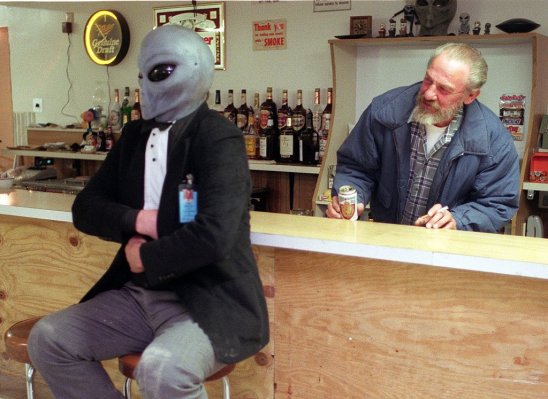 The Military Responded to Those Planning To Raid Area 51
Next Up: Editor's Pick