More than a hundred people have died and millions were forced to leave their homes as monsoon rains have devastated parts of India, Nepal and Bangladesh.

“Many people have taken shelter on the highways, that will be the state for the next two to three weeks until the water recedes,” Mohamad Farukh, CEO of the disaster relief NGO Rapid Response told TIME about the situation in Assam State. “Bihar has better housing infrastructure, they will continue to stay in their houses or schools will operate as temporary relief shelters.”

He says that he expects the situation to “deteriorate over the next two to three days” in India as water flows to the region from Nepal and Bhutan.

The BBC reports that the Brahmaputra River, which flows down from the Himalayas into Bangladesh, overflowed its banks on Monday and flooded 1,800 villages in Assam state. Flooding has also hit southern Nepal, where police said 67 people have died and 30 people are missing, according to the BBC.

Dibya Poudel, Communications Director of Nepal Red Cross, told TIME he believes at least 300,000 people are affected, but initial damage assessments are still being done. People are “residing in temples and schools” he said. He noted that landslides are also a problem.

Storms have also killed at least 29 people in Bangladesh in the last week, including 18 hit by lightning, reports the BBC. Cox’s Bazar, a lowland coastal district where about a million Rohingya refugees from Myanmar have been stuck after fleeing violence, has not been spared. It is the “most severe weather since the massive Rohingya refugee influx of 2017,” according to a statement on the International Organization for Migration’s website. Landslides, floods and wind have damaged hundreds of structures and directly impacted 5% of Cox’s Bazars residents, it says.

Read More: Myanmar Struggles to Cope in the Aftermath of Catastrophic Floods

“Monsoons and landslides are making the Rohingya refugees’ difficult situation even more precarious,” Bill Frelick, refugee rights director at Human Rights Watch, said in a statement on their website.

“We are getting ready for the situation to get worse in the next two or three days,” Md. Feroz Salah Uddin, spokesperson for the Bangladesh Red Crescent Society, told TIME.

The annual monsoon season brings heavy rains to the region every year from June to September. At least 1,200 people died in South Asia over the summer of 2017 due to severe flooding. 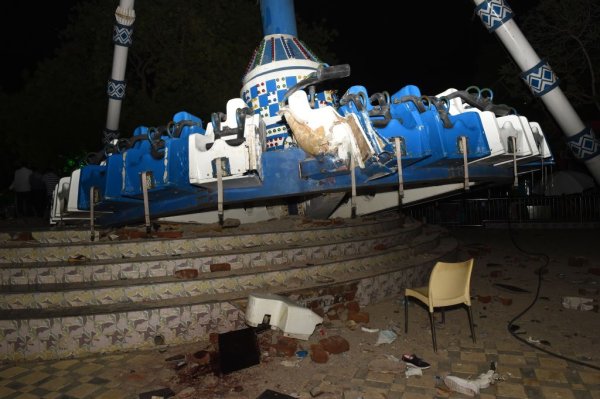 Video Captures Failure of Amusement Park Ride in India
Next Up: Editor's Pick