Two sex assault cases have prompted demonstrations in Spain about the treatment of rape in the country’s judicial system. In the town of Manresa, in north-west of Barcelona, last week four men between the ages of 18 and 25 were arrested in connection with the suspected rape of a 17 year-old girl. It came just two weeks after six men accused of gang raping a 14-year old in the same town in 2016 went on trial in Barcelona.

These cases have reignited a debate and review of the nation’s laws on sexual violence which activists have said are antiquated and misogynistic. They follow the notorious “Wolf Pack” case that first sparked public outrage in 2017, where five men were eventually found guilty of raping an 18 year-old woman during the 2016 Running of the Bulls festival in Pamplona.

In Spain, the legal distinction between sexual abuse and rape comes down to wether an attack was violent or included intimidation. This is problematic because it often requires the victim to fight back in order to be recognized as rape. “If you resist they kill you, if you don’t resist you consent. What to do?” read one sign at a protest. Though some lawyers have been campaigning to change the law for decades, it didn’t became a national debate until the #MeToo movement took off.

The “Wolf Pack” case was at the centre of feminist protests in the past few years, and the six men on trial in Barcelona are now being called the “La Manada de Manresa”, or “the Wolf Pack of Manresa”. They are accused of taking turns to assault the teenager while she was drunk, and since she did not fight back, prosecutors have argued they should face the lesser charge of sexual abuse instead of rape. This sparked protests against what many see as “patriarchal justice”. On the first day of the trial, July 2, the six men walked out of the courthouse covering their faces from a crowd of demonstrators chanting “it’s not abuse, it’s rape” – words that have echoed across the country and have come to define Spain’s #MeToo movement.

The original court decision of the “Wolf Pack” case in 2017 triggered huge feminist protests all over the country when judges found the men guilty of sexual abuse but not of rape. However, three years later, on June 21, campaigners celebrated a huge victory when the Supreme Court overturned the ruling. ‘Victims should not be required to show “heroic behavior” to show lack of consent,’ the Supreme court judges declared after they recognized the attack as rape and increased the attackers’ sentences from nine years to 15. The move was seen as decisive victory by women’s rights campaigners.

According to the UN, 154 countries worldwide have laws on sexual harassment. But even when laws exist, they are not always compliant with international standards. According to the Spanish online newspaper eldiario.es, the UN’s Working Group on Discrimination against Women in Law has recently called on Spain to explain measures it is taking to fight against discrimination in its justice system. In a letter sent on June 20 it expressed “concern” that cases like the Wolf Pack case “show that the legislation is interpreted by discriminatory justice system based on prejudices and gender stereotypes”. The Ministry of Foreign Affairs has until August 19 to respond.

When Pedro Sanchez’s socialist government came into power in June 2018, a reform of the criminal code was proposed almost immediately to adopt the “only yes means yes” rule. It came after feminist lawyers in Spain had been campaigning for years for the treatment of sexual crimes to be aligned with the Convention of Istanbul, a treaty signed by most European countries that requires rape to be based on lack of consent rather than evidence. Still, only 10 countries in Europe (Iceland, UK, Ireland, Sweden, Germany, Belgium, Luxembourg, Portugal, Greece and Cyprus) define rape as “sex without consent”.

Despite the current government’s willingness to improve women’s rights, the political climate has perhaps never been more complicated. The rise of the far-right party Vox, which won 10.3% of the vote in the last election, threatens to undo the work feminists have been doing for decades. The party is openly misogynistic, and has campaigned to scrap tough laws against gender violence which it argues “criminalizes” men.

When it comes to sexist culture, a survey carried out in five EU countries and the U.S. in November 2018 rated Spain as the worst country for street harassment against women, but for physical assault and rape, the statistics were similar or lower than those in other countries. According to the Geoviolencia sexual project, there has been a stark rise in group sex attacks in Spain, with more than 100 recorded since 2016. There were 14 sexual assaults carried out by multiple attackers in 2017. This rose to 59 in 2018, and there have already been 34 this year.

But to understand the context of these laws we have to go back to the 40-year long dictatorship under Francisco Franco, which ended with his death in 1975. Women’s rights were severely restricted under a legal system where, for example, only women could commit adultery. The transition to democracy was a period of profound change where feminism played a big role. “Spain has had a very strong feminist movement since 1975, when it was confronted with a grotesquely misogynistic country,” says Nuria Varela, author of Feminism for Beginners, who was involved in the creation of the country’s first Ministry of Equality in 2008. “Not only did we have to change the culture, but we also had to dismantle the legal framework of a fundamentally misogynistic dictatorship.This is why Spanish feminism is so political, because Spanish women are very aware of their legal rights.”

The Wolf Pack case also came after a conservative government in 2011 attempted to curtail women’s abortion rights. “It was the idea that we were going back to the old Francoist Spain that it took us so long to get out of,” says Varela. “I think that was the pivotal moment where feminism in Spain really woke up.”

In July 2016, during the Running of the Bulls festival, an 18-year old woman was led into a building lobby by five men, who took turns having sex with her and recording it on their mobile phones. The perpetrators came to be known as the Wolf Pack after the name of the WhatsApp group they used to boast about their sexual exploits. “The trial became emblematic because it symbolised a clash between two different models,” says criminal defense lawyer Laia Serra. “On the one hand an obsolete judicial model that is guided by gender stereotypes, minimizes sexist violence and does not give credibility to women. And on the other hand a judicial model that is committed to women’s rights, attaches importance to violence, and defines sexual offenses according to whether or not the woman gives consent.”

In April 2018, regional court judges found the perpetrators guilty of ‘sexual abuse’, stating it could not be considered rape because there had been no violence or intimidation. The sentence, which came just a few months after the hashtag #MeToo began to spread virally on social media, immediately sparked nationwide protests, with women gathering on the streets of several cities on the same day.

While changing the criminal code would be useful, some argue it is only part of the solution. “The appropriate judicial response depends, above all, on a paradigm shift: the strengthening of a respectful legal culture towards women that understands that violence is a symptom of a patriarchal society,” says Serra. This is evident in the prosecutor’s position in the Manresa Wolf Pack case.

The emergence of Vox as an increasingly loud opposition to the feminist movement has somewhat diluted the Supreme Court’s recognition of rape in the Wolf Pack case. “On the one hand there’s increasing awareness, social mobilization and a rejection of violence. But on the other there is this old sexist discourse that we thought had been banished,” says Varela. “This is the debate we currently find ourselves in, and the “wolf pack case” is part of it. It’s a fundamental debate not just for women but for democracy.” 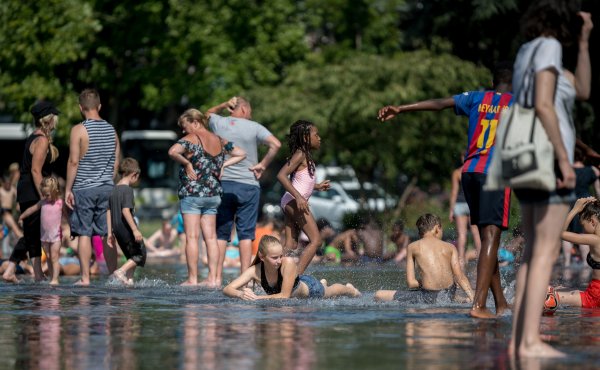 Paris Could Hit 108 Degrees Thursday
Next Up: Editor's Pick