Pamplona's Bull Runs Have a Controversial Past. Do They Still Have a Future?

Participants run next to Miura fighting bulls on the last bullrun of the San Fermin festival in Pamplona, northern Spain, on July 12, 2019.
Jaime Reina – AFP/Getty Images
By Ciara Nugent

It takes about three and a half minutes to complete what’s perhaps the world’s most controversial race.

Each year in the second week of July, six bulls are released every day at 8 a.m. into the narrow streets of Pamplona, a city in Spain’s northern region of Navarre. Several hundred people set off after them, scrambling chaotically for half a mile as crowds watch from balconies and street corners – and millions more on television. The bravest — or the stupidest — try to get out in front for the thrill of grabbing a bull by its horns. (Though this is explicitly forbidden and carries a heavy fine.) The track ends at the city’s bullring, where bullfighters face off with the animals and later slaughter them.

The festival has been condemned, by Spaniards and foreigners alike, for its cruelty to animals, its atmosphere of toxic masculinity, and seemingly pointless risk to the participants. Such criticisms were renewed after eight runners, including two Americans, were non-fatally gored by bulls during this year’s eight races ending July 14. One was wounded in the neck and “miraculously” avoided damage to major arteries.

But supporters say the running of the bulls is a centuries-old tradition and vital to regional culture. Here’s the history of Pamplona’s bull run – and a look at its contested future.

How did the bull run start?

Bull runs evolved from medieval farmers herding their animals through town to show them off at the bullring. It’s unclear exactly when revelers got involved, but the runs in Pamplona became a cultural touchstone some time after 1591, when townspeople moved the annual celebration of their patron saint, San Fermin, from the fall to summer—taking advantage of the weather and coinciding with a big trade fair.

Today, the week-long festival swells the town’s 200,000 population five-fold and powers its economy, with visitors spending an average of $110 per day.

What do critics of Pamplona’s running of the bulls say?

The festival is not universally loved. Animal rights groups have been a fixture for decades; this year, PETA and local activists lay outside the townhall, semi-naked on top of chalk outlines of fallen bulls to protest the “cruel spectacle”.

Women have also called out the uncomfortably macho atmosphere at the runs, and many have complained of sexual harassment. (Women were not allowed to compete at the runs until 1974). The gang rape of an 18 year-old at the 2016 festival, known as the “Wolf pack” case, became a national scandal and cast a shadow over recent festivals. Authorities say they have stepped up police presence and increased the number of surveillance cameras to monitor the crowd.

The runs are also undeniably dangerous. Sixteen people have died since 1910, most recently in 2009. 35 people ended up in hospital this year after being gored, trampled or falling.

Why do people take part in such a dangerous event?

Runners say the danger is the point. On July 11 a group of runners sat down before running to protest authorities’ use of anti-slip chemicals and highly trained steers to shepherd the bulls. Such measures improve safety, but undermine the event’s “emotion,” one runner wrote in a social media post. “We have something unique here. Let’s defend it.”

Will the bull run keep happening?

The runs themselves seem safe for now. Pamplona’s mayor has said he “can’t imagine” the festival without bulls, and, though he is open to phasing out bullfights, these are protected under the Spanish Constitution as part of cultural heritage. Courts, including the Supreme Court, have overturned attempts to ban lethal ones in the regions of Catalonia and the Balearic Islands.

But the debates are unlikely to go anywhere. Hemingway recognized Pamplona’s pull as problematic back in 1925. “If a male looks at it for a moral standpoint there isn’t any excuses,” he wrote about bullfights in a letter to a friend. “But if a male takes it as it comes. Gawk what a hell of a wonderful show.” 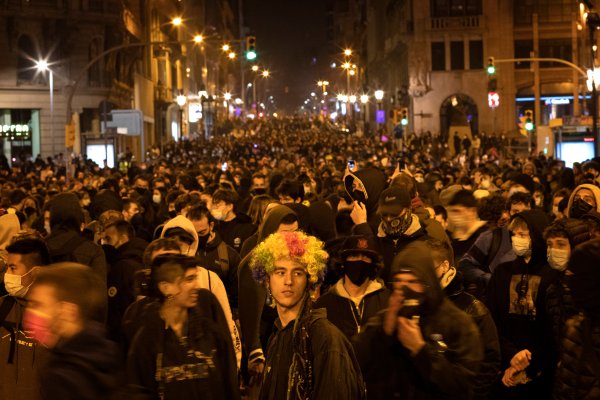 Spanish Youths Protest in Support of Rapper Pablo Hasel
Next Up: Editor's Pick