Foxconn Founder Terry Gou Wants to be Taiwan’s President—and a Go-Between for U.S. and China

“People still talk about the G-20, but today there’s really only the G-2,” says Terry Gou, Foxconn CEO, on the U.S. and China.
Cedric Arnold for TIME
By Charlie Campbell/Tianan, Taiwan

If you want to know how focused Terry Gou is on the campaign trail, look at his pants. When the billionaire Foxconn CEO gives televised interviews, senior aides crouch by his feet, just off camera. If he strays off message, they’re primed to steer the presidential contender back on course by giving his pant legs a quick tug.

Gou’s cuffs remained unruffled as he spoke to local news stations on June 15 at Kun Shan University in the southern Taiwan city of Tainan before greeting students with running high fives like a WWE wrestler. His platform in the 2020 presidential election in the island territory, he says, is how to profit from a trade war. As the U.S. and China have ramped up tit-for-tat tariffs on a range of imports over the past year, Taiwan is in a prime position to exploit the conflict, Gou tells TIME. “The trade war is also a technology war,” he says. “Taiwan can become the supply-chain in between.”

Although the two sides recently brokered a temporary trade cease-fire, the U.S. and China are locked into divergent paths long term. Gou, 68, sees it ending with two rival tech zones: China servicing developing nations in Asia, Africa and Latin America on one side, and the U.S., Europe and allies on the other. “People still talk about the G-20,” he says, “but today there’s really only the G-2.” That represents an opportunity for Taiwan, which has historic links with both of these superpowers, to be a “gatekeeper,” he says.

It’s a theory he’s hoping to put into practice as leader of this island of 23 million people, which has ruled itself since effectively splitting from the mainland following China’s civil war in 1949. In June, Gou stepped down as chairman of the company he founded over 40 years ago to dedicate himself full time to the race for leader of the opposition Kuomintang party, from which he could challenge incumbent President Tsai Ing-wen next year. Gou says deteriorating cross-strait relations are what pushed him into the political fray. “Today’s President doesn’t have communication channels with Beijing,” says Gou. “This is a very bad situation.” But is Taiwan’s wealthiest man the right person to fix it?

Gou’s parents fled mainland China in 1949, as the communist revolution came to fruition. He was born a year later on the outskirts of Taipei, where his family lived in a single room for the next 11 years. “We would eat dinner, clear away the table and sleep in the same spot,” he recalls. They relied on handouts from U.S. missionaries, he says. “I would go to church, sing some hymns, and they would give us a carton of milk and bag of flour with the Stars and Stripes on it.”

After a stint in naval college, Gou became a shipping clerk. In 1974, at 23, he started Foxconn, thanks to a $7,500 loan from his mother, which he used to buy plastic molding machines to make knobs for Western televisions. In the early ’80s, Gou embarked on an 11-month tour of the U.S., making unsolicited sales calls to drum up more business from firms like IBM. “I learned a lot from the American system,” he says. “It’s so open–if you work smart and hard, you will be successful.”

Foxconn Technology Group is now the world’s biggest electronics manufacturer, and its founder is reportedly worth $6.8 billion. Most of its factories are on the mainland, and its impact on the average American’s life is immense–while Steve Jobs may have invented the iPhone, it was Gou who figured out how to actually make one. The $41 billion company now produces many of the gadgets found in American homes, from Sony PlayStations to Amazon Kindles, Nintendo Wiis and Dell laptops. Success did not come without controversy. Foxconn’s factories became synonymous for excessive overtime, low wages, child labor and unsafe conditions that, in turn, contributed to riots, strikes, workplace fatalities and more than a dozen suicides, critics say. (The company says labor conditions have since improved.)

At its peak, Foxconn was China’s biggest private employer, with a staff of some 1.2 million. But manufacturing has shifted overseas as Taiwan’s economy has grown and overheads became more costly, echoing trends seen in more developed economies worldwide. The shifting fortunes of his company have inspired him to rethink how a new form of globalism might work. He sketches the plan on a crisp sheet of paper.

In exchange for a free trade agreement between the U.S. and Taiwan, he says he would bring 10,000 Taiwanese firms to invest in the U.S. Midwest. High-level components like semiconductors from Taiwan would be sent to U.S.-Taiwan joint ventures for added-value design, branding, engineering and final manufacturing, with low-cost components and labor-intensive assembly provided by nearby Mexico. “We want to be a very good partner for the United States, providing jobs for local people,” he says. However, Foxconn’s previous experience in this field should ring alarm bells; in 2017, Gou pledged to build a manufacturing plant in Wisconsin in return for $4 billion in state and local tax incentives, which Trump hailed as “one of the great deals ever.” But the plant has so far failed to create the jobs originally touted.

It’s also not clear how Gou as President could pull off a deal with China. President Xi Jinping has repeatedly threatened Taiwan with invasion in response to Tsai’s China-skeptic policies. Gou believes his personal relationship with Xi can lower the temperature. He’s met the strongman “several times” over the years, he says, proudly showing TIME notes from a conversation in 2014 at which he says they discussed “democracy.” Many of China’s top political cadres rose through the ranks from provinces where Gou has done business. “So we have relationships, they trust me. That’s very important,” he says.

But closeness to China may also be a vulnerability for Gou in a territory where war with the Communist Party never officially ended. The controversial extradition bill that provoked unrest in semiautonomous Hong Kong has been perceived by many Taiwanese as a warning against getting too close to the mainland, boosting Tsai in the polls. Gou has an uphill battle to convince voters that Taiwan can maintain its de facto independence while forging closer links with Beijing. Critics say Gou’s undeniable record as a businessman does not equip him to stave off a Communist Party that many in Taiwan consider an existential threat. “Gou knows how to run Foxconn and make lots of money,” says Professor Steve Tsang, director of the SOAS China Institute at the University of London. “I don’t think he understands politics.”

Gou does at least understand retail politics, on the evidence of a few days on the campaign trail. Ahead of the July primaries, he has traded board meetings for events and photo ops at universities, retirement homes and stalls hawking fish-head soup. At every stop, hundreds of fans snake around the block for a selfie. In superstitious East Asia, a mere touch from Taiwan’s richest man can bestow business success. Scarfing down his lunch at a Tainan community center, Gou passes a juicy chicken leg to a wide-eyed youngster. “You’re so lucky,” comes a voice tinged with envy from the crowd. “Now you’ll be as successful as him.” 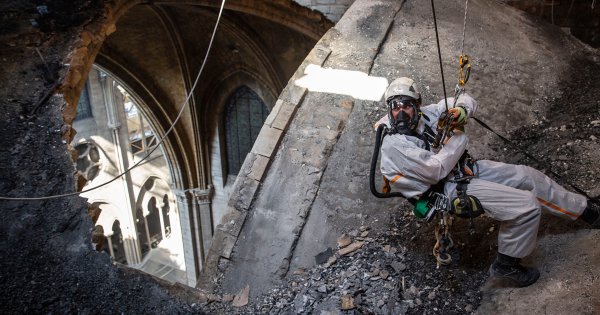 An Exclusive Look Inside the Recovery Efforts to Save Notre Dame
Next Up: Editor's Pick