'You Need to Do Better for Everyone,' Megan Rapinoe Tells President Trump

Soccer star Megan Rapinoe urged President Donald Trump “to do better for everyone,” criticizing his Make America Great Again message for “excluding people,” as she spoke out in an interview days after her team’s record-breaking victory in the 2019 Women’s World Cup.

“I think that we have a responsibility, each and every one of us. You have an incredible responsibility as, you know, the chief of this country, to take care of every single person, and you need to do better for everyone,” she added.

Rapinoe, the team’s co-captain, scored six goals during this year’s tournament as she helped lead the team to its second consecutive World Cup title. She drew an international spotlight for her athletic performance on the field and her candid comments on political and social issues off of it, calling out Trump for his policies and FIFA for insufficient investment in women’s soccer. She has also participated in protests against social injustice during the national anthem in solidarity with Colin Kaepernick, sparking some backlash.

Rapinoe told MSNBC’s Rachel Maddow on Tuesday that she wants to “leverage this moment” to work on fighting for social issues beyond soccer. “I take very seriously the platform that we have and understanding where my voice goes when I say things,” she told Maddow. “I feel a responsibility to do this. I’m privileged to be a famous person and to be on this team and to be who I am, and if I just stay silent, it seems awfully selfish.”

Members of the U.S. Women’s National Team filed a federal gender-discrimination lawsuit against the United States Soccer Federation in March, fighting for equal pay after alleging they are paid a fraction of what male soccer players make, despite their superior performance.

Trump criticized Rapinoe in a series of tweets last month after a video surfaced in which she said she would not go to the White House after the World Cup. Rapinoe apologized for cursing in the video, but said she stands by her comments and has no intention of visiting 1600 Pennsylvania Avenue.

“I don’t think anyone on the team has any interest in lending the platform that we’ve worked so hard to build, and the things that we fight for, and the way that we live our life,” Rapinoe told CNN on Tuesday. “I don’t think that we want that to be co-opted or corrupted by this administration.”

She said she and other teammates — who received invitations to visit Congress from House Speaker Nancy Pelosi, Senate Minority Leader Chuck Schumer and New York Rep. Alexandria Ocasio-Cortez — are still interested in going to Washington, D.C. in another capacity.

“Yes to AOC, yes to Nancy Pelosi, yes to the bipartisan Congress, yes to Chuck Schumer,” Rapinoe said. “Yes to anyone else that wants to invite us and have a real substantive conversation, and that believe in the same things that we believe in.”

The U.S. Women’s National Team will be celebrated with a ticker-tape parade through New York City’s Canyon of Heroes on Wednesday morning. 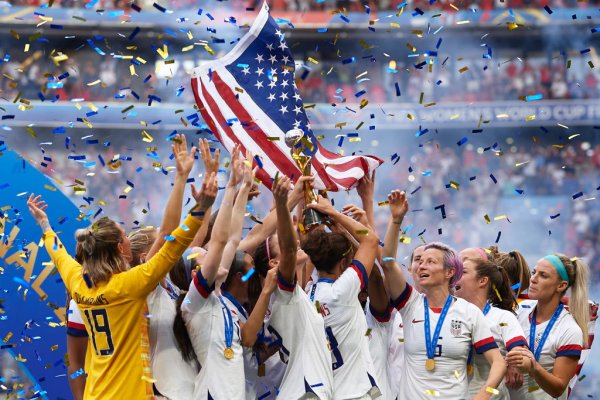 Here's Where to See the U.S. Women's Soccer Team Stars Play Now That the World Cup Is Over
Next Up: Editor's Pick