The stunning visual of an Antarctic ice shelf the size of Delaware breaking off into the ocean has struck wonder and worry in those all across the world who have the seen image. Scientists mostly attribute the occurrence to cleaving, the process in which a large portion of ice separates from the larger shelf, but disagree about the extent to which climate change contributed

Scientists say Larsen C will not directly contribute much to devastating sea-level rise — the ice shelf was already floating, so when it melts, waters will not rise significantly — but nonetheless the image of a trillion-ton iceberg floating away from Antarctica has raised new concerns over climate change. And rightfully so. If the entire Antarctic ice sheet melted, sea levels would rise by 200 feet globally, according to National Snow and Ice Data Center data.

That scenario almost certainly will not happen in the lifetime of anyone living today, but scientists warn that some parts of Antarctica’s ice sheet are relatively close to collapse. One of the most vulnerable areas may be the Thwaites Glacier in the western part of the continent. A 2014 study published in the journal Science suggests that the glacier is likely in the early stages of collapse, with the glacier losing a fraction of a millimeter of ice annually. The researchers found that the glacier will likely begin rapid collapse as soon as 200 years from now, though potentially as long as 900 years from now.

But many variables remain undetermined and some scientists have warned that ice melt in West Antartica could actually occur much faster than previously anticipated if humans continue to emit greenhouse gases at current rates. A controversial study released last year from famed climate scientist James Hansen and a team of others suggested the world could see several feet of sea level rise by the end of the century, in large part due to ice melt in West Antarctica.

Larsen C looks large today — and it is. But the worst-case scenario ice loss of the next century that could come from climate change would dwarf the ice shelf. 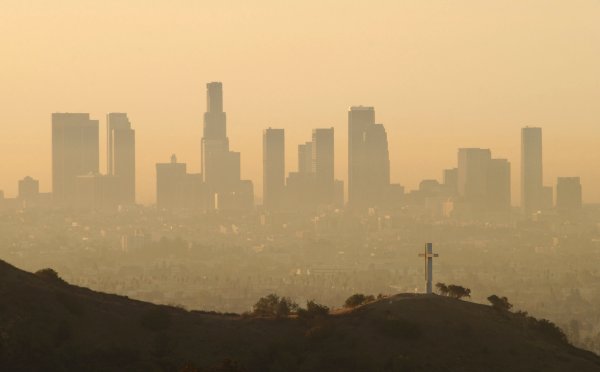 Air Pollution in the U.S. Still Contributes to Early Death Despite Decades of Effort to Stop It
Next Up: Editor's Pick