A mourner holds a flower and a incense stick to be placed at the site where a protester died in Hong Kong.
ANTHONY WALLACE—AFP/Getty Images
By TIME Staff

A 28-year-old Hong Kong protester was found dead Wednesday near her home, local media reports. The woman, who has been identified only by the surname Mak, is being hailed locally as the fourth “martyr” in a massive protest movement that has seized the semi-autonomous Chinese enclave for the past two months over a controversial extradition bill.

The woman’s family and friends said they decided to make her death public because they believe she would have wanted her message conveyed, local site Stand News reports.

Friends described being shocked by the woman’s death. “A lot of people would say she is a ‘happy nut,'” one unnamed friend told Stand. They also said she had been preoccupied by the protests against the now-suspended extradition legislation. The movement has morphed into a fight to preserve the freedoms that make Hong Kong China’s freest city, as well as push for greater democracy.

Protest paraphernalia, including googles and saline solution to combat teargas, were found on the woman’s bed, her friends and family said.

They added that they believe she clearly intended to signal to the government the protesters’ desperation for a meaningful democratic vote.

“It’s the responsibility of the government to give hope to young people,” a friend reportedly said.

The woman’s death is the fourth to have included a suicide note or other reference mentioning the ongoing political crisis. Last month, in the first of the instances, a 35-year-old man fell to his death from a luxury mall located near the epicenter of the protests while unfurling a banner denouncing the extradition bill. Fellow protesters and mourners erected a shrine in his honor, laying wreaths and origami flowers near the site of his death.

Suicide prevention groups told local media that they have recently been inundated with calls for help related to the protests, and warned of a mental health crisis. Most of the calls have come from very young Hongkongers.

On the apps that protesters use to organize and communicate, many posters have shared messages of emotional support and circulated the numbers of helplines.

On Tuesday, the day after desperate young protesters stormed the local legislature, lawmaker Claudia Mo called on the activists to stay positive and “drop the martyr mentality.”

“I’m sure that you would have seen messages online that some are quite willing, they say, to die for this democracy fight. But we need to remind them it’s not worth it. Time is always on young people’s side,” she said at a press conference. 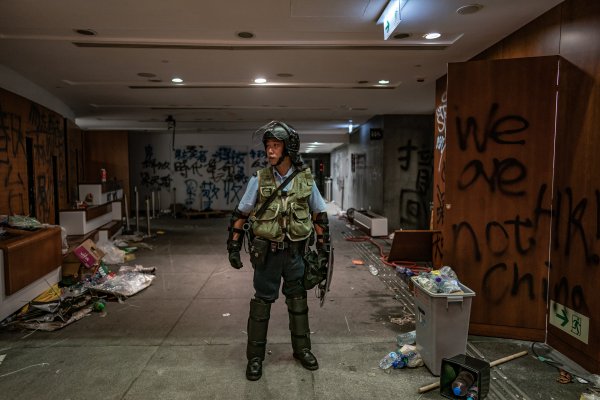 Arrests Begin in Hong Kong as China Intensifies Rhetoric
Next Up: Editor's Pick