“Wah, wah, wah,” said Megan Rapinoe when asked to respond to criticism of her teammate Alex Morgan’s tea sipping celebration. “I mean, it’s like, we’re at the World Cup, what do you want us to do? This is the biggest stage, the biggest moment.”

Morgan, the co-captain of the USA women’s team, celebrated her game-winning goal against England on July 2, her birthday, by exaggerating a sip of tea—pinky up and head tilted back. The act went viral, and many cheered her on, but Morgan was also criticized by some calling the move arrogant, and an example of bad sportsmanship. Some even criticized her tea-sipping form.

Morgan responded to the criticism, saying the gesture was more a play on “spilling the tea” than a jab at her English opponents. She said there’s a double-standard for women players.

“You see men celebrating all over the world in big tournaments, grabbing their sacks or whatever it is,” Morgan told reporters on Friday. “When I look at sipping a cup of tea I’m a little taken aback and kind of—you have to laugh about it to see all the criticism.”

Rapinoe, who’s faced her own share of criticism for her vocal opposition to President Donald Trump, defended her teammate and said Team USA respects all other teams.

“I don’t think anyone truly believes that we disrespect the game or disrespect our opponents,” she told reporters on Wednesday. “We have the utmost respect for England and every team that we faced and every team that we will face forever and ever, that’s just part of the DNA of the squad. With that said, we work hard, we like to play hard and we like to have fun and enjoy ourselves.”

“There is some sort of double-standard for females in sports to feel like we, you know, have to be humble in our successes and have to celebrate but not too much, do something but it always has to be in a limited fashion,” Morgan said. 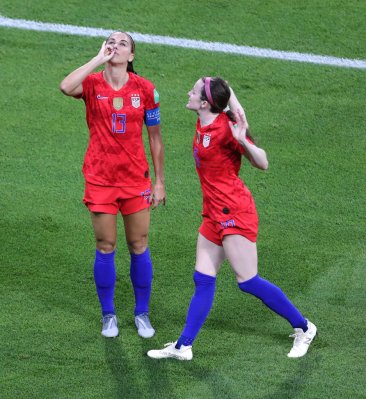