Even when beating opponents by double digits, the U.S women’s national soccer team has celebrated goals. Such arrogance, critics shout. (TV analysts from Canada called the exuberance “disrespectful” and a “disgrace.”) Several players, including high-profile stars Megan Rapinoe and Alex Morgan, have said they’d refuse to visit the White House after the World Cup, given their opposition to President Donald Trump’s behavior and policies. Rapinoe, who also refuses to sing the National Anthem, even added an expletive to her explanation. (Such disrespect. Some Americans have sworn off watching the team, given that players have dared to infuse politics into their conversations, and actions. The team, however, continues to set ratings records.)

Before its World Cup semifinal against the U.S., England coach Phil Neville objected to U.S. staff scouting out England’s hotel in Lyon, even though the Americans would have to stay there if they advanced to the final. Neville said such reconnaissance is “…not something we’d do, send somebody round to another team’s hotel, er but, it’s their problem.” (Since when is advanced planning a problem?) The scouting was ultimately necessary; as the Americans beat England 2-1 to reach their third consecutive World Cup final. The match is at 11 a.m. EDT on Sunday against the Netherlands. During the semi-final, Alex Morgan ticked off many England fans by pantomiming a sip of tea after scoring the game’s go-ahead, and ultimately deciding, goal. One former England player said she wished she were on the pitch, so she could tackle Morgan.

“Wah, wah, wah,” Rapinoe responded. “I mean, it’s like, we’re at the World Cup, what do you want us to do? This is the biggest stage, the biggest moment. I don’t think anyone truly believes that we disrespect the game or disrespect our opponents. We have the utmost respect for England and every team that we face … We work hard, we like to play hard and have fun and enjoy ourselves, and these are the absolute biggest moments for that.”

The U.S. women, indeed, work hard, play hard and have an indefatigable belief in themselves. Before the World Cup, the players decided to sue their employer, U.S. Soccer, for gender discrimination, alleging that the the organization doesn’t pay them their worth and offers only “lip service” to equality. (U.S. Soccer has denied such claims: the case is headed to mediation). The team knew that a victory––the team won the last World Cup in 2015, and is ranked number one in the world––would give their cause momentum. They bet on themselves. They made the decision to add inescapable pressure to their World Cup quest.

And with a win over the Netherlands on Sunday, they’ll prove that they did it the right way.

Sue your employer before the biggest tournament of your lives? Sure. Revel is scoring goals, inviting anger from naysayers around the world? Just do it. Preemptively announce your refusal to visit the White House, adding a “distraction” and turning a significant segment of the American public against you? It all doesn’t matter. With a win Sunday, talent prevails.

Team Netherlands should challenge the Americans. For one, the Dutch can play defense. The Netherlands conceded just two goals in the group phase, and one in the knockout stage. The Oranje haven’t given up a goal in their last two games, a 2-0 quarterfinal victory against Italy, and a 1-0 semifinal victory over Sweden. The Netherlands squad features a dangerous 1-2 punch in striker Vivianne Miedema, who set a new Women’s Super League scoring record by netting 29 goals for Arsenal this season, and Lieke Martens, the 2017 FIFA Player of the Year.

The Americans have defeated Holland in six straight games, by a score of 22-2, but those blowouts are ancient history; the teams haven’t faced each other since 2016, and the Dutch took the 2017 European Championship. The U.S. has scored a goals before the 13th minute in every game of this World Cup; if the Netherlands can somehow play keep-away early and force the Americans to be patient, how will Team USA react in the finals?

Team USA will also face a more hostile crowd in its final game. A rabid traveling fan base has supported the Americans in France throughout the tournament, but Dutch fans are just as passionate (and a lot closer to Lyon). Holland’s orange-clad supporters love their sports: they even get behind mundane affairs like long-track speed skating. A chance at a first ever women’s World Cup will fire up Oranje fans.

Still, the Americans have the deeper, more talented soccer team. Quite simply, they’re better than the Netherlands, and should clinch back-to-back World Cup titles on Sunday. If that result holds, the players will surely pass on the tea. They’ll be chugging hard-earned champagne. 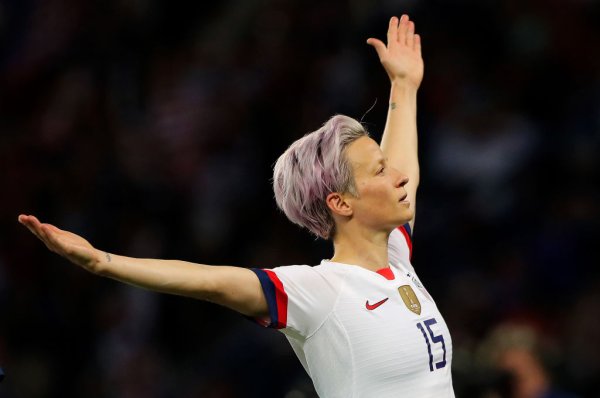 Megan Rapinoe Is Fearless in the Face of France—and Trump
Next Up: Editor's Pick