'I Love Things That Are Absurd.' Meet the Man Who Turned Nathan's Hot Dog-Eating Contest Into a National Obsession

Every year, the Nathan’s Famous 4th of July International Hot Dog-Eating Contest draws nearly 25,000 people to Coney Island, N.Y., while over a million viewers tune in to ESPN’s live coverage, all to watch 20 competitors eat as many hot dogs as they can in 10 minutes.

Besides the competitors, there’s another draw: George Shea—the event’s host, or Master of Ceremonies—who delivers a series of verbose, outlandish and occasionally inspired introductions of the competitors. At the 2014 Nathan’s contest, he introduced one of the competitors saying: “His mother held him close and whispered in his ear. She said you are of mine flesh but you are not mine own. Fate is your father and you belong to the people.”

Eating competitions weren’t always what they are today. Shea, also the co-founder of competitive eating’s Major League Eating (formerly known as the International Federation of Competitive Eating), took over the Coney Island event in 1991 as a press agent a few years out of college. Hot dog eating as a “competition” reportedly dates back to the early nineteen-hundreds, and when Shea took over the Nathan’s contest, it was a small affair—a couple dozen spectators, one or two television cameras, and a group of enthusiastic amateur eaters.

It was Shea who began heavily promoting the event and delivering elaborate, irony-tinged introductions. (He once said of 10-time Nathan’s champion Joey Chestnut: “through the curtain of the aurora, a comet blazes to herald his arrival.”) Shea also began billing the eaters as “athletes.” In radio interviews throughout the 1990s, he explained that the dozen or so entrants were the fiercest competitors culled from a nationwide circuit of qualifying events.

“There was no business plan,” Shea explains. “You know what was in my mind? I thought it was funny and absurd, and I love things that are absurd. So we always treated it as a sport, called it a sport, called them athletes.”

The Nathan’s contest is now the largest and best-known competitive eating event in America, but it is far from the only one. From the Acme Oyster Eating Championship in New Orleans to the Pork Roll Eating Championship in Trenton, N.J., there are dozens of similar events all under the auspices of Shea and his partners’ Major League Eating. To prepare, professional and semi-professional eaters train year-round: practicing swallowing techniques; increasing their stomach capacity by alternately fasting and binging on vegetables, milk or protein powder; and working out to limit excessive body fat, which can curb stomach expansion.

“He convinces the audience these guys are athletes,” said Joey Chestnut of Shea in the 2017 documentary, Chasing the Mustard Belt. “He does such a good job, he convinces me I’m an athlete.”

The league was built in large part by Shea’s new pageantry. In 1997, he and his brother founded the International Federation of Competitive Eating to manage their multiplying events, each sponsored by a different corporate client. And in 2001, a first-time competitor from Japan named Takeru Kobayashi ate an astounding 50 hot dogs in 10 minutes, doubling the previous record. Other contestants, initially bewildered by Kobayashi’s technique—he practiced rigorously and employed a trademark “Kobayashi wiggle” to force food into his stomach—began to train like athletes as well. In 2003, ESPN began broadcasting the event on national television.

And in 2007, Nathan’s Famous got what all sports really need: a rivalry. The formerly unbeatable Kobayashi was bested by Joey Chestnut, who consumed a staggering 66 hot dogs. Shea continued to raise the dramatic stakes, narrating a tale of loss and redemption in interviews and onstage, with Joey Chestnut as the sport’s American hero. “This man stands for all that is eternal in the human experience, the courage to stand for a nation when all others fail or turn away,” Shea said at the Nathan’s contest in 2015.

“It’s a competition for us, but it’s a show for everybody else,” explains Matt Stonie, the 2015 Nathan’s champion. “You need somebody to tell that story.”

That story has always contained a unique balance of earnestness and irony. Shea’s trademark narrations sell the drama of the event while reaching a grandiosity that capitalizes on the contest’s absurdity. “[The audience] both knows that this is somehow a joke and still feels it at the same time,” Shea says. “That razor’s edge, that’s for me the magic.”

In many ways, the growth of competitive eating is similar to that of mainstream American sports. Amateur baseball clubs evolved into multi-million dollar leagues, much like how small eating competitions have turned into nationally broadcast events. Rather than traveling the back roads of turn-of-the-century America, competitive eating made the rounds of strip mall parking lots throughout the United States.

At times, the wild narratives of competitive eating resemble WWE professional wrestling, a scripted pseudo-sport that combines the melodrama of soap operas and the action of boxing. Like wrestling, winners of the Nathan’s competition are awarded “the mustard belt,” and Shea’s theatrical introductions often resemble wrestlers’ long-winded pre-match soliloquies.

By coincidence, Shea’s wife is a writer for WWE and a former soap opera producer. “What soap operas did and what WWE did is exactly what we do but in a different format,” Shea says. The difference, it seems, is that while professional wrestling delivers its narrative with a soap opera’s self-serious camp, competitive eating does so with a winking acknowledgement of the fact that its “heroes” are men and women who compete to cram down astonishing quantities of hot dogs, oysters, sweet corn or pork rolls.

Competitive eating’s mechanisms of audience engagement—the creation of heroes, drama and cultural relevance—are no different than those in other popular sports, except for their lack of straight-faced earnestness. In competitive eating, George Shea created the first true ironic sport, and made a killing along the way.

Asked if he believes that competitive eating will outlast him, Shea stops to reflect. “Do you know how many questions I’ve considered before? I’ve never considered that.” He pauses for a moment, thinking. “Wow,” he says. “I guess it could.” 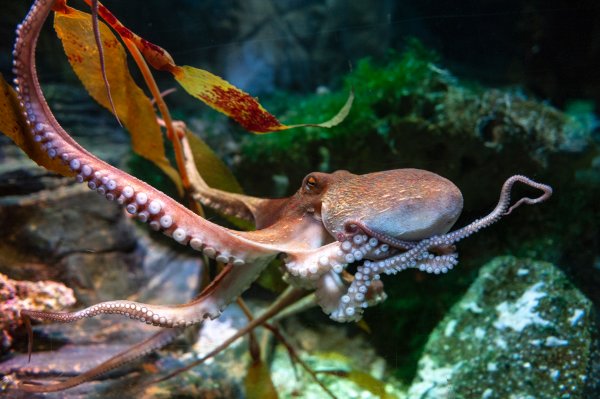 'Psychic' Octopus That Correctly Predicted Japan's World Cup Results Is Killed and Sold for Food
Next Up: Editor's Pick