Questions around Harris’ background seemed prompted by a bruising exchange between her and former Vice President Joe Biden during Thursday’s debates. Harris, whose father is Jamaican and mother is Indian, said she was part of racially integrating her California public school district, and she attacked Biden for his position against public school busing in the ’70s.

During the second night of back-to-back Democratic debates on Thursday, Donald Trump Jr. retweeted a tweet that claimed Harris is “not an American black.”

“Kamala Harris is not an American Black,” wrote conservative personality Ali Alexander on Thursday in a message retweeted by Trump. “She is half Indian and half Jamaican. I’m so sick of people robbing American Blacks (like myself) of our history. It’s disgusting. Now using it for debate time at #DemDebate2? These are my people not her people. Freaking disgusting.”

Harris’s campaign Communications Director, Lily Adams, told CNN on Saturday that the accusations were in the same vein as “birtherist” claims lobbed at President Obama, suggesting that he was not born in America.

“This is the same type of racist attack his father used to attack Barack Obama,” Adams said, quoted by CNN, about Trump Jr. “It didn’t work then and it won’t work now.”

After adamantly defended his civil rights record on Friday, Biden came to Harris’ defense. The former Vice President also linked the accusations to the “birtherism” claims.

“The same forces of hatred rooted in ‘birtherism’ that questioned @BarackObama‘s American citizenship, and even his racial identity, are now being used against Senator @KamalaHarris,” Biden tweeted. “It’s disgusting and we have to call it out when we see it. Racism has no place in America.”

Sen. Cory Booker posted a New York Times article that addressed the controversy, and said that “[Harris] doesn’t have [sh**] to prove.”

“The presidential competitive field is stronger because Kamala Harris has been powerfully voicing her Black American experience,” Buttigieg wrote on Twitter. “Her first-generation story embodies the American dream. It’s long past time to end these racist, birther-style attacks.”

Sen. Elizabeth Warren similarly called out the attack online. She also rebuked tech companies, whom she blamed for allowing the message to propagate on the internet.

“The attacks against @KamalaHarris are racist and ugly,” Warren wrote. “We all have an obligation to speak out and say so. And it’s within the power and obligation of tech companies to stop these vile lies dead in their tracks.”

“There’s a long history of black Americans being told they don’t belong—and millions are kept down and shut out to this day,” wrote former Texas Congressman Beto O’Rourke on Twitter. “@KamalaHarris is an American. Period. And all of us must call out attempts to question her identity for what they are: racist.”

Julián Castro, former Secretary of Housing and Urban Development, called the attacks “racist” and said they were “part of a right-wing effort to delegitimize an accomplished and powerful black woman.” Sen. Kirsten Gillibrand also condemned the attacks as racist.

Trump Jr., who has more than 3.6 million Twitter followers, later deleted the message. He has served as an vocal surrogate for his father’s reelection campaign.

A spokesman for Donald Trump Jr. claimed to the New York Times that the controversy over Trump’s tweet was essentially a misunderstanding. 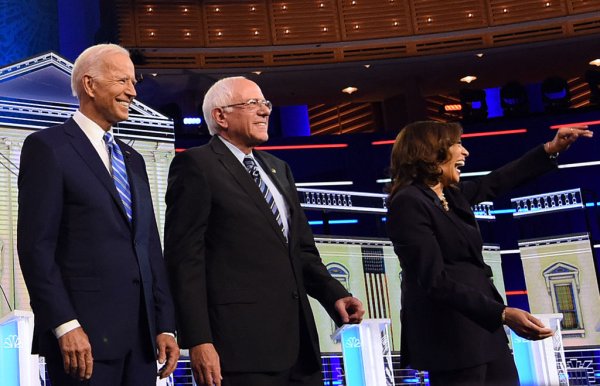