The first Democratic primary debates appear to have cost Vice President Joe Biden some of his supporters – at least for now, one poll suggests.

Polling by Morning Consult and FiveThirtyEight before and after the two debates on Wednesday and Thursday suggests that support for Biden dropped by about 10 points among likely Democratic voters, when asked who they would choose if the election were held tomorrow.

Biden had previously enjoyed a healthy lead over the other Democrats. The polling prior to debates, which was conducted between June 19 and 26, suggested that Biden was supported by about 41.5% of voters. At that point, the polling showed Sen. Elizabeth Warren had the support of 12.6% of voters and Bernie Sanders had 14.4% of support.

Biden appears to have slipped in the polls after each debate, his support falling to 35.4% after the first debate and to 31.5% after the second round.

Post-debate analyses suggest that Sen. Kamala Harris’ strong debate performance – coupled with her willingness directly attack Biden, including his civil rights record – posed a challenge for the former Vice President. In one of the most heated moments of the debate, Harris drew attention to Biden’s previous opposition to busing as a tool to promote school integration.

The poll also showed Harris gaining a significant number of supporters. While she had the support of just 7.9% of likely voters before the debate, she had 16.6% of the the support afterwards.

Other candidates appeared to experience smaller gains and losses, according to the poll. Sen. Bernie Sanders’ support rose from 14.4% to 17.3% after the second debate; Sen. Elizabeth Warren’s support grew from 12.6% to 14.4%. 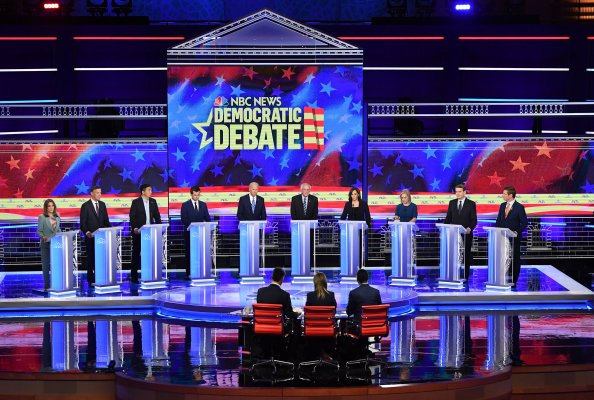 Here Are the Facts Behind Some of Democrats' Biggest Claims in Thursday's Debate
Next Up: Editor's Pick