Avengers: Endgame Is a Good — And Sometimes Great — End to Marvel's First Decade

Avengers: Endgame—the 22nd movie to emerge from the Marvel Cinematic Universe birth canal and the capper to the two-part saga that began with last year’s Avengers: Infinity War—makes more sense as an event than as a movie. The film has been meticulously crafted for people who care deeply about these characters, and it’s likely most of those viewers will leave the theater satisfied. Directors Anthony and Joe Russo (also the directors of Avengers: Infinity War, as well as two of the Captain America films) and their team of writers have ensured, with machinelike precision, that each Avenger gets his or her proper allotment of sensitive moments, as well as heroic ones. Once in a while, Endgame is enjoyable on its own terms, though mostly, you’ll be better off if you have at least a rough working knowledge of the MCU movies that have preceded it. It’s an entertainment designed to please many, many people and disappoint as few as possible, extravagant without necessarily having a vision beyond its desire not to put a foot wrong. It’s bold in the safest possible way.

In other words, as movies that are part of multi-billion-dollar franchises go, Avengers: Endgame is good enough. I must note here that I have little invested in the Marvel movies as the result of any attachment to Marvel comics. But I do care about the work of the actors who appear in them, performers like Chris Evans and Scarlet Johansson, Chadwick Boseman and Robert Downey Jr., Zoe Saldana and Jeremy Renner. All of these people have been terrific in MCU movies, even when they could easily get by with being less than terrific. Watching Endgame, I realized that I do care about Marvel characters because these actors have made me care.

The skill those actors—along with some I haven’t mentioned, like Tessa Thompson and Mark Ruffalo and Benedict Cumberbatch—bring to the Marvel movies in general, and to Avengers: Endgame specifically, only makes me wish these movies were breezier and more inventive, and less obsessed with the high-stakes, big-money fan-pleasing game. But you can’t have everything, and Endgame at least gives these actors something to work with. (Minor-to-moderate spoilers follow, so if you want to experience Endgame with the naïve blankness of a tadpole freshly launched into the pond, please stop reading here.)

Endgame opens with an unnerving, gracefully filmed prologue involving Renner’s Clint Barton, Hawkeye when in his superhero guise. He’s enjoying an outdoor picnic with his family when it becomes clear that what we’re seeing is a moment connected to the tail end of Infinity War: The instant supervillain Thanos (Josh Brolin) snapped his fingers—after having captured the last of those six all-powerful nuggets known as the Infinity Stones—and destroyed exactly half the world’s population, leaving the other half to grieve and remember. (It’s more cruel, when you think about it, to destroy half the world than all of it.) This megalomaniacal act was Thanos’s way of cleansing what he viewed as a corrupt universe. But Hawkeye, having retreated from Avengers duty to be a family man, wasn’t around to witness Thanos’s big finale—and, as Endgame begins, he doesn’t yet know that half his friends have turned to dust. And so, in this moment, we know what’s going to happen before Hawkeye does: He turns away from his family for just a millisecond, and in a blink, they’re gone.

Next we see the other remaining Avengers pulling themselves together after the tragedy—or, in the case of Scott Lang/Antman (Paul Rudd), just waking up after a Quantum Realm-induced nap. Lang quickly gets up to speed on what he missed, and comes up with the germ of a plan: Might the Avengers go back in time to foil Thanos’s plan of half-destruction? Lang introduces his idea to remaining Avengers Steve Rogers/Captain America (Evans), Natasha Romanoff/Black Widow (Johansson) and James Rhodes/War Machine (Cheadle). They bring this spark of an idea to the guy who might be able to make it work, Downey’s Tony Stark/Iron Man, who barely survived Thanos’s destructathon. First Stark says it’s impossible; then he changes his mind—but he also worries that if the scheme doesn’t work, he’ll lose all he’s gained in what has for him become a bittersweet time, an era during which he’s mourning his lost friends but also starting a new life for himself.

The plan to turn back time is less a major plot point than a mechanism to keep the story clicking, and the middle section—in which the Avengers break into groups to travel to specific places and years where they can grab one Infinity Stone or another before Thanos can get his dirty mitts on any of them—is the movie’s finest. Avengers: Endgame is a better movie than Avengers: Infinity War in one important sense: It relies less on milking tears out of us (for characters who have “died” but who we know will come back again—they’re too valuable to the franchise to be gone for good) than on focusing on what each of these characters might mean to us, given our history with them. The mid-section of Endgame shows the Avengers actors at their best. Chris Hemsworth, as a Thor who has slid into a state of pot-bellied depression post-Thanos, gets a chance to reunite with his long-dead mother, Frigga (Rene Russo), in the kingdom of his birth, Asgard. He greets her tentatively, almost shyly, nearly dumbfounded by the gift of seeing her again even for a few moments; she discreetly asks about his funky eye. The tenderness between them is lush and quiet, underscoring what’s most valuable about Endgame: There is only one gargantuan, booming fight scene, and it’s not the centerpiece of the movie. It’s as if the Russo brothers have finally acknowledged that bigger, noisier battles amount to less rather than more. At least we can hope.

Endgame does give us some arresting visuals: Thompson’s Valkyrie riding on a winged horse, anyone? But generally, the actors are Endgame’s finest special effect. Though we’re made to wait for the entrance of Boseman’s T’Challa/Black Panther, it’s worth it: He coasts into the movie on a regal cloud. And Robert Downey, after playing Tony Stark/Iron Man for perhaps too many years, snaps back into form. In the 2008 Iron Man, Downey brought a kind of frazzled elegance to the role of Stark—his nervous energy seemed to spark from his fingertips, as if it were too much for his body to contain. In the years since, his Iron Man performances have become more brittle, more reliant on tics. But in Endgame, Stark’s moments of doubt feel lived-in—Downey’s performance is alive with prickly uncertainty. Even when Endgame hits its generally predictable beats, you can still count on the actors to shift the mood into slightly uncomfortable emotional territory.

The Russos and their writers clearly took pains to give nearly each character a gratifying arc, and a proper—if not necessarily soft—place to land. That must have been a lot of work, and a few of the Avengers get short shrift: The ever-so-powerful Captain Marvel (Brie Larson) drops out of the movie for a long stretch, eventually returning with…a short haircut. Some arc.

But the Russos more than make up for that with the discreet, wistful coda they give Steve Rogers/Captain America. It’s the movie’s single most gorgeous element, perfectly fitting for a guy who entered a 70-year sleep right after finding the love of his life. Evans’ Captain America has always been, physically speaking, the beefiest of all the Avengers, as sturdy and wholesome as the “after” picture in a Charles Atlas ad. Yet Evans has also always been one of the most understated actors in the franchise. As Steve, Evans’ smile is easy, friendly, in a stock all-American way. But there’s never been any swagger behind it. It’s the smile of a guy who’s lost something valuable, whose view of the future is perpetually tinted with the color of what he left behind. Avengers: Endgame isn’t a great movie, but there are flashes of greatness in it, and quite a few of them belong to Evans. His Captain America rewards us with a revelation and escapes with a secret. The best thing in Avengers: Endgame is everything he doesn’t say. 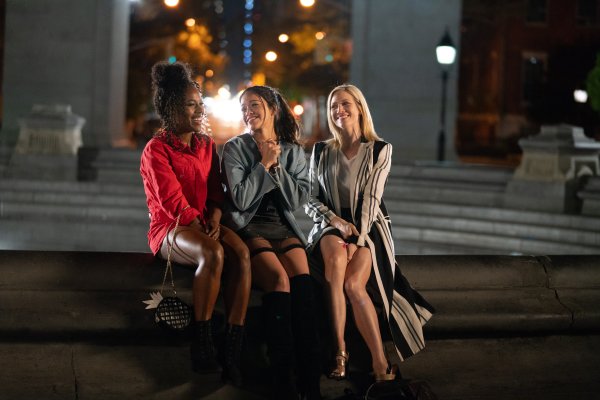 Review: In Someone Great, Gina Rodriguez and Friends Find More Than Sex in the City
Next Up: Editor's Pick