Pulitzer Prize-winning author Colson Whitehead‘s latest novel The Nickel Boys, about an abusive Jim Crow-era reform school, joins a backlist of books that point to urgent questions about identity, class and history. Whitehead, who appears on TIME’s cover this week, has found inspiration for his work in everything from his childhood summers in the Hamptons to zombie films. “The intent is for me to figure out through my art how America works, how people work, and hopefully readers come along for the ride,” he says. Here, Whitehead reflects on his nine books.

Whitehead’s debut novel follows the aftermath of an elevator crash where the blame is placed on the unnamed city’s first black female elevator inspector. “In New York City, inspectors have precincts sort of like cops,” Whitehead says. “So I thought, Wouldn’t it be weird if an elevator inspector had to be a real inspector and solve a case?”

The tale of John Henry, the black steel driver who died while attempting to outrace a steam drill, stuck with Whitehead for many years. In his second novel, a festival commemorating Henry draws a big crowd, including a young journalist who is hoping to beat a record for junketeering. “I wanted to be more expansive and have many different voices, a big American chorus,” Whitehead notes. “John Henry Days is very unruly, like the country itself.”

“After 9/11, I put down what I was working on to figure out how to live in my city,” Whitehead says. “It was part therapy, part exercising a new narrative muscle.” His nonfiction collection celebrates New York City, detailing areas and feelings unique to the city, like traveling through the crowds in Port Authority Bus Terminal or experiencing the crush of rush hour. “As I say at the end of the book, New York is a way of talking about the world, about any place that you love and has become a part of you.”

While walking around New York during the time he was writing Colossus, Whitehead grew curious about the way cities come together, like how street names are decided. Apex Hides the Hurt is centered around a community that hires a consultant to potentially rename their town. “I was thinking about how a city is formed and saw an article with a branding consultant, so I put those ideas together: a branding consultant on local history,” Whitehead says.

In Whitehead’s fifth book, 15-year-old Benji Cooper spends a formative summer in Sag Harbor, where he reckons with his identity and the trials of growing up. Whitehead himself spent summers with his family in Sag Harbor as a kid, and the book is reminiscent of his own experience. “It was time for me not to be so distant. I would grow as a writer and a person if I stopped avoiding personal material,” Whitehead says of the coming-of-age novel. “Now I’m happy to call it autobiographical.”

This apocalyptic novel explores life in an alternate version of New York City, which has been destroyed by a plague that has turned a majority of the population into zombies. “I saw Night of the Living Dead at an early age, and zombies became part of my psychological landscape,” Whitehead says. “I’d have zombie dreams every month for years.”

When Grantland asked Whitehead to cover the World Series of Poker in 2011, he didn’t want to go. But when they offered to pay his entrance fee so he could play himself, he enthusiastically agreed. Though Whitehead says he was a “pretty experienced home player,” he started training seriously before heading to Las Vegas. “Imagining the embarrassment of getting kicked out of the World Series of Poker on the first day forced me to try to be a better person, a better poker player,” he says. His seventh book expands on the piece he wrote on assignment, digging deeper into the world of professional poker.

“Like a lot of people, when I first heard those words I thought it was a little train,” Whitehead says of the underground railroad. In his eighth book, he imagines the journey of a young enslaved woman whose path to freedom involves a literal hidden railroad. “I didn’t think I could pull it off,” he says of the novel, which went on to win both the Pulitzer and the National Book Award. “In 2014, it seemed like I’d been avoiding it for so long that it was time to do the book that scared me.”

Inspired by the true story of an abusive reform school in Florida, Whitehead’s upcoming novel delves into the lives of two boys at the Nickel Academy. Elwood and Turner seek to discover their place in Jim Crow America while suffering mistreatment at the school. “It’s about places with no accountability. That dynamic between the powerful and the helpless, where our worst impulses can be let loose,” Whitehead says. 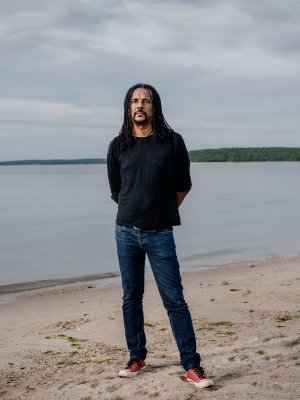 'I Carry It Within Me.' Novelist Colson Whitehead Reminds Us How America's Racist History Lives On
Next Up: Editor's Pick