Boris Johnson's Resignation Over Brexit Could Lead to Major Shakeups in British Politics. Here's What to Know

U.K. Foreign Secretary Boris Johnson announced his resignation on Monday, following hot on the heels of David Davis, the Brexit secretary, who tendered his resignation late Sunday night. The moves could force a vote of confidence in Prime Minister Theresa May which she is not guaranteed to win.

May currently holds a tiny working majority in parliament, and her pursuit of a Brexit deal that suits her divided party has led to crisis after crisis.

Both Davis and Johnson were influential “Brexiters” who used their positions in the cabinet to call for a “hard” Brexit — in other words, a complete break between Britain and the European Union, which Brits voted to leave in a 2016 referendum.

Why did Boris Johnson and David Davis resign?

Last Friday, May gathered her cabinet for an “away day” in an attempt to hammer out a consensus on Britain’s membership of the E.U. customs union, a sticking point of disagreement between hard and soft Brexiters.

May thought she had succeeded after Friday’s meeting, but by Sunday it had become clear that deep discord still remained in her fragile cabinet. Davis had long been dissatisfied that his control over Brexit was in name only, with government policy being defined from within the Prime Minister’s office rather than his own.

He said in his resignation letter on Sunday that he could not in good conscience argue for a Brexit deal with which he did not agree, and that Britain’s negotiating position was giving too much away too early. “The general direction of policy will leave us in, at best, a weak negotiating position, and possibly an inescapable one,” he wrote.

As an architect of the “Leave” campaign during Britain’s referendum, Johnson has long been seen as a leading Brexiter and someone with designs on the role of Prime Minister.

Theresa May tolerated his criticisms from within her cabinet because he was seen as less dangerous on the inside than the outside. Now, he will have more freedom to challenge May, and will likely stand if the Conservative party passes a vote of no confidence in the Prime Minister.

How do U.K. lawmakers force a vote of no confidence?

If 48 lawmakers send a letter to the chairman of the group within May’s party responsible for nominating the party leader, May will face a vote of no confidence. May would need the support of a majority of her party’s lawmakers to remain Prime Minister, if such a vote is called.

Some of May’s supporters say she will win such a contest. However, with Davis and Johnson gone, so-called euroskeptic lawmakers in May’s party will require strong convincing that her pursuit of Brexit will be satisfactory.

Davis has ruled out standing for the top job, but Johnson has not.

What does this mean for Brexit?

If May manages to avoid a vote of no confidence, the government’s plans on Brexit are unlikely to change. Earlier on Monday, she named Dominic Raab as the new Brexit secretary. His views on Brexit are similar to those of Davis, maintaining the balance May has long sought to bring to her cabinet between soft and hard Brexiters.

If a vote is called and May wins, it just might give her some power in negotiations with Brussels. Though the 2016 referendum was not binding, Britain is committed to Brexit. But May’s precariousness has long given her an air of weakness, especially when negotiating with the full 27 governments of E.U. states. If she wins, she might gain new confidence, not just in negotiations with the E.U. but in terms of making policy her cabinet can agree on.

If May does go, the future of Brexit will depend on who succeeds her. But failing a general election, any new Prime Minister will have to contend with the fact that the ruling Conservative party simply cannot agree on which Brexit policy to follow. They will face the same problems May is currently facing — the reason why many have deemed the Prime Ministership a “poisoned chalice.” 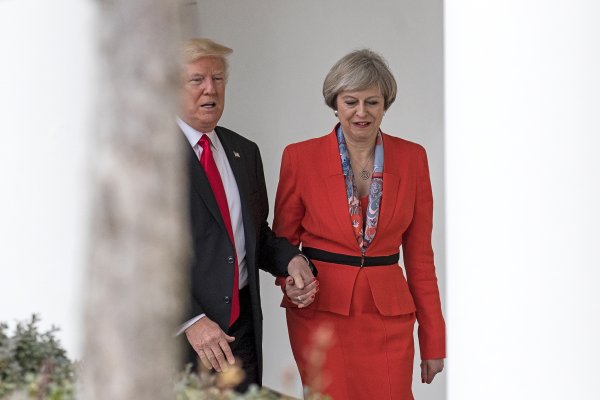 Thousands Are Expected to Join a 'Carnival of Resistance' in Britain to Protest Trump's Visit. Here's What to Know
Next Up: Editor's Pick