Tina Brown: How Britain Lost the Plot Over Brexit

When did Britain go out of its mind? As a transplant from London to New York, I’m often asked that question. Americans, watching the D-Day anniversary this week, find it hard to understand how the British ruling class so profoundly lost the plot since the 2016 vote to say FU to the E.U.

Given that over 70 percent of the British people dislike President Donald Trump, his outsized state visit to the UK was a rare uniting force in the midst of the three-year civil war.

His presence offered some ironic consolation that the last three years of furious argument in Britain are linked to more global fevers. That the country’s economic distress and the vast carelessness of its elite gave rise to mythic nostalgia and tribal chest-beating in other kingdoms, too. Exceptionalism is oh-so-unexceptional.

Yet Britain’s nervous breakdown has its own unique loony flavor, providing daily vignettes of a country trying to remember what it stands for. For decades the loss of empire was compensated by the lingering triumph of World War Two. The post-war generation was consumed by the earnest task of building a better world (and Britain). Those events and people are now a long time ago. The last hard patriotic triumph in most Brit’s recall was Margaret Thatcher’s 1982 invasion of an obscure dot in the South Atlantic, the Falkland Islands, to wrest it back from another country no one has time to read about, Argentina. Now all that’s left of Hope and Glory is Brexit champion Nigel Farage’s Union Jack socks and the certainty that the Queen is the last person who still knows how to behave in public.

The irony is that before David Cameron, Theresa May’s predecessor as prime minister, fecklessly called for the referendum just to pacify a rabid arm of his own party, few people in the country at large gave a toss about the issue. Europe came eighth in opinion polls about the nation’s concerns. But the very word “Remain” as a choice on the ballot—with its stench of stagnation—called-up the smugness that was anathema to the boiling white working class. Who wants to “Remain” in a place where Tory austerity cuts have stalled your income for years, where Polish immigrants are ahead of you for a National Health Service appointment, and the Guardian-reading media and political elite tell you you’re racist if you say so? Vote OUT of that, mate! Say Stuff it to Jonny Foreigner! Toffs in the Tory party who despise liberal meddlers had the momentum at last behind their cause, as well as the thrill of slumming it with boisterous blue-collar types. Brexit devolved into an identity war: an English counter-revolution between nationalists and internationalists, country geezers versus young metropolitans, Little England versus Great Britain. The Scottish and Irish Celts are such staunch Remainers that the Scots could be driven at last to vote for Independence and Northern Ireland pushed to unite with the Republic. U.K. RIP.

From the moment a flotilla of pro and anti-Brexit boats dueled on the Thames outside Parliament the week of the Brexit vote, the tone was set for successive national absurdities. Unlikely heroes and anti-heroes emerged. A viral favorite was John Bercow, the barrel-chested Speaker of the House of Commons, whose calls for “Order, Order Order” over the brawling MPs have sound-tracked the opposite of his exhortation. Piquantly, earlier this year, he was spotted with a sticker on his car that read “Bollocks to Brexit.” May’s doomed attempt to play the straight man in a Fawlty Towers world was torpedoed by her stunningly awkward dance-on to Abba at a Tory Party conference, looking, as Allison Pearson noted in the Telegraph “like a stork who had been struck by lightning.” May’s offer (twice) to resign in exchange for getting her own party behind a more sensible, watered-down Brexit deal was, according to Scottish leader Nicola Sturgeon, “the only time a leader has fallen on her sword and managed to miss.”

Many of the leading characters in the national meltdown don’t even take themselves seriously, let alone require us to. The thatched charlatan Boris Johnson, with his sliding allegiances and faux-Falstaffian ways, depends on everyone being in on the joke that he has no principles. Now that he’s again the frontrunner in the Tory leadership contest to be the next prime minster, he has proved there is no lie you can’t recover from if you have mastered the sly vernacular of British irony and gone to Eton. The gangly country squire and Brexiteer Jacob Rees-Mogg often answers interview questions in Latin.

On the other side, Labor leader Jeremy Corbyn, is an unreconstructed seventies socialist who presents as a refugee from the pre-Thatcher Winter of Discontent when undertakers went on strike. His limp endorsement of Remain and anti-Semitism within his party have shorn him of support. This is all good news for Farage, who has capitalized on the boredom most Brits feel with the one-story news-cycle and formed his own Brexit Party to charge off the cliff.

The problem with this daily, long running farce of cultural dementia is that it keeps obscuring Brexit’s dire likely outcome. We are about to see the impoverishment of a shrinking nation in the cause of a mirage of sausage -and-mash “sovereignty.” There is little meaningful talk now of details, or spelling out of calamitous consequences. British politics now lives in a cartoon strip.

Churchill characterized the Tory appeasement government in 1936 as: “only decided to be undecided, resolved to be irresolute, adamant for drift, solid for fluidity, all-powerful to be impotent.”

People like Farage regard Britain’s Remainers as today’s appeasers. The Brexiteers aren’t at war to safeguard “Great Britain” but to end it.

Brown is the author of The Vanity Fair Diaries 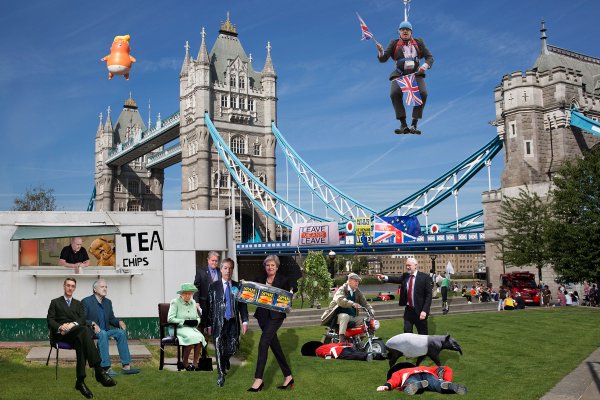 How Brexit Broke Britain and Revealed a Country at War With Itself
Next Up: Editor's Pick