Director Richard Curtis Knows People Hate Love, Actually—and He Has a Theory as to Why

Richard Curtis, the writer of such iconic romantic comedies as Notting Hill and Four Weddings and a Funeral, is aware that people have strong feelings about Love, Actually, the 2003 Christmas movie he wrote and directed. The movie wove together a number of storylines and starred, among many others, Hugh Grant, Emma Thompson, Alan Rickman, Keira Knightley, Liam Neeson, Bill Nighy, Laura Linney, Chiwitel Ejiofor and Colin Firth. He recently spoke to TIME about his new Beatles-themed film Yesterday, out June 28—and also weighed in on his most discussed movie.

Curtis: What surprises me is that Love, Actually ever got sold and seen at all. When we finished shooting it, it just didn’t work. And trying to edit it into the shape it’s now in was like playing three-dimensional chess because after every scene, you could go anywhere into any of the other things.

Normally, someone robs a bank, they’ve got to get in the car and drive away. And then the police chase them. But in this one we could go anywhere. I saw Love, Actually when it didn’t have a laugh in it and didn’t make any sense. So, I’m always vaguely glad it exists. That’s my starting point.

Look, I think the idea of Love, Actually was to push my luck. I thought if I can do a romantic film, could I do 10 of them and just do the best of? Or the most extreme scenes? So instead of writing a film and having 20 scenes, could I, as it were, write a film and just pick the three best scenes and leave it at that? Because at least two of the plots—the Hugh Grant and Colin Firth plot—were whole movies I was going to write.

So therefore, I suppose, it wouldn’t surprise you that the number of people who don’t like it would increase. And the number of people who do like it would increase. Because it was meant to be the most extreme version of how you would do a romantic film. I mean, it is an exhausting idea that there’s not only one couple who will kiss in the rain at the end, but nine couples who will.

Am I hearing something in your voice, like ‘Hmm, not my favorite film….”?

No, not at all, actually. Every film is like a child. I’m sure the reason why people watch Love, Actually so much is because they don’t know what scene is coming next. When I watch it, which I do about once every five years, I think “Oh, my God, that!? Oh, and we’re finishing that? That’s surprising, oh, I didn’t realize that….” I think it’s got lots of charms: The variety of the cast is adorable, and I like the sadder bits in it. So it’s exactly level with my other films.

I have worried over the years that it isn’t tonally very consistent. Let me put it that way: I slightly worry that it’s 11 films [in one]. But then, I worry that Notting Hill doesn’t have a subplot. I feel as though we should have had another story intertwining. It seems as though Julia [Roberts] just goes away and comes back and goes away and comes back. So I’ve got problems with all of them.

Do you feel like you created or destroyed Hugh Grant, on balance?

[Laughs] He was always going to be unhappy. So all I think I did was just give him a different kind of unhappiness. 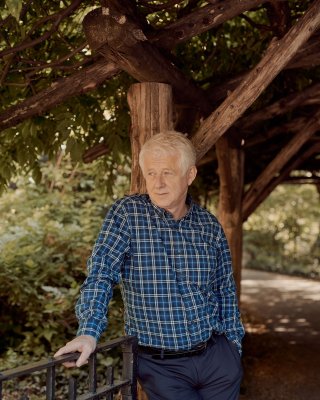 Rom-Com Master Richard Curtis Is Still Trying to Prove That All We Need Is Love
Next Up: Editor's Pick