President Donald Trump sat down with a group of TIME journalists on June 17, the eve of his official re-election kickoff in Florida.

Over the course of a 57-minute interview, Trump talked about his foreign policy approach with Iran, China and Mexico; his re-election campaign; his record of achievements and Special Counsel Robert Mueller’s investigation.

He also made a number of assertions that aren’t backed up by the facts. In April, the Washington Post compiled a list of more than 10,000 false or misleading claims he has made since moving into the White House.

On construction at the U.S. border

The facts: Several construction projects are taking place at the Mexican border, but they are not the wall described by Trump in his 2016 campaign. The majority of the projects awarded so far are to replace existing barriers, not add new ones. In addition, the Trump Administration faces unresolved legal challenges over its use of emergency powers to fund construction.

Migrant children file through a tent city in Tornillo, Texas, on June 18. The U.S. houses unaccompanied minors at the detention facility, which came under scrutiny amid controversy over the Trump Administration’s family-separation policy, which was later reversed.
Mike Blake—Reuters

The facts: While the Obama Administration separated some families as a result of decisions on individual cases, it did not have a policy to do that on a systematic basis. In 2018, the Trump Administration announced a “zero tolerance” policy of referring all border crossings for federal criminal prosecution, which led to children being separated as their parents were sent to jail. Trump later overturned the policy.

What Trump said: “I had the largest cut in regulations in the history of the country. In two years, I cut more regulations than any other President, no matter how long their term was.”

The facts: Other presidents have made big moves: The Carter and Reagan Administrations deregulated the airline, trucking and railroad industries, while the Clinton Administration ended the Interstate Commerce Commission. Other than that, experts say there’s no simple way to compare which president has cut more.

On Russian outreach in 2016

Special Counsel Robert Mueller makes a statement about the Russia investigation on May 29, 2019 at the Justice Department in Washington, DC.
Chip Somodevilla—Getty Images

What Trump said: Mueller “said, in fact, there was pushback. He said they pushed back. Our staff pushed back.”

The facts: The Trump campaign and associates had more than 100 contacts with Russians during the 2016 election, including a controversial meeting in Trump Tower, negotiations over a Trump Tower Moscow project and various discussions and meetings. The Mueller report found that after Russian contacts, “in some instances, the Campaign was receptive to the offer, while in other instances the Campaign officials shied away.”

Read More: Here Are All the Times Donald Trump and His Associates Intersected With Russians

On Obama’s response to Russian meddling

Russia's President Vladimir Putin (L) and US President Barack Obama meet on the sidelines of the G20 summit.
Alexei Druzhinin

What Trump said: “When the FBI went to Obama in September, and they told him about this, he did nothing because he thought Hillary Clinton was going to win, and he didn’t want to rock the boat.”

The facts: Although critics say it could have done more, the Obama Administration took multiple steps to counter Russian meddling in the 2016 election. CIA Director John Brennan and other intelligence officials privately warned their Russian counterparts not to continue with their efforts, while President Obama directly confronted Russian President Vladimir Putin at a G20 meeting. The White House asked top Republicans to join a bipartisan statement condemning interference, but Senate Majority Leader Mitch McConnell reportedly declined. A month before the election, U.S. intelligence agencies released a joint statement blaming Russia for the hacked emails. 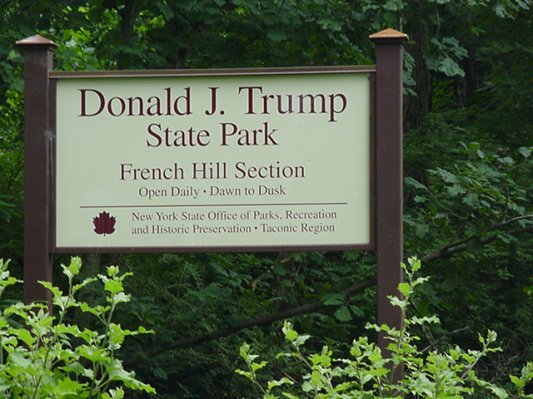 Is Trump State Park Worth $26.1 Million?
Next Up: Editor's Pick