The Fight to Save Sudan from the Counterrevolution

Revolutions are hard to launch and harder to sustain. That’s the legacy of the Muslim Brotherhood’s Mohamed Morsi, the man elected Egypt’s President following the Arab Spring demonstrations that ousted strongman Hosni Mubarak. After a year in power, Morsi’s government was overthrown by a military coup, and now Egypt is led by a military-backed strongman, Abdul Fattah al-Sisi. Morsi collapsed and died on June 17 inside a cage in a Cairo courtroom, where he was facing espionage charges.

But thousands of protesters in Sudan, aware that the country’s army would likely try to replace one military-backed tyrant with another, refused to leave the streets of Khartoum. Organizers of a large protest outside military headquarters demanded that al-Bashir be put in prison. The army complied.

On June 3, men in military fatigues opened fire on the crowd. At least dozens were massacred, and hundreds more were wounded. Witnesses reported that soldiers dumped bodies into the Nile to hide the death toll. The counterrevolution had begun.

Like Egypt’s al-Sisi, a military man has stepped forward to restore order in Sudan. Mohamed Hamdan Dagalo, known as Hemeti, now serves as vice president of Sudan’s ruling military junta. On June 5, he spoke out against the violent crackdown on protesters and pledged to bring the perpetrators to justice. “We are working hard to take those who did this to the gallows,” he said.

The trouble, say the protesters, is that the murders were committed by the so-called Rapid Support Forces, a paramilitary force, previously known as the janjaweed. This group is also widely blamed for murder, rape, theft and arson committed against civilians in the Darfur region of Sudan. The janjaweed commander is Hemeti himself. Human Rights Watch, a nongovernmental watchdog group, holds Hemeti responsible for overseeing “torture, extrajudicial killings and mass rapes” in Darfur.

Counterrevolutions often earn backing from interested neighbors, and Hemeti appears to have powerful friends. He reportedly visited Saudi Arabia in May and promised Crown Prince Mohammed bin Salman that Sudan’s military would support Saudi goals in the region, including sending Sudanese soldiers to support the Saudi war in Yemen.

Aware that Hemeti is unlikely to bring himself and his followers to justice, the protesters have now called for night marches in Khartoum and other cities in hopes of forcing the military to make concessions. The protesters say they won’t surrender their fight. But as in Egypt, it’s the men with guns who are likely to carry the day. 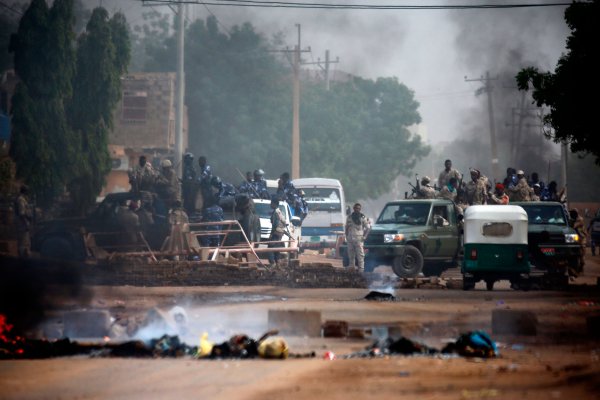 Sudan’s Military Calls for Election After Violent Crackdown on Protesters
Next Up: Editor's Pick