Betty White Has Died at 99. Here's How The Golden Girls Transformed Her From Star to Legend

Betty White has been a household name since the 1950s, but it was her work on The Golden Girls that cemented her status as an icon long before she died on Dec. 31 at 99.

“I thought she would live forever,” White’s agent Jeff Witjas told People in a statement. “I will miss her terribly and so will the animal world that she loved so much.

When the show premiered in 1985, White was a natural as the innocent, kind-hearted Rose Nylund—who considered herself a wild woman because she dared to eat raw cookie dough. White cleverly imbued Rose with a gullible naïveté, letting her serve as the foil for Dorothy’s barbs and Blanche‘s eye rolls. Whether telling yet another St. Olaf story or doing one of her many selfless deeds, Rose just “wasn’t one to blow [her] own vertubenflugen.” And it was precisely that mix of humility, sweetness and loyalty that endeared her to viewers for decades.

Besides, as Rose admitted, it wasn’t her fault her cousins have been marrying each other for generations.

A Beverly Hills High School graduate, White was as savvy in real life as Rose was seemingly dim-witted, and she enjoyed a decades-long career in Hollywood that continued to flourish when so many of her peers found the opportunities disappear when they reached a certain age.

White started her television career while just a teenager—dancing “the Merry Widow Waltz” on an experimental TV show in 1939, when the medium was still in its infancy—and never really stopped. In fact, she entered the Guinness World Record book in 2014 as the holder for “longest TV career for an entertainer (female).”

Betty White, at the Tournament of Roses Parade on January 1, 1970.
Courtesy Everett Collection

As a young actress filled with ambition and tenacity, she landed a spot in a Parkay margarine commercial after reportedly hanging around the office of producer Fran Van Hartesveldt until he caved and offered her a job. She later spent six days a week on the Al Jarvis variety show Hollywood on Television. That led to her producing her own sitcom, which she also starred in, called Life With Elizabeth. It was a feat that was as rare then as it is now, and she earned her first Emmy nomination for the work—just two years after the awards show came into existence.

Later, she had two versions—one a sitcom, one a talk show—of The Betty White Show, starred in The Mary Tyler Moore Show playing the man-crazy Happy Homemaker Sue Ann Nivens, and was a staple on game shows like Password and Match Game. She also had a chance to work with her future Golden Girls cohorts in the years before the iconic show’s debut, earning a few guest spots on Maude with Bea Arthur, and starring alongside Rue McClanahan in Mama’s Family. White said one of the favorite shows she ever worked on was The Pet Set, which she wrote, produced and starred in. She reportedly could feature any creatures she wanted on the show, a huge bonus for the lifelong animal lover and animal welfare advocate.

A comedic pioneer, White would have been remembered as an actress who left an indelible impact on her field even without The Golden Girls, but the beloved sitcom earned her new generations of fans who continued to revere White-as-Rose long after the show went off the air in 1992.

The idea for the sitcom came about almost by accident. Executive producers Paul Junger Witt and Tony Thomas pitched a different show to executives at NBC, who replied that they were interested in a show about women of a certain age. (According to the show’s creators, that “certain age” was “hovering around late 50, early 60s.”) While the character of Dorothy Zbornak was written with Arthur in mind, a casting call went out to figure out who would play her roommates: Southern belle Blanche Devereaux, sassy Sicilian Sophia Petrillo, and wide-eyed Minnesota transplant Rose Nylund.

In 2010, White told the Associated Press that everyone knew the show was going to be something special when they first read the pilot. “You get a lot of scripts mailed to you and not too many of them are good, but when this one came along it just hit the spot,” she said at the time. She also noted that they initially approached her “with the idea of me doing Blanche.”

White came in and auditioned to play the seductive homeowner, but the director soon had a stroke of brilliance. “When Betty came in, she read the part of Blanche, but [director] Jay Sandrich said, ‘Why have her do Blanche? She already played that character on Mary Tyler Moore. Why not have her be Rose?'” creator Susan Harris told Vulture in 2017.

White played the daft Rose brilliantly, and won her third Primetime Emmy in her very first season portraying the St. Olaf native. The Golden Girls aired on NBC for seven years beginning in 1985, and White was nominated for Outstanding Actress for every year of the show’s run. When the show ended, White continued playing Rose on the spin-off series The Golden Palace, which lasted only one season.

White was in her early 70s when she said goodbye to Rose for good–but her career was far from finished.

She joined the cast of Bob opposite Bob Newhart in 1993. She later turned what was supposed to be a guest spot on Hot in Cleveland into a full-time gig when she was 88 years old. She also landed guest spots on That 70s Show, Boston Legal, and Bones, and had a memorable turn as “Gammy” in the 2009 rom-com The Proposal.

When Golden Girls went into syndication, and then became available for streaming, White’s understated comedic brilliance was introduced to a new generation—and they loved her. “She is just one of the most spectacular people on the planet,” Junger Witt told Vulture in 2017.

With a knowing wink, White used her persona as the adorably gullible Rose in later years to shock audiences with unexpectedly bawdy humor. Like when she roasted William Shatner for a Comedy Central special and stunned the audience with her unexpectedly racy speech. Or when she crassly endorsed the Deadpool movie, did vodka shots with David Letterman, or paid tribute to hip hop legend Queen Latifah on VH1’s Hip Hop Honors: All Hail the Queens.

She was so beloved that some determined fans launched a Facebook campaign to convince Saturday Night Live to have White host an episode. The campaign garnered enough traction online that it eventually caught the attention of SNL creator Lorne Michaels, who invited White, then 88, to host the show in May 2010.

Despite spending decades in front of TV cameras, White claimed she had to battle stage fright while hosting the iconic show. Even so, White won her fifth Primetime Emmy for the gig, and helped SNL earn some of its highest ratings of the season.

White was honored for her extraordinary career during the 70th Emmy Awards in September 2018, where she joked about how long she had been working in Hollywood. “Somebody said something the other day [about how I’m] the first lady of television, and I took it as a big compliment,” White said. “Then I heard her say to her daughter, ‘Yeah, first lady–she’s that old! She was the first one way, way back.'”

But White displayed her gratitude and awe at her long career when accepting her Guinness World Record. “I have no regrets at all,” she said in 2013. “I consider myself to be the luckiest broad on two feet.” 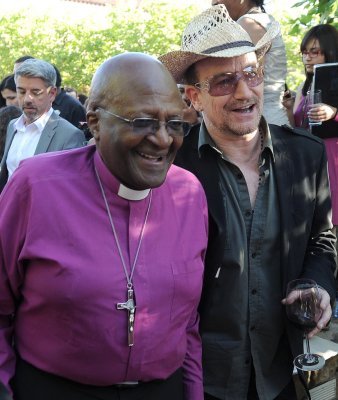 The Lessons I Learned From Desmond Tutu
Next Up: Editor's Pick