There are a lot of great karaoke songs in the world—Natalie Imbruglia’s “Torn”, Journey’s “Don’t Stop Believin’”, and Destiny Child’s “Say My Name” just to name a few. One song that is not normally included in the pantheon of great sing-along songs, mostly because it has one lyric that punctuates long musical interludes, is The Champs’ “Tequila”. That song’s reputation may change, though, thanks to singer Andy Rowell’s performance on America’s Got Talent .

While Rowell is a comedian by trade, he has a deep and abiding love for karaoke and is on a mission to elevate it from drunken bar sing along to respected art form. “When I was growing up, I was really inspired by all sorts of music but my first time really singing was at a karaoke bar,” Rowell explained in his pre-performance interview. “Some people think, ‘Oh, it’s kind of amateur-ish,’ but it’s just as professional as a normal singer. There’s just lyrics on a screen.”

Rowell then took to the stage on the reality show to perform, making his job even harder by choosing to sing “Tequila”. As the music played, every few minutes—and right on time—he would shout the word, “Tequila!” just like in the original song. By the end of the performance, the crowd and at least one of the judges was shouting along with Rowell. The unusual song choice made it difficult to know how the judges would rule. “Song choice is always important on this stuff,” judge Howie Mandel told Rowell. As it turned out, Mandell was a big fan. “I love you,” he said, citing not only Rowell’s song choice, but his “exuberance and excitement.” He, along with the other three judges, all gave Rowell a big yes to push him through to the next round.

Rowell probably selected the song because he knew it would be a hit with the crowd. As Billboard reports, Rowell previously posted a performance of the song on Instagram where it went viral, currently at more than 2 million views. 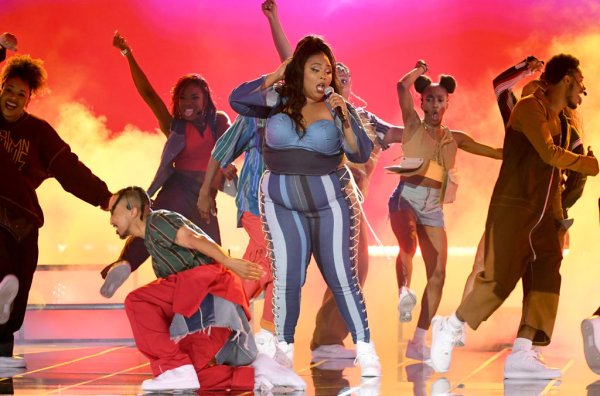 Lizzo's MTV Movie & TV Awards Song Had the Crowd On Its Feet
Next Up: Editor's Pick