Something curious happened on a New York City subway train recently — and for once, it was a good-curious moment.

Typically, New York City’s subways are a mode of transportation where people tend keep to themselves, but that collective reserve didn’t stop a group of commuters from getting into their groove when the moment (and the music) felt right. In video captured by civil rights attorney and former Obama associate staff secretary Joel Wertheimer, a car-full of passengers are seen breaking out into song together. Their jam? The Backstreet Boys 1999 megahit “I Want It That Way” together.

It all started when a car-hopping man arrived onto the scene with a speaker blaring the track. Yes, the commuters still knew all the words and Wertheimer says it was completely random. “Everybody was mumbling the words at first and then it just sort of crescendoed,” Wertheimer told TIME. “Joyful is the best word I have for it.”

The resulting video has gotten more than 6,000 people talking, and Wertheimer later implored those who enjoyed the moment of brightness to donate to the Coalition For The Homeless. “Not everybody on the train in New York is so lucky,” he tweeted.

Of course, the boys are all in.

Consider it a refreshing departure from the typical attitude toward subway travel. Also, let’s make karaoke cars on the E train a real thing, please? 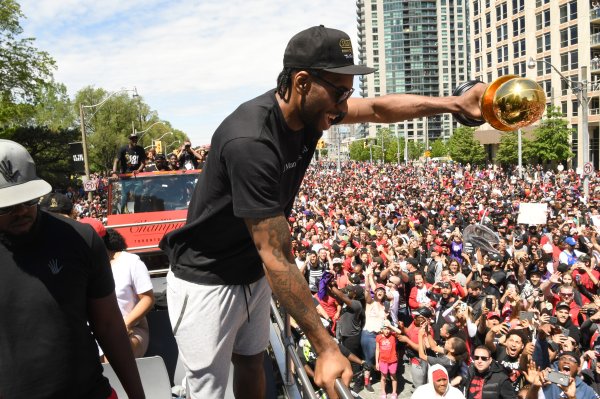 'Plant Guy' Has Delivered Kawhi Leonard His Housewarming Gift and the Internet Has Deemed Them Both Heroes
Next Up: Editor's Pick