Lizzo’s MTV Movie & TV Awards performance at Santa Monica’s Barker Hangar was the shot of adrenaline that awards shows have been looking for, lighting up the crowd — and social media — as she sang “Juice.” The 2019 MTV Movie & TV Awards were hosted by actor Zachary Levi and took place on June 15, but aired on Monday night.

Singer-rapper-flutist Lizzo, whose album Cuz I Love You dropped in April, took to the stage for a rendition of her popular, dance-worthy funk-R&B song as one of the evening’s only musical performers. Luckily, the crowd was in for a treat.

It wasn’t just a straightforward performance: Lizzo started off as a soloist onstage decked out in a silky choir robe, a definite departure from her usual bold and body-baring costumes. In a move reminiscent of the dramatic flourish from Sister Act 2, Lizzo and her group of backup singers, also in robes, quickly got the directive to do away with their outerwear. They then burst out into an exuberant performance.

Lizzo sang, danced, twerked, got the audience on its feet and participating in vocal scales and showcased her infectious energy. Spotted singing along in the crowd: Jada Pinkett Smith and her son Jaden Smith, and Captain Marvel star Brie Larson. Those aren’t her only celebrity fans: the evening revealed her she has many stars in her corner, from James Blake and Jameela Jamil to Dan Levy and Sandra Bullock.

The MTV Movie & TV Awards may not be the generally-more-recognized MTV Video Music Awards (confusing, yes — those come up in August), but with this debut, Lizzo may just find herself getting plenty more airtime. 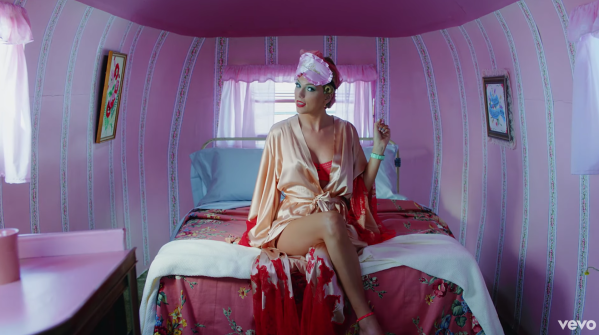 Here's the Deal With the References in Taylor Swift's "You Need to Calm Down" Video
Next Up: Editor's Pick