Awards Season Hit a New Low at the 2019 Grammys. Where Do We Go From Here?

If you went into Sunday’s 61st Annual Grammy Awards telecast with no prior knowledge of the global music industry, you might have come away from it believing that Neil Portnow was the biggest star in attendance. While surprise guest Michelle Obama had to share the spotlight with Lady Gaga, Jada Pinkett-Smith, Jennifer Lopez and host Alicia Keys at the top of the show, Portnow—the outgoing Recording Academy president and CEO—took the stage just before its scheduled conclusion. His appearance was preceded by a video thanking him for his work, with testimonials from such artists as John Legend, Céline Dion and Andra Day. Despite the time crunch, his unhurried valedictory speech proceeded without interruption. Winners Drake and Dua Lipa, both of whom made comments critical of the Academy, weren’t afforded the same courtesy.

In the context of recent Grammy drama, Portnow’s victory lap—in which he proclaimed his support for “diversity and inclusion”—might’ve felt more like a final insult. The Academy has routinely faced criticism for failing to honor black artists; even the Best Rap Album category tends to favor white artists, with Eminem taking the trophy seven times and Macklemore & Ryan Lewis’s cloying The Heist beating out superior releases from Kendrick Lamar, Drake and Kanye West in a notoriously bad call from 2014. Three years later, even Adele was disappointed when her 25 beat out Beyoncé’s opus on black womanhood, Lemonade, for Album of the Year. When viewers called out the lack of awards for women last year, Portnow replied: “I think [change] has to begin with women who have the creativity in their hearts and souls, who want to be musicians, who want to be engineers, who want to be producers, who want to be part of the industry on the executive level to step up.” (“I guess this year we really stepped up,” Best New Artist Lipa quipped on Sunday, just before an abrupt cut to commercial.) In 2019, the Grammys finally felt the wrath of all the superstars the Academy had alienated over the years.

The telecast certainly had its high points. In an evening when women artists—and openly queer women in particular—finally took the spotlight, Janelle Monáe, Cardi B, Diana Ross, Brandi Carlile, Lady Gaga, newcomer H.E.R. and the surprisingly dynamic duo of Lipa and St. Vincent all gave triumphant performances. Icons Aretha Franklin and Dolly Parton got their due in thoughtful tributes from younger singers (who still couldn’t upstage 73-year-old Dolly herself). Latin pop got some rare (if kind of essentializing) Grammy attention in an opening number that featured Camila Cabello, Ricky Martin, J Balvin and Arturo Sandoval. Cardi made history as the first female solo artist to win Best Rap Album. And I had zero complaints about the night’s top prizes: country crossover star Kacey Musgraves took home an Album of the Year trophy for her acclaimed Golden Hour, while Song of the Year and Record of the Year both went to Donald Glover’s musical alter ego Childish Gambino for “This Is America.” These wins were a credit to both an expanded, diversified voting body and an Academy that stepped up its recruiting efforts in 2018, even if the ceremony found the organization’s leadership and the show’s producers as arrogant as ever.

Not that all of these winners were in the house to receive their awards. Childish Gambino, like fellow A-listers Beyoncé and JAY-Z, Kendrick Lamar, Taylor Swift, Justin Timberlake, Kelly Clarkson, Rihanna and Ed Sheeran, neither performed at nor attended the Grammys. Ariana Grande, who won Best Pop Vocal Album in one of dozens of awards handed out before the telecast, tweeted that she’d pulled out of the show because producer Ken Ehrlich “stifled” her “creativity & self-expression.” (Instead of trying to mend the Academy’s relationship with one of the biggest names in music, Ehrlich insisted that he was “collaborative.”)

Drake’s emergence from backstage to accept his Grammy was even more of a surprise than Obama’s cameo; he’d avoided the red carpet and reportedly declined to perform. In fact, it’s likely that he only showed up in hopes of getting the mic and, in effect, speaking for many of the pop and hip-hop titans who sat out the event. “We play an opinion-based sport, not a factual-based sport,” he said. “This is a business where sometimes it’s up to a bunch of people that might not understand what a mixed-race kid from Canada might have to say or a fly Spanish girl from New York.” Drake’s mic got cut, and CBS went to commercial, just after he assured his peers that, “If there’s people who have regular jobs who are coming out in the rain, in the snow, spending their hard-earned money to buy tickets to come to your shows, you don’t need this right here.”

Though the Academy doesn’t seem to understand it yet, Drake was absolutely right. Popular music has always been a few steps ahead of the Grammys, which tend to reflect the classic-rock and adult-contemporary tastes of its core membership. (Remember 2012, when Mumford & Sons took Album of the Year, in an insult to Frank Ocean’s masterpiece Channel Orange that led to Ocean declining to submit 2016’s Blonde for consideration? “I think the infrastructure of the awarding system and the nomination system and screening system is dated,” he said at the time. “I’d rather this be my Colin Kaepernick moment for the Grammys than sit there in the audience.”) But over the past several years, as artists have gained unprecedented access to their fans through social media accounts with millions of subscribers, their reliance on (typically white and male) suits at record labels and TV networks has greatly diminished. Whether for reasons of politics, pride, vanity or simple scheduling conflicts, there’s not much reason for an established superstar to grace primetime with a performance stage-managed by outside creative forces—or sit in the audience waiting for a stodgy Academy to validate their work.

That shift was painfully obvious in the parts of the program that weren’t saved by the talent and charisma of the artists who actually attended. It’s easy to imagine Beyoncé, who played a fictionalized Diana Ross in Dreamgirls, helming the Motown tribute; instead, the role went to Jennifer Lopez, whose career has always been more closely associated with Latin pop. Host Alicia Keys played a medley of songs that concluded with only her part of JAY-Z collaboration “Empire State of Mind.” The roster of presenters, which included football players, Wilmer Valderrama and Keys’ producer husband Swizz Beatz, felt scraped together from a short list of celebrities who were attending but not performing at the ceremony. Audience reaction shots were brief and relatively infrequent, probably to minimize the impression that this year’s crowd was underwhelming.

We don’t have to go farther than YouTube, these days, to watch a great live performance by a favorite musician. And if the Academy has finally woken up to the great work women are doing in all corners of the industry, well, it’s still embarrassing for the organization that it slept on those contributions for so long. What makes awards shows unique is the opportunity they give us to see artists we love or hate interact, speak from the heart and support or even pick fights with each other; they make us feel like we’re privy to conversations that usually take place backstage (or in private jets). The Grammys are supposed to dazzle us with the industry’s sheer star power. By that measure, “music’s biggest night” felt smaller than ever.

That’s a problem for Portnow’s legacy, as well as for Grammy Awards in the years to come. But it’s also one more swing and miss for an awards-industrial complex that is in danger of striking out again, in two weeks, at the Oscars. If that Academy doesn’t learn from the mistakes it keeps making—bad host picks, scant recognition for women behind the camera, Best Picture nominations for films by alleged abusers like Bryan Singer—it could have a night as bleak as Sunday in its future. 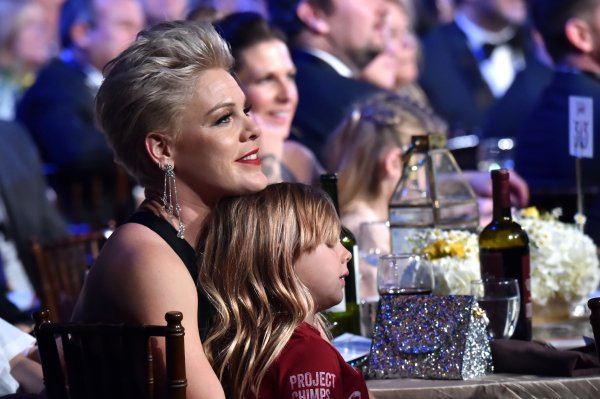 Pink's Kids Gave Her the Most Adorable Homemade Aluminum Foil 'Grammy Trophy'
Next Up: Editor's Pick