When Nicki Minaj is on the performance list for an awards show, you know she’s going to deliver. The Queen rapper, whose new album just dropped Aug. 10, made quite a mark at the 2018 MTV Video Music Awards: she chose to stage her show-stopping performance at the Occulus.

Singing from downtown Manhattan’s Oculus, the transport hub and shopping center that opened in the World Trade Center district recently, the Queens rapper served up an energetic medley of songs from her album, opening with “Majesty” before shedding her elaborate pink cape to rap “Barbie Dreams” and one more track, dressed in golden armor.

In Queen and on tracks like the incendiary “Barbie Dreams,” Minaj called out nearly all of her fellow rappers in the game, sending them sly disses and playing off of long-brewing inter-industry beef. So of course she had to come through with a strong appearance at this year’s VMAs to defend her title and reign in rap’s hierarchy.

Minaj won earlier in the the evening for her track “Chun Li,” as Best Hip-Hop Video. Best Hip-Hop Video is an award she’s taken home before as well, for 2011’s “Super Bass” and 2015’s “Anaconda.” This year she won against serious contenders like Beyoncé and Jay-Z’s joint project, Cardi B, Drake, J. Cole and the Migos, all in the same category. 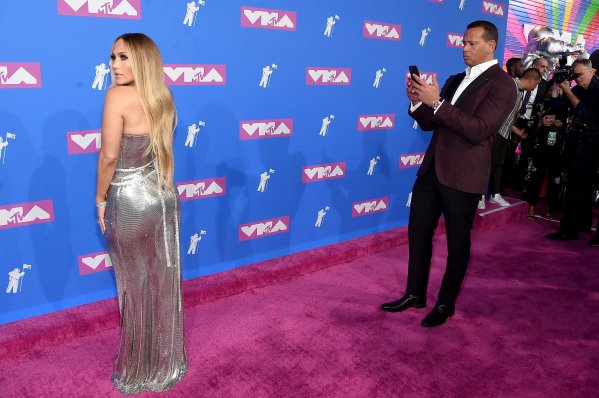 A-Rod Confirms He's a Top-Notch Instagram Boyfriend to Jennifer Lopez at the 2018 MTV VMAs
Next Up: Editor's Pick