With Democratic primary debates having begun on Wednesday and continuing on Thursday, featuring 20 candidates, the party is facing its largest field of candidates in modern history. But part of the reason this moment stands out is that this kind of crowded and competitive field is a relatively recent phenomenon.

The potential for having so many candidates in contention is the result of party reforms in the early 1970s. Those changes were made after Americans took to the streets when Hubert Humphrey became the Democratic nominee at the 1968 Democratic National Convention in Chicago without having campaigned in any primary races.

“Primaries in the old system were few and far between,” says Elaine Kamarck, Senior Fellow at the Brookings Institution and author of Primary Politics: Everything You Need to Know about How America Nominates Its Presidential Candidates. When primary elections did happen, they were “beauty contests” used by the party to test electability, but were separate from the selection of a state’s delegates to the party’s nominating convention. “The old nominating system was controlled ultimately by elected officials and party officers of the Democratic party,” sitting down with the governor in a smoke-filled room. That changed for Democrats between 1972 and 1976, as primaries became the dominant way of determining delegates and thus nominating the candidates. (The Republican party also made some reforms to reduce the power of party bosses, but overall, the party didn’t undertake the kind of reforms that Democrats did until Democratic-controlled state legislatures made more open primary systems the law, according to Kamarck.)

In the 1976 election to replace Gerald Ford, who had become President upon Richard Nixon’s resignation, the impact of the change was clear: 17 Democrats ran for President, by one count.

That year, there were 27 primaries, the biggest to that date, says Kamarck. It was thus the first year in which the notion of primary momentum existed — and Jimmy Carter, a peanut farmer turned one-term Georgia Governor, seized it, becoming the nominee and eventually the President.

“Carter’s call for a moral revival of sorts seems to have struck home in the American psyche, vintage 1976,” TIME noted in a cover story that year. “Battered by the Vietnam War, Watergate, scandals and abuses in high places, many Americans clearly welcome Carter’s confidence in them and the worth of their country, and his soft-spoken promise to restore a moral purpose to national life.”

But Carter’s success wasn’t just a matter of his message. He also benefited from understanding of the importance of the primaries, and of the fact that they meant “establishment” candidates, such as former Vice Presidents like Humphrey had been in 1968, could be challenged.

“No one took Iowa seriously,” says historian Julian E. Zelizer, author of Fault Lines: A History of the United States Since 1974 and a professor of History and Public Affairs at Princeton University. “Most candidates didn’t go there. Carter said, ‘If I win there, I could use that as a way to build momentum. So he goes door-to-door, goes to every dinner, sleeps there [in the homes of Iowan supporters]. That was him understanding that the process had changed, that the media would be more important in creating a sense of who has momentum.”

The 1976 election showed Americans that, thanks to the primary system, someone from outside Washington could win the whole thing — a lesson reinforced in 2016 with President Trump’s victory. That year also showed how much things can change before Election Day. There wasn’t a clear front runner, but favorites included Arizona Congressman Mo Udall and Senator Henry “Scoop” Jackson from Washington state. “The overall caution I take from 1976 is that people favored now may not be in that position when the voting starts,” says Kyle Kondik, the Managing Editor of Sabato’s Crystal Ball at the University of Virginia Center for Politics.

And the crowded field isn’t the only parallel between 1976 and today, Zelizer says. The then-unprecedented number of candidates came during unprecedented times. Then, Watergate shook up political norms; now, President Trump has changed the conversation in his own way. “Among Democrats there’s a sense of crisis,” he says of the 2020 race. “I think that encourages lots of people to participate.”

The 1976 primary would have a ripple effect on future Democratic primaries.

After the unicorn candidate Carter lost re-election in 1980 to Ronald Reagan four years later, there was a sense that establishment types were the safer bet. Superdelegates — selected to attend the convention and vote, but free to support anyone they want and change their minds at any time — were added to the nomination mix as one way to give party leaders and elected officials more of a say in choosing the nominee. (In 2018, the Democratic Party scaled back their powers in response to concerns that these insiders skewed the votes for the 2016 nominee Hillary Clinton.)

But a safe choice may not be safe after all, says Zelizer. In January 1983, Reagan initially seemed beatable, and polls showed Carter’s Vice President Walter Mondale up nine points on him. The superdelegates were key in nominating Mondale. But by November 1984, Reagan was popular, the economy was strong and Mondale lost. Four years later, Reagan’s Vice President George H.W. Bush was able to ride the coattails of his popular boss to victory despite the Iran Contra scandal, defeating Democratic nominee Massachusetts Governor Michael Dukakis.

So where does the 2019-2020 primary season fall in this history? It’s likely the biggest field in modern history, at least in terms of “the sheer number of people with good résumés who are at least well-known in the political world, if not the broader spectrum of American politics,” as Kondik puts it.

And it arguably has the biggest number of moonshot candidates too, as the changes that started in 1972 continue to this day.

As Kamarck sees it, “Most of the races on both the Democratic and Republican side [of history] have been composed of people who had a plausible claims to be President. If you think of nominees between 1972 and 2012, most of them are people who might have won under the old system,” she says. “You used to have to have enough of a national reach to raise a fair amount of money to move around country and meet voters. These days, running a campaign online costs virtually nothing.” 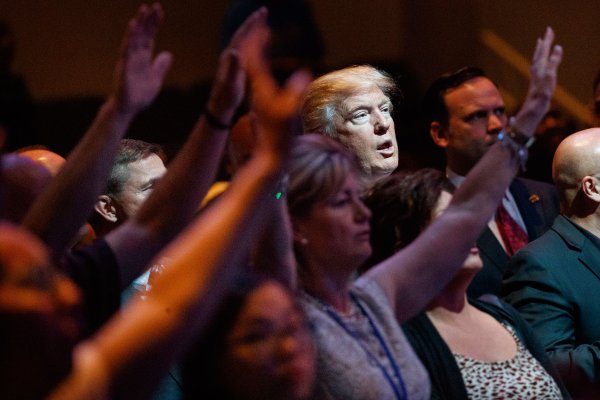 Evangelicals Are Supporting Trump Out of Fear, Not Faith
Next Up: Editor's Pick