Calls to Reform Democratic Nomination Process Have Roots in 1968 Convention

Supporters during the 1968 Democratic National Convention held at the International Amphitheatre in Chicago, Illinois from Aug. 26 to Aug. 29, 1968.
NBC NewsWire/Getty Images
By Katie Reilly

Cries that the system is “rigged” and calls to reform the presidential nomination process have become popular refrains in both major parties this year. Democratic candidate Bernie Sanders strongly criticized the use of superdelegates—elected officials and senior party leaders who get to cast a vote for the Democratic nominee—and Republican Donald Trump denounced members of the GOP establishment who had hoped to change convention rules and stop him from obtaining the nomination.

But, though the details may be very 2016, such arguments follow the precedent set by the Democratic National Convention in 1968, when a party in turmoil enacted reforms that established a lasting standard.

That year, the trajectory of the nomination process was fundamentally changed when Robert Kennedy was assassinated in June 1968, after winning the California primary. Hubert Humphrey, who was then Lyndon B. Johnson’s vice president, hadn’t entered any primary races, having only launched his campaign after Johnson withdrew from the race in late March. But as the incumbent favored by party leaders, Humphrey was suddenly all but assured the nomination over Eugene McCarthy. “Even though he didn’t win a single primary, he became the nominee, so the primary system played no role in who was selected as president,” explains Geoffrey Cowan, now a communications professor at the University of Southern California.

That disconnect spurred demand for a fairer system that better included public input.

Cowan, who was then a law student working for McCarthy’s campaign, played a fundamental role in instituting those reforms, which laid the groundwork for the nomination system in use by the party today. He founded a committee that proposed changes to the delegate selection process that were adopted for the 1972 convention, with the goal of opening the system up for greater public participation.

“A lot of things we take for granted today are the result of the changes that were made that year,” Cowan tells TIME. “The system that, let’s say, Donald Trump and maybe some others call ‘rigged’—it was really rigged before then.”

The new rules prohibited the selection of delegates before the calendar year, mandated that only 10% of delegates could be appointed by the state party committee, required state parties to keep written rules on delegate selection and required women, minorities and young people to be more fairly represented on delegate slates. Together, the changes were intended to bolster public input and limit the control of party leaders in “smoke-filled rooms.”

Applying the same goals to today’s system, Cowan thinks the party should reevaluate the use of superdelegates and caucuses and consider allowing more open primaries. He predicts that the Democratic Party will likely soon dispense with superdelegates. In fact, the Democratic National Convention rules committee voted on Saturday to create a “unity commission” that will consider overhauling the role of superdelegates as part of a complete review of the nominating process, as Politico has reported. Other amendments that would have eliminated the superdelegate system outright were defeated.

Read more: What to Know About Superdelegates in Under 90 Seconds

“If you were now re-examining the question and sort of trying to apply the standards of 1968, I think you would probably not have superdelegates—or if you did, the superdelegates would have to vote the way their state had voted. They wouldn’t be just free agents,” Cowan said. “And caucuses would be called into question on the issue of: did they really allow for full public participation of the people in that state?”

He also thinks the “dizzyingly complex” differences between the electoral systems in different states warrant reform. “They differ from state to state. In some places, they differ from district to district. The two parties are different, and they change every four years,” he said. “No sane person can understand what they have to do to participate in a Democratic process, so I also think there ought to be more standardization of the system today.”

A Washington Post review of Cowan’s 2016 book Let the People Rule noted that if Trump won the nomination—as he did officially last week— “over the strenuous efforts of party elites to derail him, he ought to send a note of thanks to Geoffrey Cowan.” Asked how he feels about that, Cowan, a registered Democrat who led the Voice of America during President Bill Clinton’s administration, said he prefers to answer as a non-partisan political scientist.

“I guess in the end, I still think it is a good thing,” he said. “Whether one favors Trump or not, I think it’s a good thing that there’s a system that’s as open as it can be.” 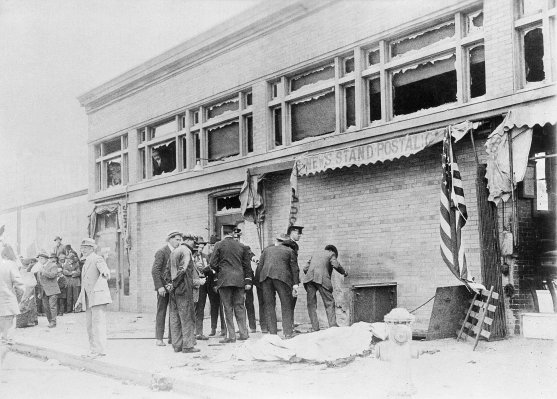 The Bomb That Rocked San Francisco 100 Years Ago
Next Up: Editor's Pick