This Is the Only Way to Tackle the Climate Emergency

Ideas
By Farhana Yamin
Farhana Yamin is an international environmental lawyer and activist with the Extinction Rebellion movement. Over the past three decades, she has co-authored a number of international treaties on climate change, including the Paris climate agreement. She is a contributor to This Is Not a Drill: An Extinction Rebellion Handbook.

At this point in human history we have three choices: to die, to survive or to thrive.

From the wildfires in the U.S., coral die-back in the tropics and the deadly hurricanes battering small islands, the signs are crystal clear: climate devastation is already here. The world’s poorest people and indigenous communities are on the front line. They are also bearing the brunt of the sixth mass extinction, which is under way due to conversion of their forests, wetlands and other wild landscapes into concrete cities, dam reservoirs and fields growing soya.

I joined Extinction Rebellion to fight against the climate and ecological emergency we are now facing – an emergency that threatens the very conditions of all life on Earth. I have been an environmental lawyer for thirty years, working to create new treaties, E.U. agreements and national laws aiming to prevent the situation we now find ourselves in. Sadly, I know this emergency cannot be averted by governments signing weak compacts and voluntary agreements with the biggest polluters on Earth. Nor by tweaking carbon markets that have been gutted of climate ambition by fossil-fuel lobbyists. We need to overhaul our political systems to limit access to government by big business. We need citizens’ assemblies to allow ordinary people to decide the scale and pace of transition on the basis of independent scientific advice.

Normal politics has failed us. It has brought the whole planet to the brink of ecological disaster. We cannot invoke and rely on the inadequate legal tools of the past 30 years that have allowed this crisis to happen. We need everyone to unite – from the left, the right, and every shade in between, and especially young people, many of whom are too disillusioned to vote or are excluded because they are only 16. We need everyone to undertake mass civil disobedience to create a new political reality the whole world over.

But we can’t get there if we work in silos and factions. We need a “movement of movements” to model the unity and urgency we need right now. The new movement of movements must be led by our youth and by those who have been resisting “business as usual,” especially communities of color and those at the forefront of oppression. The new movement must be based on the reality that the legacy of colonialism, combined with current forms of capitalism based on never-ending extractive growth, is literally killing us. The reality is that four environmental defenders a week are being killed in the Global South. We in the Global North need to honor their work and join their struggles by also throwing our own bodies on the line.

We need a socially just transition for everyone on Earth, not just for workers trapped in the toxic industries that need to be phased out, but for everyone at the sharp end of austerity and ecological destruction. Climate and ecological destruction are at heart issues about social and intergenerational justice. We can’t just fixate on the maths and science of climate change and leave people and fairness out of the equation.

These are the facts that justify the unification and intensification of our shared struggles and which will only succeed if we have a worldwide rebellion. Climate-change denialists cannot cover up the fact that the struggle for access to natural resources, especially fresh water and arable land, is intensify- ing, and that large parts of the planet are already becoming uninhabitable due to food and water scarcity.

Farhana Yamin, Extinction Rebellion activist speaks at the Climate emergency protest in Parliament Square outside the Houses of Parliament on May 01, 2019 in London, England.
John Keeble—Getty Images

The world’s insect population has fallen by 60 per cent since the 1970s. Large parts of Europe look green but are ‘biodiversity deserts’ – the birds and bees are dying. Current extinction rates are at least tens, and possibly hundreds, of times greater than background rates, destroying entire eco- systems both on land and in the sea.

Climate change is warming up the atmosphere, oceans are acidifying and the cryosphere – the parts of the world covered in ice – is literally in meltdown. Abrupt, non- linear, irreversible changes are underway in the Arctic, Antarctica, Greenland and the world’s glaciers, which are crucial to food, water and agricultural production.

The human consequences of these changes – economic instability, large- scale involuntary migration, conflict, famine and the collapse of economic and social systems – are plain to see and reported daily, but these stories are not linked in mainstream political and media coverage to the climate and ecological emergency that is already upon us.

Between 2006 and 2011, 60 per cent of Syria suffered the worst long- term drought and crop failures in the country’s history. Two to three million people became poor and many more were internally displaced. The resulting social instability amplified the political factors that led to war in Syria, with now half its original population of 13 million having migrated or been internally displaced. Something similar is occurring in Yemen, where up to 10 million people face starvation, despite millions trying to move to safer, once fertile areas.

The received political wisdom that people in rich countries can sit tight and buy their way out of catastrophic environmental outcomes, or know that the welfare state will save them, is looking more and more fanciful as we remain in the grip of austerity politics. Anyone with an understanding of how the global food system works, especially how much of the world’s food supply passes through less than a dozen ‘choke point’ ports, will know that our economies are deeply intertwined. Everyone will be affected, joining the millions who already are all over the world. Poor communities, especially people of color, whether in the Global North or the Global South, who have always been on the front lines of environmental injustice, will likely also bear the brunt of the new catastrophes.

Climate change activists from the Extinction Rebellion group march up to block the street at Bank in the heart of the City of London financial district in protest that the government is not doing enough to avoid catastrophic climate change and to demand the government take radical action to save the planet, on 25th April 2019 in London, England, United Kingdom.
Mike Kemp—In Pictures via Getty Images

Are humans destined to become extinct as a species? Will we be slugging it out for what little remains by arming our- selves and building walls to keep out those less fortunate than ourselves? Can we really dismantle the toxic systems that have given rise to these gargantuan problems in the short window we now have?

No one knows what will happen, and no one can say for sure whether or not fundamental ecological tipping points have already been breached. The good news is that there are millions of people mobilizing to stop humanity falling off a cliff.

And they also have some sharp new ideas to create kinder, regenerative societies that can start the process of restoring nature and create communities of resistance and resilience to the impacts we cannot avoid. They want to do more than just avoid extinction or merely survive. They are building a movement built on solidarity and well- being so everyone, and every part of everyone, can flourish. Ending domination over nature goes hand in hand with tackling all forms of domination and hierarchy. The struggle for climate justice is also the struggle for racial, gender, sexual and economic equality. We are not alone. Actions are now happening all over the world.

In Ghana, Extinction Rebellion activists recently held an event calling for action on the climate and ecological emergency in Africa. The event was staged in solidarity with those in the Global South and the entire world. ‘The impact of the climate catastrophe is part of our daily life. This is why this event is important,’ says the Ghanaian activist Mawuse Yao Agorkor.

These voices cannot be ignored any longer. This year, Extinction Rebellion has injected a new sense of energy and urgency into the climate movement. Thousands of people have joined, participating in non- violent actions by blocking bridges, blockading roads and shutting down government buildings.

Members of the Extinction Rebellion Youth group locked themselves to the fence of Parliament demanding climate change action on May 3rd 2019 in London, United Kingdom.
Kristian Buus—In Pictures via Getty Images

While media headlines have focused on our work in the United Kingdom, Extinction Rebellion has started an International Solidarity Network to support existing resistance in the majority world, working closely with activists in West Papua, Bangladesh, Mongolia and the Caribbean.

Extinction Rebellion is also linking with and learning from other movements.

At the U.N. Conference on Climate Change, Extinction Rebellion supported the Alliance of Small Island States and the Climate Vulnerable Forum – together representing over 80 countries with 1 billion people. We helped pull together an international ‘emergency coalition’ to reject weak language that would have condemned them to extinction. While we in the Global North might only just be feeling the effects of climate change, the majority world has long since known the tragedy that the climate crisis brings.

Support is also being provided to the youth-led school strike movement started by Greta Thunberg, and to the newly emerging Birthstrike movement which is taking off in many countries to support people who are choosing not to bring children into this world unless, and until, conditions improve. In the U.S., the Sunrise Movement is building bipartisan support for a ten year mobilization and investment plan called the Green New Deal.

What all these movements have in common is a complete rejection of neoliberal economics and ‘business as usual’ politics. Yes, it is too late to prevent all the negative impacts of climate change. But this cannot destroy our capacity to nurture. It cannot destroy our capacity to love and our sense of justice.We can and now must redesign human societies based on love, justice and planetary boundaries so that no person or society is left to face devastating consequences and we learn to restore nature together.

Faced with toxic systems that are destroying all life on Earth, affirmation of this vision and rebelling against whatever gets in its way becomes a sacred duty for all. We can and must succeed in catalyzing a peaceful revolution to end the era of fossil fuels, nature extraction and capitalism.

Life on Earth depends on it.

This is an excerpt from This is Not a Drill: An Extinction Rebellion Handbook, published by Penguin Books. 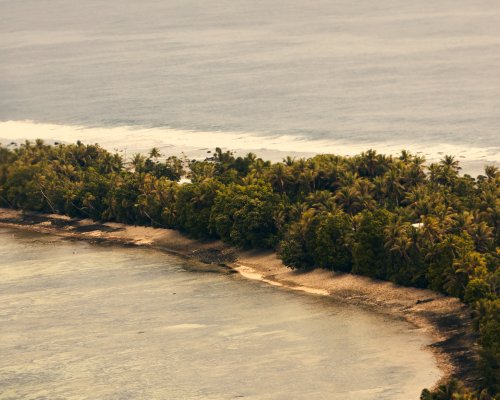 The Leaders of These Sinking Countries Are Fighting to Stop Climate Change. Here's What the Rest of the World Can Learn
Next Up: Editor's Pick