The Mayor Fighting to Save Her Island Home from Climate Change

In January 2018 floods, the sea wall that Australia built to protect the residents of Yam Island collapsed. Residents of the island — just over 1 square mile — which lies off the coast of mainland Australia, waded through the floodwaters as quickly as they could, grabbing whatever belongings they could. But the force of the ocean water dragged most of their bags away. Houses were destroyed, making 16 people homeless.

Floods are common in this part of the world, but they have grown worse. Vonda Malone, the mayor of the Torres Shire Council, says climate change is having a “devastating” effect on locals. “Communities are being submerged.”

The Torres Strait Islands are among the most vulnerable regions to climate change in Australia. Sea levels continue to rise, making tides more destructive, coastal erosion faster and droughts more severe. Buildings, roads and even cemeteries have been washed away.

More than 200 Islands make up the Torres Strait, a body of water separating the Australia’s far northern Cape York Peninsula and the southern coast of Papua New Guinea. The Torres Shire council governs the Thursday Island group – the administrative hub of the Torres Strait – while the greater region sits within Torres Island Regional Council’s jurisdiction, governed by mayor Fred Gela. The Islanders are one of Australia’s two distinct indigenous cultural groups, the other being the aboriginal people. About 4,000 Islanders live on the 18 habitable Islands, and 42,000 members of the Islander community live outside the area, mostly in the north of Queensland. The Torres Strait Islander people speak traditional languages: Meriam Mir, mostly spoken in the Eastern Islands, and Kala Lagaw Ya, which is more prevalent in the Western Central and Inner Islands. The community have lived on the Islands for an estimated 2,500 years.

Fast-rising sea levels are not just a concern for the Islanders—they’re a global threat. NASA estimates that sea levels will rise between 30 inches and 60 inches by the end of the century. Eight of the world’s 10 largest cities are located by a coast, including Tokyo, Mumbai and New York City. Almost 40 percent of Americans live in relatively high-population-density coastal areas, where rising sea levels are causing flooding and the erosion of the shoreline. But in the Torres Strait Islands sea levels are rising by 0.2 inches each year — double the worldwide average, according to the Torres Strait Regional Authority (TSRA). A 20-inch rise could increase the chance of flooding on the Australian mainland by 300 times, according to the Australian Department of Environment and Energy.

Malone, a native of Thursday Island — the central hub of the Torres Strait Islands — was elected in October 2016, becoming the region’s first indigenous, female mayor. She says the Australian government applies “sweeping national policies” rather than considering the “unique needs” of these remote islands, threatened by an encroaching ocean. “Politicians need to work more closely with Islanders to recognize and accommodate for our differences,” says Malone, who has worked in government for more than two decades. There are vast health, social and economic inequalities between indigenous and non-indigenous Australians, including shorter life expectancy, higher rates of infant mortality, greater rates of mental health disorders, and lower levels of education and employment. Access to clean water is one of the “gravest” concerns for islanders, says Malone. Wells are increasingly unusable because rising sea levels have led to the contamination of ground-water.

“The Torres Strait authorities have been advocating for more support from the government for over 20 years to make our communities more resilient against climate change. But we still need more resources,” Malone says.

Especially at risk are the approximately 1,500 people living on the northwestern islands of Boigu and Saibai, and the central islands of Masig, Poruma, Warraber and Yam. Parts of these islands are less than one meter above sea level and communities are located a few meters from the beach.

Pat Simons, spokesperson for environmental NGO Friends of the Earth from Melbourne in Australia, has echoed Malone’s call to action. After the release of a report in October 2018 revealing the severe impacts of global warming, he said “All levels of government must do a heavier lift than the community when it comes to tackling climate change.”

Islanders have been sounding the alarm for years. In 2014, they celebrated when, the Federal and Queensland governments finally pledged AUS$26.2 million for the installation of coastal defenses in six Torres Strait communities across the most vulnerable islands, amid fears that the entire community of 350 people would need to be relocated.

But six months after those defenses were built in 2017, strong tides began to break through the wall on Boigu Island, a 3-mile-wide island home to approximately 260 people. Dennis Gibumam, an elder from Boigu Island, told The Guardian “When the high tide and strong winds come together, it breaks. We pray we don’t lose our homes. We don’t want to leave this place.” Seawalls cannot protect communities from flooding, said Helen Szoke, the Chief Executive Oxfam Australia.

Earlier climate change adaptation plans advocated the Islanders’ relocation from the coast, but local government often ended up rejecting such recommendations, instead commissioning the construction of small local seawalls in areas at risk of erosion, wrote Mark Gibbs, a director at the Queensland University Of Technology. “These plans typically lack monitoring and evaluation and a realistic implementation strategy,” he said. Other more “sophisticated” options include making existing structures less vulnerable by repurposing them.

Jensen Warusam, from Saibai Island, on his boat in the Torres Strait.
Fairfax Media — Getty Images

Climate change also threatens the Islanders’ culture and way of life. Getano Bann, a 55 year-old musician born in Australia’s east coast city of Mackay, says the Central Torres Strait says the islands “represent belief systems and cultural practices that have been part of our people since time immemorial.” Bann, whose family comes from the Yam Island, says the land itself “holds stories about our ancestors” who were buried there. “How do you replace people’s sense of identity by moving them to higher ground?” Bann asks.

Sea levels in the Torres Strait are projected to increase by 30 inches over the next 100 years according to the Intergovernmental Panel on Climate Change, a Geneva-based U.N. body that provides regular assessments of the scientific basis of climate change, its impacts and future risks. That’s a conservative estimate — and still one that would lead to the loss of marine industries, increased physical and mental health issues. It could even cause the complete submersion of some islands which would mean an enormous loss of culture.

The longer term challenges, including eventually relocating are extremely disturbing” for communities who have a deep connection to their islands,” said Szoke. Yet for most islanders, Malone says leaving the Torres Strait remains a “last resort.” 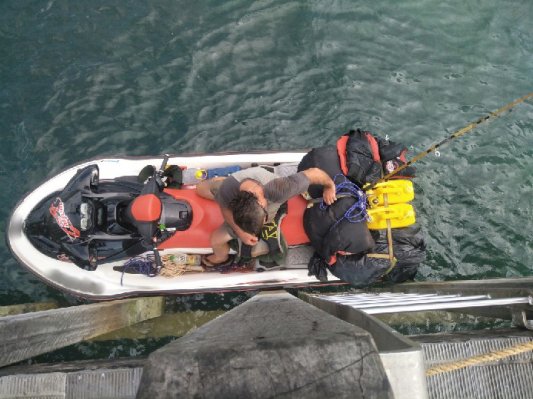 Fugitive Trying to Flee Australia on Jet Ski Almost Made It
Next Up: Editor's Pick