Members of Congress have reintroduced a bill defending Hong Kong’s autonomy in the wake of violent protests over a controversial proposal to amend the city’s extradition law that would allow the transfer of suspects to mainland China.

The bipartisan Hong Kong Human Rights and Democracy Act, co-sponsored by U.S. Senators and members of the House, “reaffirms U.S. commitment to democracy, human rights, and the rule of law at a time when these freedoms and Hong Kong’s autonomy are being eroded,” according to a press release.

The legislation would require an annual assessment of Hong Kong’s political autonomy to determine whether it still qualifies for special trade status with the U.S. It would also threaten sanctions and travel restrictions against individuals found to be involved in disappearances in the semiautonomous region.

“We introduce this legislation today because democracy and freedom are under assault in Hong Kong,” U.S. Representative Jim McGovern said in the press release.

Hong Kong has been rocked by protests since June 9, when an estimated one million people took to the streets in opposition to the proposed extradition bill. Critics say it represents a further erosion of the city’s freedoms and would allow China to round up opponents to face trial on the mainland, where justice is opaque.

The former British colony was handed over to Chinese sovereignty in 1997 under an agreement called “one country, two systems,” which guaranteed that its political system would remain unchanged for 50 years. The city enjoys political and social freedoms that don’t exist elsewhere in China, but those freedoms have come under increasing threat by Beijing.

Organizers estimated that more than a million people turned up for the march on Sunday, which would make it the biggest demonstration in the city’s history. Tens of thousands returned to the Hong Kong legislature Wednesday for a protest that postponed debate on the controversial bill descended into violence later in the day, as police fired tear gas and rubber bullets into the crowds of mostly young people.

Extradition is just the latest flashpoint in the city as Beijing has sought greater influence in recent years, attempting with varying degrees of success to exert control over Hong Kong’s national security, education and electoral framework.

“It is in everyone’s interest that Hong Kong remain a free and prosperous bridge between China and the world,” McGovern said.

“But if Beijing intends to force Hong Kong into becoming just another mainland Chinese city under authoritarian rule,” he added, “we must reevaluate whether Hong Kong warrants the special status granted under U.S. law.” 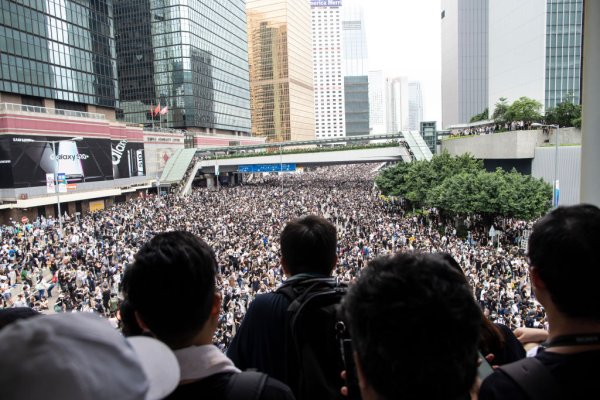 Hong Kong Protesters Call for Even Bigger March
Next Up: Editor's Pick