50 Years After Watts: The Causes of a Riot

It was Aug. 11, 1965, that Los Angeles police officer Lee Minikus tried to arrest Marquette Frye for driving drunk in the city’s Watts neighborhood—an event that led to one of the most infamous race riots in American history. By the time the week was over, nearly three dozen people were dead. TIME’s coverage from those incendiary days offers insight into why Watts erupted–and lessons for the current charged moment in America.

Fifty years ago, Watts was a potent combination of segregation, unemployment and racial tension. Though legally integrated, 99% of students at the high school that served Watts were black, and the school—like many of the services available to the neighborhood—was not serving them well. “Watts is the kind of community that cries out for urban renewal, poverty programs, job training. Almost anything would help. Two-thirds of its residents have less than a high school education; one-eighth of them are technically illiterate,” TIME noted in a cover story about the riots. “Only 13% of the homes have been built since 1939—the rest are decaying and dilapidated.”

Jobs, meanwhile, were scarce. The federal government’s Office of Economic Opportunity, run by John F. Kennedy’s brother-in-law Sargent Shriver, called out Los Angeles mayor Sam Yorty for running the only major city in the United States without an anti-poverty program, and for being one of only two big city mayors to refuse a confidential offer of federal money meant for job programs. TIME credited a federal program that created 4,000 jobs for helping keep Harlem calm that summer, despite unrest the year before. Yorty, in turn, accused Shriver’s agency of withholding funds.

Nor were tensions calmed by police, as TIME’s piece a week later —headlined “Who’s to Blame?”—made clear. L.A. police chief William Parker was a divisive figure who compared Watts rioters to “monkeys in a zoo.” Martin Luther King Jr. was quoted as saying that in Watts “[there] is a unanimous feeling that there has been police brutality” despite the fact that a 1962 Civil Rights Commission investigation was unable to pin down specific instances.

Seeking to explain the underlying causes of the riots as they were happening, TIME surveyed leading civil rights figures of the day. The magazine found most shared a common sentiment—one that may be familiar to current readers. “I think the real cause is that Negro youth—jobless, hopeless—does not feel a part of American society,” said movement leader Bayard Rustin. “The major job we have is to find them work, decent housing, education, training, so they can feel a part of the structure. People who feel a part of the structure do not attack it.”

Read more from 1965, here in the TIME Vault: Trigger of Hate 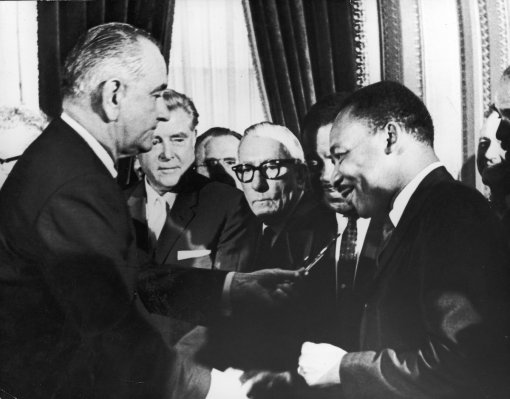 The Voting Rights Act at 50: How the Law Came to Be
Next Up: Editor's Pick