The center of one of the densest metropolises in the world fell momentarily quiet Tuesday night, as well over a hundred thousand people gathered in Hong Kong’s Victoria Park bowed their heads and held flickering candles to observe a minute of silence commemorating the bloodshed around Beijing’s Tiananmen Square on June 4, 1989.

For the last 30 years, Hong Kongers have held an annual march and candlelight vigil to remind the world of the night the Communist Party unleashed its tanks in response to protesters calling for political change. No one knows how many died — the official count is a secret — but it’s widely believed that hundreds if not thousands were slaughtered as soldiers moved to crush the seven-week democracy movement.

The Tiananmen Square massacre forever changed China, and, arguably, the world. But three decades later, the anniversary remains taboo on the mainland, an event off-limits to nearly one-fifth of the planet. Today, semi-autonomous Hong Kong is the only place on Chinese soil that can openly stage large-scale memorials.

“You are not here anymore but you continue to live through every single candle in Victoria park,” Chow Hang-tung, one of the event’s organizers and vice chairman of the pro-Democracy Hong Kong Alliance, said in a eulogy to the victims before an audience filling the park with dim, wavering light. “Through every anti-establishment activity we hold, through the hearts of those who fight for democracy, you will live on.”

Pro-democracy protesters hold candles on stage during a vigil in Hong Kong on June 4, 2019, to mark the 30th anniversary of the 1989 Tiananmen crackdown in Beijing.
Isaac Lawrence—AFP/Getty Images

Hong Kong still exercises many freedoms unimaginable on the mainland, but these practices have slowly ebbed under the gravitational force of Beijing. Many wonder how long the Communist Party will continue to tolerate publicly defiant acts like the park’s massive vigil. Despite spitting weather and a government warning about thunderstorms issued just ahead of the event, Hong Kongers young and old crammed into the park for the emotionally charged vigil. Organizers estimate that more than 180,000 people joined this year; the 30th anniversary brought some who had never previously attended, in addition to those who reliably turn up every year.

Candy Chan, 35, has attended the vigil every year for the past decade. She is native to Hong Kong, and was only a child when the Tiananmen protests took place, but she feels it’s important to keep the memory alive by exercising her right to commemorate and teaching her daughter about the past. “Hong Kong is the only place [in China] to express freedom,” she tells TIME. “If no one comes out, youngsters will forget this incident.”

Joyce Dang, a civil servant who is also from Hong Kong, remembers following the news reports closely in 1989. She was in college at the time, and recalls feeling shocked and unable to sleep. “For those of us who experienced the event, the memories cannot be erased,” she says, but she worries that the freedom to publicly honor the memory in Hong Kong may not always be guaranteed.

This year’s anniversary took on additional significance in Hong Kong. Fears are running high over proposed revisions to an extradition law that would make it easier for criminal suspects to face trial on the mainland. Critics say the changes will erode the independence of the city’s once-robust legal system, and aid Beijing in targeting political foes. The threat of having to face retribution on the mainland could also have a chilling effect, and silence the full-throated criticisms of the Communist regime that frequently ring out at protests.

John Tsui, a member of the League of Social Democrats political party, likened passing the law to “essentially putting a knife over the heads of everyone in Hong Kong,” claiming it was designed as a means of “restricting the freedom of speech in Hong Kong and freedom to protest, basically anything Beijing doesn’t like.”

“It is going to be used to target anyone not to the PRCs liking,” he tells TIME.

Hong Kong has long been a safe harbor for polarizing political figures, from Sun Yat-Sen and his revolutionaries to Vietnam’s communist leader Ho Chi Minh to American whistle-blower Edward Snowden. During the heady days of idealism that preceded the Tiananmen crackdown, Hong Kong raised funds for the pro-democracy protests. After Beijing began rounding up protest ringleaders, city activists successfully smuggled out more than 400 in a covert effort known as “Operation Yellowbird.”

The city’s reputation as a place of refuge has already diminished after it returned to Chinese sovereignty in 1997. If the extradition law is passed, as is likely in the coming weeks, it could erase “the firewall between Hong Kong and the mainland,” says Albert Ho, chair of the Hong Kong Alliance in Support of Patriotic Democratic Movements of China, which helped orchestrate Operation Yellowbird and now runs the annual Tiananmen vigil.

At the time of the Tiananmen massacre, Hong Kong, then a British colony, saw the gunfire and feared for its future under Chinese rule. According to the 1997 handover terms, Beijing agreed to maintain the city’s autonomy for 50 years under a governing arrangement known as “one country, two systems.” But Beijing’s perceived interference in the city’s political affairs, from the election of the city’s chief executive to the banning of political parties that run afoul of the Communist government, has raised doubts that the deal will hold and deep concerns about what will happen when it expires.

More than two decades after the Union Jack came down, Hong Kong is a city stewing in political disenchantment after its own homegrown democracy movement failed to sway Beijing. The 2014 Umbrella Revolution choked major thoroughfares in the financial hub for 79 days and posed the greatest challenge to Beijing’s authority since Tiananmen, but ultimately, it did not win any major concessions.

Pro-democracy protesters face police forces during clashes at a pro-democracy rally in the Admiralty district of Hong Kong on Nov. 30, 2014.
Philippe Lopez—AFP/Getty Images

Recent events have reinforced fears of Beijing’s tightening grasp. The expulsion of a foreign journalist for hosting a politically charged talk, two Hong Kong activists being granted asylum overseas, and a law that would criminalize disrespecting the national anthem have all stoked a sense of what some might call political apathy, while others see it as pragmatism. Others simply grew up living a life divorced from politics.

Daisy Lee, an 18-year-old recent high school graduate, said what happened at Tiananmen is now “in the past.” Like some other pedestrians mixed in with the masses moving slowly through the busy Causeway Bay neighborhood toward Victoria Park, she said she was just here to do some shopping with a friend and got caught up in the crowd. “We don’t care about it, it doesn’t affect us,” Lee tells TIME, annoyed by the crowds. “I think it’s too many people, I don’t like it.”

Even among the city’s pro-democracy faction the Tiananmen anniversary creates friction. Some see Hong Kong as linguistically and culturally distinct from the mainland, and advocate for focusing on local issues rather than meddling in the history and political sensitivities across the border.

During this year’s anniversary, several student unions decided to revive a forum on the future of Hong Kong instead of participating in the yearly vigil.

Others, including many of the former student campaigners who led the charge during the Umbrella Revolution, see a moral compunction in taking part in the vigil. Even though they were born after Tiananmen, they too are familiar with the consequences of resisting Beijing.

Dozens of activists have been convicted for their role in the struggle for democracy in Hong Kong. During last year’s anniversary, Joshua Wong, the student activist who shot to international fame during the 2014 protests, stressed the importance of remembering June 4th. This year, he is once again behind bars.

The massive turnout for the Tuesday night vigil suggests that the struggle — at least this corner of China — may be tarnished, but is certainly not forgotten. Crowds burst into impassioned chants of “We want justice!” and “Let’s build a democratic China!” Singers sang, and survivors spoke.

Liane Li wasn’t even supposed to be in Beijing on June 4th, she tells the attentive crowd. She was just a college student in Hong Kong when she heard about the movement for Democracy that was swelling in cities across China, so she went to Beijing at the height of the protests to show her solidarity. She said she was warned that authorities would soon clear the square. “But we were in alliance with the Beijing students that were fighting so hard for democracy,” she said, “so we went ahead anyway.”

It wasn’t long before she heard the guns begin to fire; soon there were wounded people everywhere. A medic approached her and told her to flee, begging her to spread the word about the horrors she saw. “Go get help, go home to Hong Kong,” she recalled the woman pleading. “Tell the world what our government is doing.” 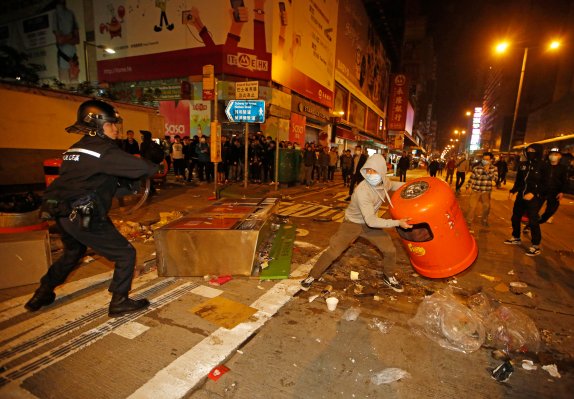