Demonstrators, holding a banner that reads "Freedom of the press is not allowed to be trampled" and "Shame on the government's vindictive move," approach a symbolic "political red line" during a protest after Hong Kong immigration authorities declined a visa renewal for senior Financial Times journalist Victor Mallet, in Hong Kong on October 6, 2018.
PHILIP FONG—AFP/Getty Images
Ideas
By Jeffrey Ngo

Jeffrey Ngo, chief researcher for Demosistō, is currently pursuing his Ph.D. in History at Georgetown University.

Shortly after Mao Zedong’s Communists triumphed over the Chinese Nationalist government in 1949, the Foreign Correspondents’ Club (FCC), established six years before in the southwestern city of Chongqing, decided it needed to relocate. It found a new home in a place that—boasting stability, the rule of law, and a guarantee of civil liberties—was very friendly to the international media: Hong Kong. Most China-based media bureaus soon followed suit. For almost the next seven decades, the FCC expanded, without interference, as an institution that facilitated the work of journalists from around the world at the heart of Asia’s financial center and champion of press freedom. Until now.

Earlier this month, Victor Mallet, a British national who serves as the Financial Times Asia news editor, was denied a renewal of his Hong Kong work visa without any explanation. As far as we are aware, this marks the first time that a member of the press has been expelled from the former British colony, whether before or after the territory’s handover to Chinese sovereignty in 1997. The incident tarnishes Hong Kong’s long-held reputation as a bastion of freedom of expression.

As the FCC’s acting president, Mallet chaired a talk on Aug. 14 by Andy Chan, founder of the pro-independence Hong Kong National Party (HKNP). The local government, acting on pressure from Beijing, was moving to dissolve the HKNP at the time, because Hong Kong separatism is an issue President Xi Jinping has identified as a “red line” that must not be crossed.

The Chinese Foreign Ministry attempted to persuade the FCC to cancel the event, but Mallet adamantly stood his ground. “Hosting such event does not mean that we at the FCC either endorse or oppose the views of our speakers,” he said in his opening remarks, arguing that it was the “professional responsibility” of journalists “to hear the views of different sides in any debate.”

When pressed by reporters on Mallet’s expulsion, Hong Kong’s leader, Chief Executive Carrie Lam stated that the local Immigration Department called the shots and did not discuss individual cases. She dismissed as “pure speculation” any link between this verdict and his chairing of Chan’s talk. But make no mistake: banishing Mallet is Beijing’s payback for precisely that. It is part of Xi Jinping’s sweeping crackdown on separatism, be it in Hong Kong, Tibet or the northwestern region of Xinjiang, where up to a million Muslim Uighurs have been arbitrarily detained. That both Mallet and the Financial Times don’t support Hong Kong independence is deemed irrelevant. As Jeremy Hunt, the British Foreign Secretary, rightly concluded, this was a “politically motivated” move that warranted reconsideration.

Revoking work visas is a common punishment Beijing imposes on journalists who have infuriated the regime by writing politically sensitive stories. The China bureau chief for Buzzfeed News, Megha Rajagopalan, was booted this summer following her award-winning coverage on the disturbing mass incarceration of Uighurs in Xinjiang, in conditions similar to the 2015 ouster of Ursula Gauthier, a French reporter for L’Obs. Now the censorship tactic “has extended to Hong Kong,” Sen. Marco Rubio observed last week — with reference to Mallet — at a press conference to release the Congressional-Executive Commission on China’s 2018 report, which highlights the latest deterioration of Hong Kong’s press freedom.

In this photo taken on August 14, 2018, Victor Mallet, a Financial Times journalist and vice president of the Foreign Correspondents' Club (FCC), speaks during a luncheon at the FCC in Hong Kong, during which Andy Chan, founder of the Hong Kong National Party, gave a talk.
PAUL YEUNG—AFP/Getty Images

When Chris Buckley of the New York Times was forced out of China back in 2012 — in retaliation for the paper’s damning investigation into the wealth of top Chinese communist officials — he and his family went south to Hong Kong. Likewise, Buckley’s colleague (and former TIME writer) Austin Ramzy is currently based in the city after Beijing removed him four years ago. This former British colony has traditionally been a safe haven for journalists expelled from China, which makes it all the more ironic and depressing now that it’s beginning to expel journalists at the Chinese government’s behest.

Mallet’s expulsion is thus a big deal, and comes at a time when headlines announce China’s increasing micromanagement of the territory’s affairs on an almost daily basis. On Sept. 24, a month after Chan had delivered his speech at the FCC, his party was officially outlawed on “national security” grounds. Last Wednesday, Chief Executive Lam unveiled in her annual policy address yet another tremendously unpopular Beijing-backed infrastructure enterprise: a 4,200-acre project to build artificial islands, at the whopping cost of $63 billion, that many believe is designed to drain Hong Kong’s treasury and blur its boundary with China.

Just two days later, on Oct. 12, the Lam administration barred Lau Siu-lai, an opposition politician, from appearing on the ballot in upcoming legislative by-election. First elected in the summer of 2016, Lau, at her inauguration, read her oath of office extremely slowly as a gesture of protest at the unrepresentative nature of Hong Kong ‘s political system, becoming one of six lawmakers sacked for similar stunts. Now she can’t run to retake her own seat because she is an advocate of self-determination for Hong Kong, which the local government considers in contravention of the constitution that all Hong Kong lawmakers are pledged to uphold. The same argument was used in January to rule against the candidacy of our party’s Agnes Chow, even though neither Chow nor Lau — much less Mallet — have ever been part of the independence movement.

All these recent instances that undermine autonomy in Hong Kong should alarm the global community, which has a responsibility to act. Already, Hunt has suggested that the Mallet case is a blatant violation of the 1984 Sino-British Joint Declaration — a binding international treaty that governed the transfer of Hong Kong’s sovereignty — and the government of Prime Minister Theresa May ought to hold Beijing accountable for its rogue behavior. Likewise, the U.S. Congress would do well to consider the earliest possible passage of the bipartisan Hong Kong Human Rights and Democracy Act, which would show the world that despite President Donald Trump’s isolationist, “America First” rhetoric, Washington is still committed to upholding universal values. 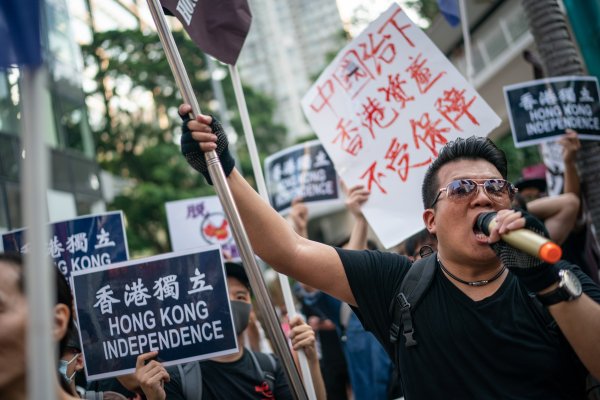