If you haven’t watched the final episode of Game of Thrones’ finale, you missed one of the most important touchstones of modern pop culture this year so far.

HBO released a behind-the-scenes documentary, The Last Watch, which aired on Sunday, which gave fans a glimpse of the making of Game of Thrones and if you think you were shocked by Jon Snow’s actions, you were way less surprised than Kit Harington. Out of all the footage included in the documentary, this moment really stood out. The documentary included the cast’s table reads of the series finale, and gave fans a glimpse of the emotional moment when Kit Harington learned that his character Jon Snow would kill Daenerys, his queen, lover, and aunt, in order to save the realm.

Harington told Entertainment Weekly that he purposely didn’t read the script ahead of time so that he could learn the story’s resolution alongside his cast mates. Or in Game of Thrones parlance, Jon Snow truly knew nothing about the dramatic twist his story was about to take.

The result was a very natural—and very relatable—reaction to the story arc. “I was very shocked and surprised at certain events unfolding and then I blubbed my eyes out,” Harington told Stephen Colbert during a Late Show appearance earlier this month. Thanks to the documentary, fans got to see that blubbing for themselves. Now, that very relatable reaction has spread across the internet as people relive their own experience watching the show’s finale:

Of course, it wasn’t just Harington in the scene and Emilia Clarke, who plays Daenerys, had an equally perfect reaction. As did Sophie Turner who plays Jon Snow’s sister Sansa Stark laughing at his waterworks which was incredibly sibling-like as befits a method actor. 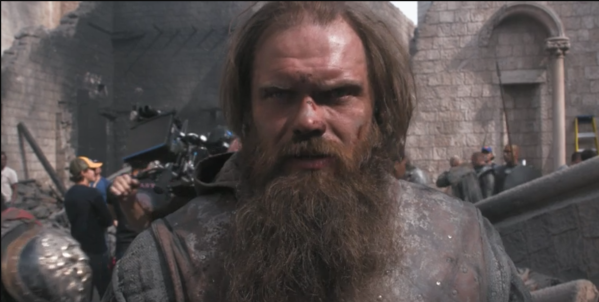 Everyone's New Favorite Game of Thrones Obsession Is a Battle-Tested Extra
Next Up: Editor's Pick