Throughout Game of Thrones‘ eight-season run, many fans have had the same question: “who will sit on the Iron Throne in the end?”

When Thrones began, we learned that King Robert Baratheon had ruled the Seven Kingdoms since Robert’s Rebellion ended Aerys II “The Mad King” Targaryen’s reign 17 years earlier. Since then, we saw Joffrey Baratheon, Tommen Baratheon and Cersei Lannister ascend the Iron Throne while countless others — including Daenerys Targaryen, Stannis Baratheon and Balon Greyjoy — all proclaimed themselves the rightful heir.

But in terms of actual birthright, it was Jon Snow — a.k.a. Aegon Targaryen, the trueborn son of Rhaegar Targaryen and Lyanna Stark — who had the greatest claim to the throne.

Jon had made it perfectly clear that he had no desire to be king, but in the Game of Thrones series finale, he was nonetheless forced to kill Daenerys to prevent yet another tyrant from taking over the realm. As Cersei told Ned Stark in season 1, “When you play the game of thrones, you win or you die.”

Here’s who won the throne once Daenerys was dead.

Who won the throne?

After Jon Snow killed Daenerys Targaryen in the Game of Thrones series finale, he was once again exiled to the Wall to live out the rest of his life as a brother in the Night’s Watch. It was left up to a council of the lords and ladies of Westeros to decide who would rule over the realm. However, since Drogon had destroyed the Iron Throne in a blast of fiery grief, no ruler would ever again sit on top of the thousand blades of Aegon’s enemies.

Because there was no one with a birthright claim to the throne left, Samwell Tarly proposed that they let everyone in Westeros vote to choose their next ruler. However, once that idea had been laughed out of the Dragonpit, Tyrion chimed in to suggest that they narrow the selection committee down to just the nobles.

It was then decided that Bran Stark, a.k.a. Bran the Broken, would be the new King of the Six Kingdoms — Sansa insisted that the North still remain an independent kingdom and was subsequently named Queen in the North.

“What unites people? Armies? Gold? Flags? Stories.” Tyrion mused while campaigning for Bran. “There’s nothing in the world more powerful than a good story. Nothing can stop it. No enemy can defeat it. And who has a better story than Bran the Broken? The boy who fell from a high tower and lived. He knew he’d never walk again, so he learned to fly. He crossed beyond the Wall, a crippled boy, and became the Three-Eyed Raven. He is our memory, the keeper of all our stories. The wars, weddings, births, massacres, famines. Our triumphs. Our defeats. Our past. Who better to lead us into the future?”

Here’s why Bran sitting on the throne is so significant

Bran Stark being voted in as the new king of the Six Kingdoms marked the first time in Westerosi history that a somewhat democratic system was used to select the ruler of the realm. And just as Daenerys had promised to do in season 6, the selection broke the wheel of tyranny and oppression that had long crushed the common people of Westeros beneath its spokes.

Bran ending up on the throne also lends credence to the theory that the history of Westeros is cyclical, something that Thrones has seemed to signal throughout its run.

George R. R. Martin has also appeared to hint at this in his A Song of Ice and Fire book series. In A Game of Thrones, Martin gives Bran an inner monologue in which he remembers a story that his nurse, Old Nan, told him about Bran the Builder, the founder of House Stark.

Not to mention that HBO previously fanned the flames of theory that history was (literally) doomed to repeat itself when it showed Bran the Builder being carried around on a platform — indicating he may have been paralyzed just like Bran Stark — in an extra about the history of Westeros on the Game of Thrones DVD box set.

However, Bran sitting on the throne was not an ending that satisfied all fans. To many, Bran was an unlikely candidate to end up on the throne as it seemed like his role as the Three-Eyed Raven would keep him busy enough as it was. Others felt that the importance of Jon’s true parentage had been thrown under the carpet.

“Just so I understand, Jon Snow is the true and the rightful heir to the throne BUT is sent to the wall,” one viewer tweeted. “On the other hand, Bran could have saved millions of innocent lives but didn’t AND still is fit to be a king? Wait what?!”

However, Bran himself apparently knew that he was always destined to become king. “I ask you now, if we choose you, will you wear the crown?” Tyrion questioned him.

“Why do you think I came all this way?” Bran responded. 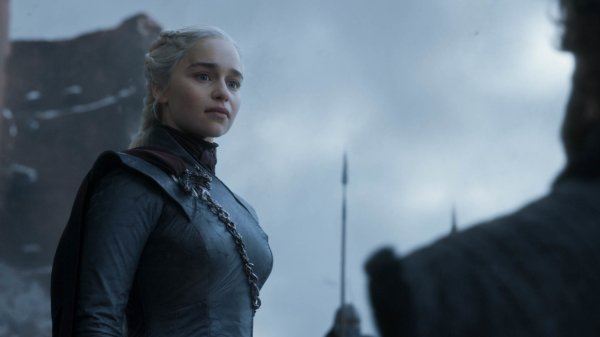 Game of Thrones Had an Opportunity With Daenerys Targaryen. The Show Squandered It
Next Up: Editor's Pick