Just a few days after the birth of his son, Prince Harry is back to work.

The new father left his newborn royal baby boy Archie and wife Meghan Markle for a day trip that was for a very good cause— promoting the Invictus Games, a Paralympic-style event for veterans and serving armed forces members who have been injured or wounded. It’s one of Harry’s favorite causes, and probably one of the few events that could get him to leave his family for the day.

The Duke of Sussex arrived at the Hague early Thursday morning to help raise awareness for the upcoming fifth annual Invictus Games, which will be held in the Netherlands from May 9 through May 16, 2020.

According to People, Harry spent the day meeting potential competitors and their families and hearing about the preparations that were already underway for next year’s event.

Harry was originally scheduled to be in Amsterdam on Wednesday, but he instead he arranged his plans in light of his new son, Archie Harrison Mountbatten-Windsor and introducing the newborn to his great grandmother, The Queen at Windsor Castle.

To acknowledge the fact that Prince Harry had a new job in addition to the Invictus Games, the organizers presented him with a present—an Invictus Games onesie—which paired perfectly with the jacket he wore that said, “I am Daddy”. 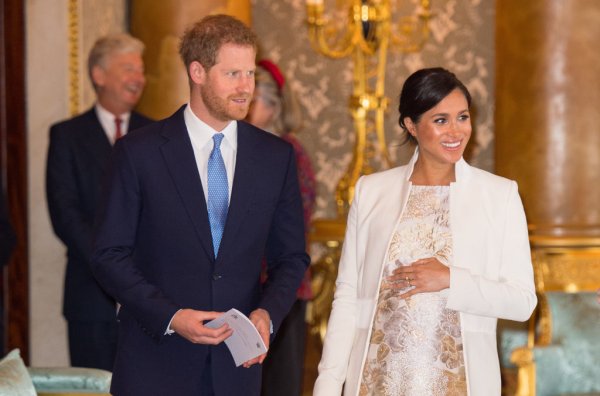 Royal Baby Archie Has a Different Last Name Than His Father, Prince Harry. Here's Why
Next Up: Editor's Pick