Coni Sanders knows as well as anyone that her state has seen more than its share of gun-related tragedies. Her father, Dave Sanders, was the teacher killed during the 1999 Columbine High School shooting. “I don’t know what it is about Colorado,” she says.

The state has seen a number of attacks in the 20 years since Columbine. There was the 2012 Aurora movie theater shooting, then the shooting at Arapahoe High School in 2013, and the “ambush” of police officers in Highlands Ranch in 2017. On Tuesday, another tragedy at the K-12 STEM School Highlands Ranch joined the list. One student was killed trying to stop one of two students who allegedly staged an attack on the campus, eight others were injured.

Sanders and other members of the community affected by the Columbine shooting say they’re are angry and sad, but not surprised, that there has been a school shooting less than eight miles from Columbine High. While some advocate for mental health treatment and increased gun control, community members say there are no easy solutions for the underlying problems that lead to shootings. The motive for Tuesday’s shooting remains unclear.

Sanders says that she’s heard a lot of explanations as to why there appear to have been so many shootings in Colorado — including the high altitude and the transient population. However, she’s dedicated her life to fighting one problem: mental health issues. In the years since her father was killed, Sanders has become a forensic therapist who works with violent offenders and shooting victims.

Sanders believes that the shootings are, in part, the price society pays for providing inadequate access to mental health treatment for people who are mentally ill or have injuries to their mental health.

“We’ve got a lot of mentally ill people in our society and we’re not addressing it,” Sanders says. For people who are desperate, she says, violence can begin to seem like a viable option to draw attention to their suffering.

“It’s become normalized for people to see things like school shootings as a solution to how they’re feeling,” Sanders says.

Tom Mauser, the father of 15-year-old Columbine victim Daniel Mauser, is an advocate for gun safety laws. However, he argues that a major part of the problem is the way American society operates.

“We’re not a society that intervenes in lives very well,” Mauser says. “It’s an issue of how people deal with people. You can’t legislate that.”

Heather Martin, who was a 17-year-old senior at Columbine on the day of the shooting, is the co-founder of the Rebels Project, a nonprofit providing outreach to people who have survived similar attacks.

Martin says that while mental health services and gun control are important components of reducing gun violence, it’s harder to combat what she describes as “really deep problems with society.”

Martin says that in her experience, shootings can send shock waves through a victim’s entire life.

“It’s just overwhelmingly sad, because the event itself is just the beginning,” says Martin. She said that while victims often feel numb right after a shooting, the real struggle may start a year later. That’s when people develop, she says, a sense of “resignation that this is your life now, that you’re changed.”

Sanders says that shootings have become such an entrenched part of her life that she doesn’t even need to wait to hear about them on the news any more.

“I know when there’s a shooting not because I hear it on the news, but because my phone starts blowing up with people saying, ‘I love you. Don’t look at the news. Take care of you today. Where are your kids?’” 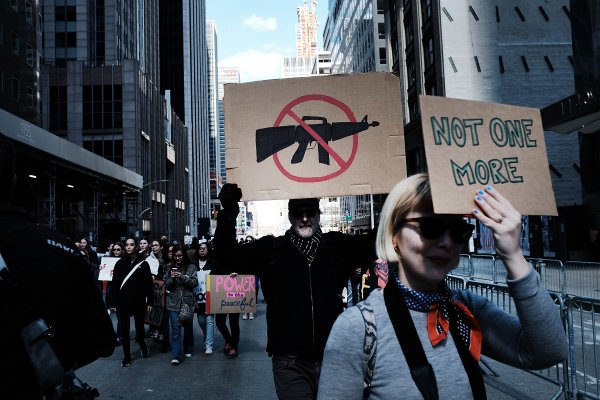 What Gun Control Advocates Should Learn from the NRA
Next Up: Editor's Pick