Throughout the course of Game of Thrones, Theon has struggled to decide whether his loyalties lie with his blood, the Greyjoys, or the family who raised him, the Starks.

This inner conflict led him down the path to ruin when he chose to betray Robb by wresting control of Winterfell from Bran during the War of the Five Kings and then burned the bodies of two orphans beyond recognition to disguise them as Bran and Rickon after the Stark boys escaped with Osha. Of course, Theon ultimately got his comeuppance — if you can call it that — when he was taken captive and horrifically tortured for years by Ramsay Bolton. But ever since he helped Sansa escape Ramsay’s clutches in the season 5 finale, Theon has been working toward redemption.

So when Theon made it back to Winterfell in the second episode of season 8, it seemed like it may be time for his story to finally come full circle.

During an audience with Daenerys and Sansa, he reveals that his sister Yara is sailing to the Iron Islands to take them back in Daenerys’ name. He then bends the knee. After Dany questions why he didn’t go with Yara, he reveals that he stayed to help Sansa: “I want to fight for Winterfell, Lady Sansa. If you’ll have me.” The pair embraces.

A homecoming for Theon on Game of Thrones
Helen Sloan/HBO

Following his emotional reunion with Sansa, Theon volunteered to do his part in the coming battle by protecting Bran in the godswood as he serves as bait for the Night King: “I took this castle from you. Let me defend you now.” Jon nods, and Sansa looks on gratefully as battle plans continue.

If Theon does end up sacrificing himself to save Bran — or another one of the Starks — in the war against the dead, it seems like that may finally give him the closure he needs to forgive himself for his past deeds. 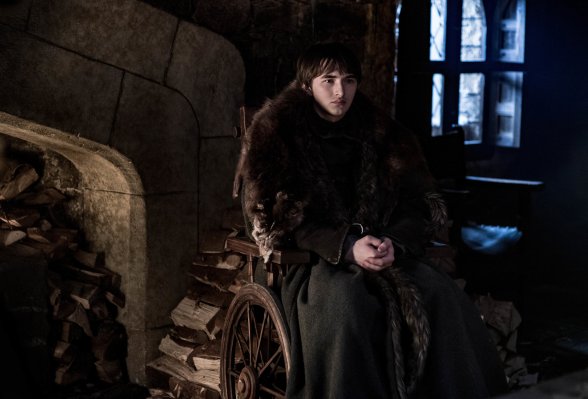 What Bran's Cryptic Clues About the Night King's Motivations Could Mean for the End of Game of Thrones
Next Up: Editor's Pick