The Game of Thrones mechanical map opening credit sequence — featuring an elaborate animated map of Westeros and Essos, stopping over each of the blockbuster HBO fantasy show’s prominent locations in the episode — is not just a fluffy intro to the show, now in its eighth and final season. The sequence helps set the scene and gives viewers an advance idea of what to expect in the episode, highlighting the main locations where the action will take place or where important characters are located. As the show has progressed over its eight seasons, so too have the credits evolved to match the changes; this season, for instance, the breach in the Wall is indicated with icy blue tiles that expand south into the heart of Westeros, right along with the Night King himself.

In a new interview with the credits’ creator, they discussed the retooled of the opening: “…all the little bits and pieces that we wanted to put in, they’re always kind of there, whether or not they are noticeable or if you actually pay attention to them,” Kirk Shintani, the head of the graphics studio that made the credits, told The Wrap. “And as the episodes progress, you know, as the set piece changes, the things that you notice happen later, you might find little hints of those same things in the previous episodes.” So it’s worth paying close attention to every little bit of this sequence for clues.

Here’s your guide to each of the locations on the credits map for the eighth season, from the weirwood in Winterfell to the doomed keep at Last Hearth.

Before we even get to the map’s locations, the opening sequence focuses on the engravings in the metal rings of an astrolabe, an astronomical instrument that depicts celestial movements. For the past seven seasons, the astrolabe engravings have been the same, depicting the Doom of Valyria, Robert’s Rebellion and the era of Baratheon rule. But this time around, they’ve changed to reflect more recent history. Now, our first sight of the astrolabe’s engravings shows us the fall of the Wall, with the undead dragon Viserion blasting through it.

When we make it to the Game of Thrones mechanical map, the first location the camera lands upon is the Wall, swooping down to it from the North. Now that the Wall has been breached, thanks to the transformed Viserion and his ice-fire attack with the Night King, we see the resulting gap — and a series of ice-blue tiles that flip as we head south, reflecting the progress of the Night King’s army as they advance through Westeros.

In the season eight premiere episode, Last Hearth is the first location to get a title on the map. It was once the stronghold of House Umber in the North; Greatjon Umber was one of Robb Stark’s most loyal bannermen. But when his son Smalljon succeeded him, he betrayed House Stark by giving up Rickon and Osha to Ramsay Bolton and is killed in battle by Tormund Giantsbane. The ensuing head of House Umber and Last Hearth, young Ned Umber, appears in the season eight premiere at a council meeting at Winterfell, where the Starks send him back to Last Hearth to fend off the army of undead. Unfortunately, the White Walkers overtake the keep: Tormund Giantsbane, Beric Dondarion and their band discover a deserted structure during a patrol in the season 8 premiere “Winterfell.” The young Umber leader’s body remains, gruesomely pinned up and surrounded by severed arms. Soon after he is discovered, he awakes as a White Walker and gets burned.

Winterfell, the Stark family home in the North, has been a regular map location in the opening credits since the first episode of the first season of Game of Thrones. With its familiar keep and the white-limbed weirwood standing tall, we’ve seen it before — but not quite like this. By the third episode of season eight, the blue tiles that represent the Night King’s progress have flipped all the way to Winterfell’s defenses, and a series of deep military trenches appear around the castle, lit up to represent their fiery uses. The camera travels inside Winterfell’s walls and underground, weaving through the crypt where all the famous Starks lie at rest. (And where plenty of important scenes have taken place, including Jon Snow’s discovery of his true parentage.) Shintani pointed out that one of the statues standing in the crypt depicts Lyanna Stark herself, Jon’s true mother. In the third episode, the torches that illuminate the crypt go dark as the credits cut to the next shot.

We have another glimpse of Westeros’s more recent history in this second look at the astrolabe, which depicts the Red Wedding: the Twins, seat of House Frey, are in the middle. On the right, a flayed man, the sigil of House Bolton, holds up the severed head of a wolf, representing Robb Stark. On the other side, a lion — symbol of House Lannister — looks on.

King’s Landing, the Red Keep and the Iron Throne

The credits continue on further south, down at King’s Landing, currently the seat of Cersei Lannister. In the new King’s Landing sequence, we enter the city, see the Red Keep and then dive inside one of the castle’s towers, taking a tour through the dungeons filled with dragon bones and then finally coming to rest at the Iron Throne itself, above which a Lannister lion is shown in the glass.

The final astrolabe rotation shows us four dragons — one large and in the foreground, the other three flying alongside — with a horde of horses (perhaps representing the Dothraki) below. A comet flies through the sky, most likely a reference to the Red Comet of prophecy, which heralds the birth of dragons. And those dragons can only harken back to one thing: Targaryens, particularly Daenerys and her “children” Drogon, Viserion and Rhaegal. 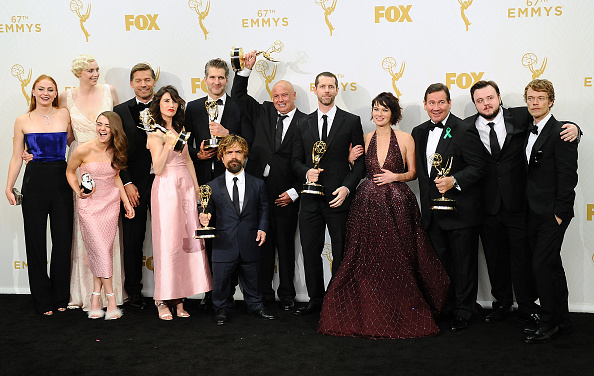 The Game of Thrones Cast Answers All Your Ridiculous Questions You Always Wanted to Ask
Next Up: Editor's Pick