Meghan Markle Raised Her Voice Against Inequality. Here's Where She Fits Into the Royal Family's Long Politically Neutral History

Today is International Women’s Day, and even Meghan Markle, the Duchess of Sussex is taking some time to mark the occasion by appearing on a panel alongside notable figures in England like Annie Lennox and Adwoa Aboah hosted by King’s College London.

“If things are wrong, and there is a lack of justice and inequality, then someone needs to say something. And why not me?” she said, discussing her own start as a voice for women based on a childhood experience where she became active in working towards equality. She also touched on her past work with girls’ education in countries around the world and her plans with the Queen’s Commonwealth Trust, an organization that supports young leaders worldwide, of which she was named Vice-President on Friday.

“It is about global feminism. It is about a parity and equality for all of us,” she went on. “It started at 11 [years old], but it still feels like it’s just the beginning.”

This is not the first time Markle has celebrated the annual event with a high-profile engagement; back in 2015, she delivered a speech at the U.N. Women conference about gender and equality. “Women need a seat at the table. They need an invitation to be seated there, and in some cases, where this is not available, well then… they need to create their own table,” she said then.

So Markle’s interest in women’s causes is no surprise, as many royal watchers and longtime Markle fans will already know. And it’s not necessarily a huge departure from the humanitarian work that others in the family like Prince Charles and Prince Harry have long taken on themselves.

It is still significant when royals get political, however, because of the Queen’s impartial relationship to party politics. “You’ve got to be very careful in terms of how anything reflects on the Queen,” explains CNN royals commentator Victoria Arbiter to TIME. “She’s a politically neutral head of state. And the family is very careful in terms of where they go, because they can’t cause her any embarrassment.”

This need for caution has been in place ever since the United Kingdom became a constitutional monarchy and reduced royal political powers in 1688. The reigning monarch is still technically responsible for a whole list of tasks, from appointing prime ministers to summoning and dissolving Parliament, and still holds the power to declare war and make peace.

But the stability of the U.K. government is based on the fact that the monarch has remained politically neutral as head of state in the intervening centuries. That’s certainly the case for Queen Elizabeth II, who has now been the U.K.’s longest-reigning monarch at 92.

That doesn’t mean other royals don’t dabble, however — as they are within their rights to do. “The royals have long gone as close as they possibly can [to politics],” says Arbiter, “but they limit it to the humanitarian side instead of the political side.” That means steering clear of taking a firm stance on a party issue like Brexit, for instance — although “in a roundabout way the Queen has talked about Brexit herself,” Arbiter noted, as when she made what people perceived as veiled references in a speech this year.

As for the Duchess of Sussex? “It’s not as if Markle appears to be inserting herself where it’s something not appropriate for her to comment on,” says author Leslie Carroll, who writes books of royal history and intrigue. “The fact that she’s an outspoken advocate for women’s issues — as she always has been — isn’t surprising.” Markle has publicly declared herself a feminist and supported menstrual products for girls in India; she also made headlines as Duchess of Sussex when she was seemingly drawn into the Irish abortion debate.

Her general work for women, it seems, has the stamp of approval of the Queen herself: Markle was recently made patron of Smart Works, a charity that supports unemployed women in their search for jobs, which “demonstrates the Queen’s trust in Meghan,” Carroll suggests.

The other royals have all had their own causes, too. Prince William has long been focused on conservation and wildlife preservation. Prince Harry has been particularly engaged in mental health awareness programs and vocally concerned about climate change. Princess Diana, soon after her divorce, worked to de-stigmatize AIDS and draw attention to the landmine crisis in places like Angola, which got her called out by politicians for interfering in what they saw as a political issue.

And Prince Charles, who was “preaching the horrors of plastics for decades” as an environmental supporter according to Arbiter, has courted controversy when he toed close to the political line by opting to write memos to make his case on policies. (The memos weren’t unearthed until years later.)

“William and Kate tread a finer line because they’re going to be king and queen eventually, so they have to be a little bit more beige,” explains Carroll of Harry’s brother and sister-in-law. Markle, meanwhile, is not part of the official royal line of succession, giving her a little more leeway.

As for women’s issues in particular, both Camilla, Duchess of Cornwall and Sophie, Countess of Wessex have supported women’s causes: Camilla has worked on providing support for victims of sexual abuse, while Sophie is chair of a women’s business cause and supports anti-sexual violence initiatives. “Meghan by extension is continuing that,” says Arbiter. Markle will also have the full guidance of a royal team to make sure that her rhetoric stays within the bounds of palace protocol, Arbiter and Carroll agree.

All eyes may be on Markle as she takes the stage this International Women’s Day, but her support of women is actually nothing new — or all that political — for the crown. “It is a fine line, but one she’s traversed well so far, and one that she’ll be very prepared for come Friday,” Arbiter says. 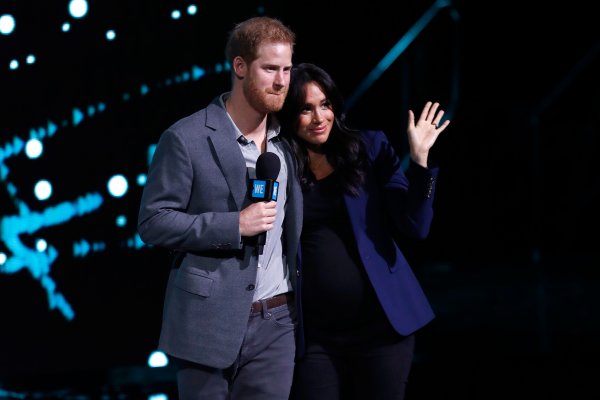 Meghan Markle Made a Delightful Surprise Appearance On Stage With Prince Harry
Next Up: Editor's Pick