How Donald Trump Lost by Winning

President Donald Trump during a campaign rally for republican presidential candidate in Warren, Michigan on March 4, 2016.
Scott Olson—Getty Images
Ideas
By Nancy Gibbs
Gibbs, a former writer and editor in chief at TIME, is the director of the Shorenstein Center and the visiting Edward R. Murrow professor at Harvard Kennedy School. She is the co-author, along with Michael Duffy, of two best-selling presidential histories: The President’s Club: Inside the World’s Most Exclusive Fraternity and The Preacher and the Presidents: Billy Graham in the White House.

Lots of people talk about winning by losing: diet gurus; self-help gurus; the Bible, where Jesus declares that “whoever wants to save their life will lose it, but whoever loses their life for me will find it.”

That may not quite be what Donald Trump had in mind if he did indeed expect to lose the 2016 race. “Mr. Trump would often say this campaign was going to be the greatest infomercial in political history,” his former personal lawyer Michael Cohen revealed in his opening remarks to Congress on Feb. 27. “He never expected to win the primary. He never expected to win the general election. The campaign for him was always a marketing opportunity.”

This claim was met with disdain from Republican Congressmen. But let’s stop and consider for a moment what it means if it is in fact true — for us as voters, and for all those candidates now and forever who will study the 2016 upset in hopes of harvesting lessons. Trump claimed he was all about winning — “You’re going to get so sick and tired of winning,” he told people — we should have sensed perhaps he protesteth too much. Losing was the far better course. Trump would be an even more powerful global brand; his marketing machinery would be greased by all the new friends he would make; his way would be cleared to build in Moscow the largest tower in all of Europe or to launch Trump TV or a line of gold golf balls. In Fire and Fury, the lively albeit disputed account of Trump’s campaign and entry into the White House, Michael Wolff recounts an exchange between Trump and then Fox News chief Roger Ailes a week before the election: “I don’t think about losing because it isn’t losing,” Trump told Ailes. “We’ve totally won.”

I met with the new president-elect a couple of weeks later at Trump Tower, when I was still at TIME and we were preparing our Person of the Year package. This was certainly one part of his victory. Trump plainly savored another TIME cover (a real one, in this case). But I recall something else, a sense that this was a man in transition, seeing his freedom slipping away by the hour, ditching his press pool to slip out to the 21 Club for a steak dinner, slowly realizing that nothing would be the same.

I can’t help but wonder how much his indifference to victory may have helped him achieve it. He could take any risk, break any rule, because he literally had nothing to lose. There was a liberated quality to his campaign, as there has been to his presidency, that we’ve seldom seen before: he loved the crowds, he craved the adulation, even as he rejected values and defied convention at every turn. Among other things, this made him the perfect candidate for our age, a living algorithm able to capture and hold our attention like a public strip tease or a car wreck or a carnival. Has there ever been a candidate who so flamboyantly embraced the gospel of P.T. Barnum, that there’s no such thing as bad publicity?

Some impulse, and disgust with the status quo, led many millions of voters to join the circus. Is it just true that every so often, people just want to see the mighty fall, see the mountains brought low? This is a fierce, weirdly democratic fire, when enough people feel angry or alienated or unappreciated that they remind the experts and the elites that no one is entitled to indefinite power. If nothing else, Donald Trump as candidate and president could be merciless towards Democrat and Republican alike; just ask John McCain, or Robert Mueller. He was about burning down the house, and indeed on election day, fewer voters cared about honesty or experience than who “can bring needed change”; Trump won 83% of their votes.

So for candidates who might hope to replicate Trump’s singular success, think again. What if he won in part because he never meant to, ran a campaign on a shoestring that played to his own appetites and ambitions and drew upon the power of insurrectionist zeal? Those lining up to run now actually want to win, plan to win. Even if another billionaire businessman jumps in, Howard Schultz, no longer the CEO of Starbucks, won’t be doing it as a way to sell more lattes.

“Donald Trump is a man who ran for office to make his brand great, not to make our country great,” Cohen told lawmakers. “He had no desire or intention to lead this nation, only to market himself and to build his wealth and power.” We will see how this passion play turns out; but after this week, Trump looks more and more like the reverse of the general who’s prepared to lose the battle to win the war. Instead, Trump won the battle he never expected, and seems each day more likely to lose the war — to see his brand dissolve and his empire fall and wish there were some way to go back and lose. 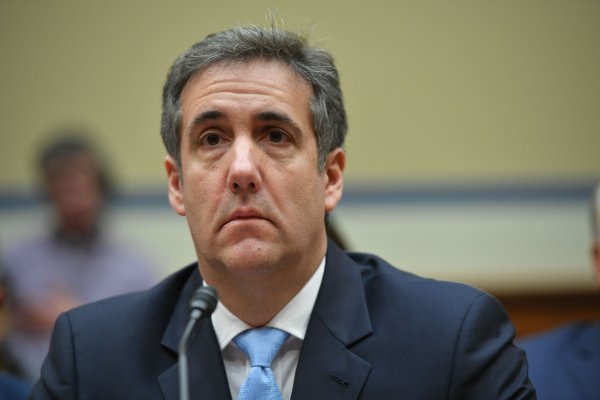 Trump Directed Ukrainian Oligarch's Money to His Personal Foundation
Next Up: Editor's Pick