8 of Emily Blunt and John Krasinski's Most Romantic Moments

Emily Blunt and John Krasinski are one of those fairy-tale Hollywood couples that only come around once in a blue moon: not only are they both talented and award-winning actors in their own right, but as a pair they’ve enjoyed a decade-plus romance that seems to only improve over the years, now with two daughters and a home in Brooklyn. From Krasinski’s early Devil Wears Prada obsession to their joint work in A Quiet Place, they’ve figured out how to to blend their high-profile professional lives with a low-key family life.

“The best days of my life started when I met my wife — that’s the truth,” Krasinski has said about their love story. “She’s one of the coolest people, she’s so talented, she’s beautiful, and she’s certainly out of my league.” Take heart: romance is not dead. Here are some of the most romantic moments they the golden pair have discussed in public.

When John opened up about his early love for Emily

Many of us are Devil Wears Prada fans. But Krasinski may be on another level. He’s admitted to watching the famous 2006 movie, in which Blunt plays a high-fashion assistant to demanding boss Miranda Priestly (Meryl Streep,) as many as 75 times — all before even meeting the actress and his future wife in person. That’s commitment. “When we first started dating, I didn’t know that she was coming over and I was watching it, and she was like, ‘Oh, what are you watching?’—and I quickly changed the channel to something dude-like,” he told Elle about his longstanding devotion to the rom-com, and the pains he had to take early on to make sure it didn’t get weird around his future wife.

When they fell in love at first sight

As the story goes, Krasinski was out to dinner with fellow actor Justin Theroux when Blunt ran into the pair and they were introduced through a mutual friend. Both have said they were happily single at the time, but the chance encounter changed their minds.

“It’s one of those things where, as soon as you meet someone, you kind of know,” Krasinski shared on The Ellen Show. “I wasn’t really looking for a relationship… then I met her and I was so nervous. I was like, ‘Oh god, I think I’m going to fall in love with her.’ And as I shook her hand I went, ‘I like you,'” Krasinski shared on The Ellen Show. “So if anyone’s looking to pick up a girl, that’s the way to do it. You don’t need any pick up lines; just be weird.” He added: “I guess she was charmed by my totally being an imbecile.”

Blunt had a similar experience; when she met, him “that was it,” she told Seth Meyers on a visit to his show. “It’s just kind of lame. I was in a restaurant. He was in the restaurant. I was sitting with a mutual friend. This is our romantic comedy,” Blunt joked. “Guys, it’s golden, it’s cinema gold,” she insisted. “He abandoned Justin and came over to talk to us. He did not eat. He just stood there and made me laugh.” And the rest, as Meyers noted, is history.

When they shared pizza for their first date

Blunt and Krasinski have different opinions about exactly who asked the other out; “It was me asking for a while and you took some time, and then we finally had a date,” Krasinski told The Hollywood Reporter. When they finally did connect, however, they ended up sharing pizza at Krasinski’s apartment. A bold move for a first date, to be sure, but the tried-and-true Italian food move clearly worked. There aren’t much more details beyond the menu, fairly. “It’s so precious, I don’t want to talk about it,” Blunt has said.

When they kept watching the same movie together

Horror movies are great bonding experiences. At least, that certainly seems to be the case for Blunt and Krasinski, who told TIME last year that they watched the classic thriller Jaws as many as nine times in the first few months of dating. In fact, it was one of the first movies they saw together. And what did they love so much about it? “The fact that in a genuine horror movie, the first big blockbuster in history, you have a scene that is one of the most beautiful parenting moments in film… It’s just beautiful,” Krasinski explained. (The pair now have two daughters together, four-year-old Hazel and two-year-old Violet.) Plus, the thrills experienced while watching scary movies can evidently have real psychological effects that contribute to feelings of love and attraction. Just movie magic.

When John popped the question

Blunt and Krasinski tend to keep some details quite private; Krasinski’s proposal remains somewhat mysterious. But we know it was definitely romantic and emotional. “All I can say is that there were flutes playing in the background, butterflies, there were angels showering us with rainbow drops,” Blunt joked to an MTV News reporter after the two became engaged in the summer of 2009. Krasinski has provided a similarly fantastical illustration of the scene: “We were here in L.A. and there were unicorns and oceans and clouds,” he told Access Hollywood back in 2009. He did note that the moment involved copious tears. “She did cry after I cried and we cried and then everyone around us was crying,” he added. “Then, I think people weren’t really sure what was going on, but they were crying because we were crying. But it was great.”

When they were married in Italy

While the wedding itself was a quiet and private affair in summer 2010, there are two salient facts that have come to light: it happened in Lake Como, Italy at George Clooney’s famously beautiful home. And Clooney was in attendance. That’s pretty much all we need to know. According to Krasinski, Clooney offered up his estate as many as four times before they finally accepted it as their venue. “‘I have this place and you should feel free to use it,'” Krasinski recalls Clooney insisting to them.

Not everyone has the resources to make long distance work. Neither does everyone have the energy for it. But Krasinski proved that his commitment was a step ahead of the rest when he flew — every weekend — from Montreal to London and back again while he was filming Tom Clancy’s Jack Ryan in Canada in 2018 and Blunt was working on Mary Poppins Returns in the U.K. “Family for me, it’s a non-negotiable thing,” he told PEOPLE while promoting the film. “So if I’m honest, I was shooting 6,000 miles away from them, and I flew back every single weekend.” Major points for Krasinski.

When Emily asked to be in John’s new movie

When Krasinski signed on to direct and co-write A Quiet Place, Blunt didn’t intend to be part of the thriller; they had steered mostly clear of working on the same projects. But after she read his script, she changed her mind. “I went sort of gray,” Blunt told The Hollywood Reporter. “I couldn’t imagine the thought of letting someone else play the part.” When she then asked Krasinski for the role, he was thrilled. “It was like she was proposing to me,” he said. “It was one of the greatest moments in my career. I screamed out, ‘Yes!'” Perhaps sometimes, the most romantic moments are finding a partner who can also be a part of your professional endeavors. 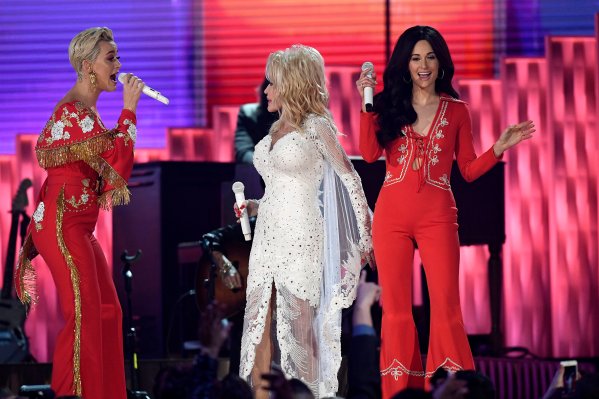