The NFL enjoyed a bit of a bounce back season in 2018. TV ratings rose, scoring spiked, the political controversies that overshadowed the 2017 season largely fizzed. Both thrilling conference championship games went into overtime two weeks ago. Forgive most fans for expecting two of the highest-scoring teams in the NFL, the New England Patriots and Los Angeles Rams, to end an upbeat season with a compelling, close offensive showcase.

Well, Super Bowl 53 split the difference. The offense may not have showed, unless you’re a fan of directional punting. But for all its flaws, Super Bowl 53 came down close to the wire. And in the end, maybe that’s all you can ask for.

The New England Patriots defeated the Los Angeles Rams 13-3 in Super Bowl 53, giving New England its sixth Super Bowl title; only the Pittsburgh Steelers share that total. Pats rookie running back Sony Michel scored on a two-yard TD run to give the Pats a 10-3 lead with 7 minutes left in the game. On that drive, we got a glimpse of vintage Tom Brady: He connected with two of his most trusted hands, Rob Gronkowski and Julian Edelman, on long completions to set up the game-deciding touchdown. (He threw two completions to Gronk. Edelman, who finished the Super Bowl with 10 catches for 141 yards, won Super Bowl MVP).

The Rams threatened on the next possession, but the pressure got to Rams QB Jared Goff — he lofted a stinker toward the end zone, a ball that was easily intercepted by New England’s Stephon Gilmore. The Pats got a few first downs on the next possession, and Stephen Gostkowski kicked a 41-yard field goal that barely made it inside the left upright to clinch it.

For football purists who appreciate defensive tactics, big hits and three-yards and a cloud of dust offense, Super Bowl 53 was a treat. But for the rest of us, not so much. Even CBS analyst Tony Romo, known for accurate play predictions and his Mr. Sunshine demeanor in the booth, said at one point “this is hard to watch.” A 53-yard field goal from Rams kicker Greg Zuerlein provided LA’s only scoring of the game, the lowest-scoring Super Bowl in history.

In the first half, millions of Americans — if they were still watching the sleep-inducing game — got very familiar with Rams punter Johnny Hekker, which was bad news for the Rams. He punted the ball six times in the half, as New England’s defense held LA totally in check. (In the second half, Hekker connected on a 65-yard punt, a new Super Bowl record. A bright spot, perhaps, for the Rams?) The Rams gained 57 yards in total offense in the first half. Edelman alone had 93 first half receiving yards. LA finished with just two first downs.

The Pats, meanwhile, didn’t fare much better. New England strung together more aesthetically pleasing drives; the Pats managed to move the ball down field. But in the first three times the Patriots crept in Rams territory, the possessions ended with a Brady interception, a missed Gostkowski 46-yard field goal, and a punt. A 42-yard Gostkowski field goal in the second quarter finally got New England on the board, giving the Pats a 3-0 lead that they took into the locker room, before Maroon 5’s Adam Levine lost his shirt on the Mercedes-Benz Stadium stage. These slow offense starts, however, are actually part of the Pats Super Bowl m.o. — New England had not scored a TD in the first quarters of the eight previous Super Bowls of the Tom Brady/Bill Belichick era. Combined, New England put just three points on the board.

This Super Bowl victory might be remembered as Belichick’s greatest work. The Rams are an offensive juggernaut, and boyish LA coach Sean McVay, 33, was treated all Super Bowl week as a wunderkind. All of his friends, it seems, got NFL coaching jobs or at least interviews. But Belichick’s game plan utterly confused Rams QB Jared Goff, and the LA offense. The old master schooled the phenom. He’s the best to ever coach the game. Belichick’s got six Super Bowls. And why should he stop piling up trophies any time soon? 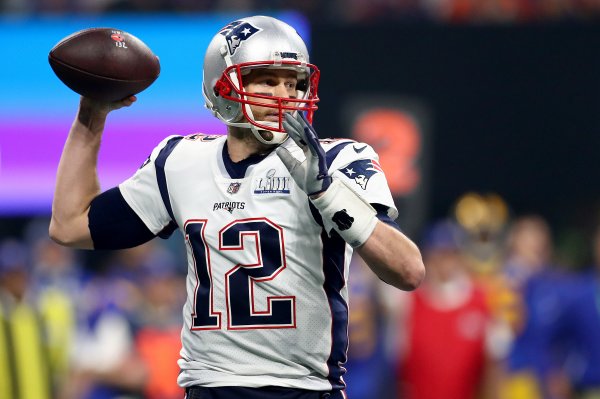 Spectators Can't Get Over Tom Brady's Early Interception
Next Up: Editor's Pick