Bob Dole Lived With a Disability for Decades. Here's How It Shaped His Life and Legacy

Bob Dole was just 21 years old when he suffered the injuries that would change his life.

In April 1945, while stationed in Italy during WWII, the young soldier was struck by enemy fire. As a result of his wounds, Dole was permanently left without feeling in his right hand and arm, which measured more than two inches shorter than his left after reparative surgeries; part of his left hand was also left numb. Dole, who died on Sunday at the age of 98, would live with and be shaped by the aftermath of those injuries in the years that followed, including the 30 he spent as a U.S. senator from Kansas.

While Dole, once a three-sport athlete, was initially left despondent by his injuries, he went on to speak about his disabilities openly over the years.

In a 1969 speech to the Senate, Dole spoke passionately about the challenges faced by those with disabilities, calling the community a minority group that “has always known exclusion; maybe not exclusion from the front of the bus, but perhaps from even climbing aboard it; maybe not exclusion from pursuing advanced education, but perhaps from experiencing any formal education; maybe not exclusion from day-to-day life itself, but perhaps from an adequate opportunity to develop and contribute to his or her fullest capacity.” From then on, Dole worked to advance the rights and protections of individuals with disabilities, most notably through the passage of the Americans with Disabilities Act (ADA) in 1990, a seminal piece of legislation that was meant to guarantee rights and improve the day-to-day lives of individuals with disabilities.

Disability rights and advocacy were also part of Dole’s (ultimately unsuccessful) 1996 bid for president against incumbent Bill Clinton. “President Clinton says, ‘I share your pain,'” Dole said at a campaign event that year. “I can say, ‘I feel your pain.'”

Of course, Dole’s wounds affected more than his politics. In 1996, he detailed for the New York Times the ways in which they affected his daily life, from getting dressed to eating. And in an interview with Ability magazine, Dole said his disability changed the entire course of his life.

“Having a disability changes your whole life, not just your attitude,” Dole said. “Prior to my injury I was a pretty good athlete, but afterwards I learned to apply myself more and made good grades for a change.”

That kind of total life adjustment is not uncommon, says Bill Fertig, director of the resource center at United Spinal Association, a nonprofit dedicated to improving the lives of those with disabilities.

“Each and every physical injury is different, regardless of what the diagnosis says, and each person experiences their loss differently,” says Fertig, who became paralyzed after a motorcycle accident about 20 years ago. “[But] the things that change are in your life, which then becomes a new part of your life. It’s the new normal.”

Michele Karel, a geriatric mental health specialist at the U.S. Department of Veteran’s Affairs’ (VA) Office of Mental Health and Suicide Prevention, says people have a huge capacity for adjustment, either after a catastrophic injury or during the normal course of aging. “Most of us imagine, ‘I could never live if I lost my vision, if I could no longer walk,'” she says. “We don’t imagine we can adjust, but then we do.”

The stresses of a long-term physical or cognitive disability can take their toll, and Karel says veterans who suffer catastrophic injuries are at higher risk of mental health issues such as depression and anxiety. But generally, through treatment, most individuals do eventually learn to adjust, even if that means reevaluating goals and priorities.

“If we have losses in some areas, it doesn’t mean we’ve lost everything,” Karel says. “We select the things that we’re good at, we select our strengths, and really optimize what we can do in those areas, and we learn to compensate for the areas that we struggle with.”

Marianne Shaughnessy, director of geriatric research, education and clinical centers at the VA’s Office of Geriatrics and Extended Care, says this process of acceptance tends to happen in three stages: people apply the lessons of their prior life experiences to develop coping mechanisms; use those coping mechanisms to adapt and build resilience; and lean on both care providers and family and friends for support. A key part of that support, Shaughnessy adds, is seeing people who have suffered hardship, like disability or catastrophic injury, and pushed past it.

“Anybody’s who’s suffered a catastrophic injury will tell you that the more support they have available to them, both formal and informal, is critical to influence the trajectory of recovery,” Shaughnessy says.

In many ways, Dole hoped to make himself a distant part of others survivors’ support networks, as those who came before did for him. When speaking to the Times in 1996, Dole reflected on the importance of President Franklin D. Roosevelt visibly using his wheelchair during a visit to a military hospital in Hawaii.

“He toured the amputee wards in his wheelchair,” Dole said. “He went by each bed, letting the men see him exactly as he was. He did not need to give any pep talk — his example said it all.” 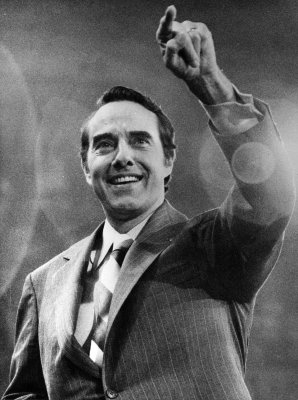