Collusion Isn't a Specific Crime. But These Four Things Are Against the Law

President Donald Trump once succinctly summed up his two-part defense on his campaign’s contacts with Russia during the 2016 election in an interview with the New York Times: “There is no collusion, and even if there was, it’s not a crime.”

In recent days, the first half of that defense has started to look shakier.

Trump’s own lawyer, Rudy Giuliani, seemed to indicate that more evidence may come out, telling CNN that he “never said” there was no collusion between the campaign and Russia, only ruling out direct involvement with the president. House Democrats are now investigating a BuzzFeed report that Trump told his personal attorney, Michael Cohen, to lie to Congress about the Trump Tower Moscow project.

That’s put more attention on the second half of the defense.

The president has a point. In the current political discussion, “collusion” doesn’t refer to a specific federal crime. As former federal prosecutor Renato Mariotti wrote in TIME in December, “the term collusion has no legal meaning in this context.”

That doesn’t mean no laws were broken, however. Based on the facts uncovered so far, experts say there are four broad areas where members of the Trump campaign could land in legal hot water.

Trump’s former campaign chairman, Paul Manafort, was convicted of financial crimes in a Virginia court in 2018, but he has since also been accused of lying to Mueller’s team in the course of his cooperation agreement that began after that trial.

In situations like this, it is often lying in the course of the investigation that can bring people down, instead of more sweeping charges about any underlying conduct.

“In the federal criminal-justice system, prosecutors have an incentive to charge crimes that are easier to prove—like lying to Congress or the FBI,” Mariotti wrote.

Mueller had already reportedly been looking into whether Trump obstructed justice when he fired former FBI Director James Comey, because Trump indicated that the firing had to do with the investigation into his relationship with Russia.

The BuzzFeed report raises another potential case: suborning perjury by directing someone to lie to Congress.

Cohen has already admitted that he lied to Congress, pleading guilty to the charge in November. But if it can be proven that Trump ordered him to lie, that would bring the president into riskier legal territory.

Many legal experts, including Trump’s Attorney General nominee William Barr, think firing an FBI director—for whatever reason— is within presidential authority and thin gruel in an obstruction probe. But directing someone to commit perjury is a clearer case of obstruction.

“The criminality alleged in this [Buzzfeed] story is—if true—unsubtle and unambiguous, directly related to the president’s conduct as president, and concerning matters of great import,” according to Benjamin Wittes and other writers at Lawfare.

Even Barr, who wrote a memo in 2018 outlining concerns about Mueller’s potential obstruction inquiry, has said the type of conduct BuzzFeed reports Trump engaged in with Cohen would be a crime. At Barr’s confirmation hearing on Jan. 15, before the BuzzFeed story came out, Democratic Minnesota Sen. Amy Klobuchar and Republican South Carolina Sen. Lindsey Graham both grilled him on that point.

“The president persuading a person to commit perjury would be obstruction, is that right?” Klobuchar asked Barr. “Yes,” Barr replied, noting that applies to “any person” directing another to commit perjury.

Graham also asked Barr, “If there was some reason to believe that the president tried to coach somebody not to testify or testify falsely, that could be obstruction of justice?” And Barr replied, “Yes.”

There’s even historical precedent for this very situation. As presidential historian Jon Meacham noted on Twitter, “The first article of impeachment against Nixon was just this: obstruction by directing others to lie. This is not hysteria or hyperventilating. It’s history.”

Contributions and donations by foreign nationals

The specter of this crime has been raised in a number of different instances in the Trump campaign’s dealings with Russia, including the June 2016 meeting in Trump Tower between Donald Trump Jr. and a Russian lawyer, along with Manafort and other attendees.

At that meeting, Russians had offered “to provide the Trump campaign with some official documents and information that would incriminate Hillary (Clinton) and her dealings with Russia and would be very useful to your father,” according to an email from a Trump associate to Trump Jr. “This is obviously very high level and sensitive information but is part of Russia and its government’s support for Mr. Trump.”

Trump Jr. and the Russian lawyer Natalia Veselnitskaya have said information about Clinton was never exchanged at the meeting. Whether this meeting broke election law could hinge on the definition of “other thing of value” — in other words, whether damaging information on Trump’s political opponent could be legally seen as a contribution of value from a foreign national to his campaign.

Experts say this act on its own likely wouldn’t constitute a crime, but it could be a piece of evidence to prove other crimes. In the court filing, it was in the context of a back and forth of Mueller’s team accusing Manafort of lying to them during his cooperation agreement, which could be a crime. But it could also fit into a larger conspiracy to violate election law.

“Manafort’s provision of polling data to an individual with strong ties to Russian intelligence [could be] a potential piece of evidence in support of a theory that the Trump campaign, or Trump himself, conspired with Russian actors to influence the 2016 presidential election through the expenditure of money,” James Gardner, election law expert at University at Buffalo School of Law, tells TIME.

In other words, if Manafort shared internal polling data with Kilimnik in an effort to influence where, how or if Russian nationals spent money on U.S. election efforts, that could be a conspiracy to break federal election law.

Fraud and related activity in connection with computers

Giuliani has repeatedly said “collusion is not a crime” and denied that Trump broke any laws. He also recently said, “There is not a single bit of evidence the President of the United States committed the only crime you can commit here: conspired with the Russians to hack the DNC.”

Giuliani’s statement gets to a key question about events during the campaign. In 2016, hackers that the U.S. government believe to have been directed by the Russian government hacked the Democratic National Committee and Clinton’s campaign chairman John Podesta. Batches of the hacked emails were released by Wikileaks.

Mueller’s team has reportedly been investigating whether Trump ally Roger Stone had a back channel to Wikileaks during the campaign or shared information he believed was from Wikileaks with the Trump campaign. If Stone simply knew Wikileaks planned to release emails in advance, that likely wouldn’t be a crime.

But if he — or anyone else — assisted or coordinated in the dissemination of the stolen emails, that could violate 18 U.S. Code § 1030, which covers fraud and related activity in connection with computers, or The Computer Fraud and Abuse Act, an amendment to that law. 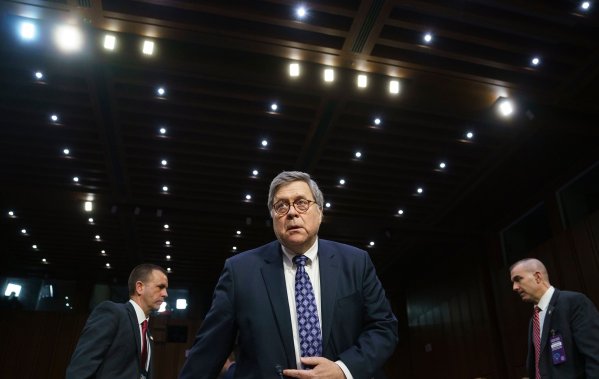 The Barr Effect
Next Up: Editor's Pick